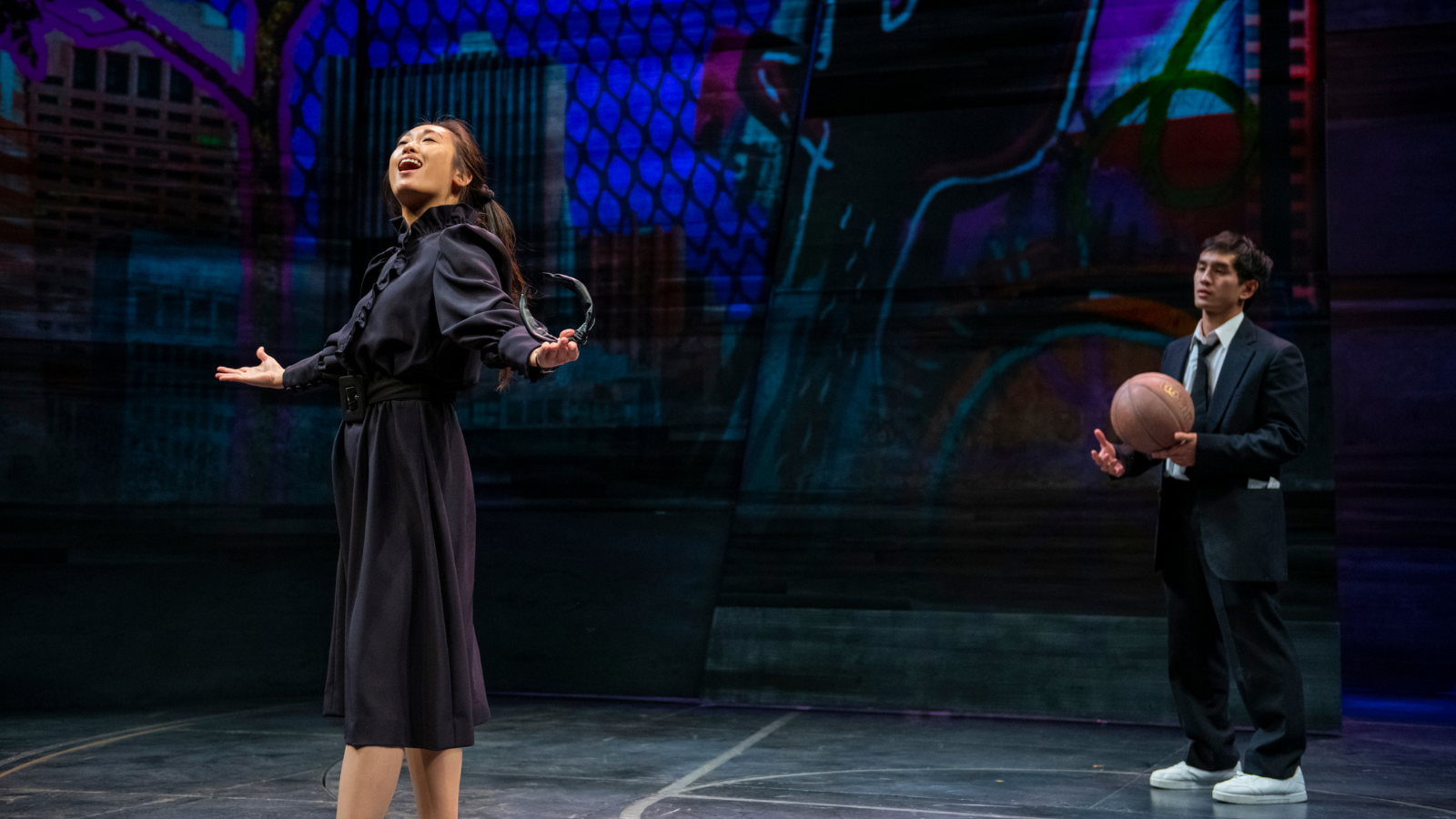 In October of 2021, the University of Hong Kong issued the removal of “The Pillar of Shame,” a memorial commemorating the thousands killed and arrested during the 1989 Tiananmen Square massacre. The bright red statue shows 50 bodies intertwined and forming a pyramid, in a display meant to serve as a constant reminder for the grotesqueness of the massacre. Along with shutdowns of museums and vigils meant to honor the victims of the event, the removal of “The Pillar of Shame” sparked heated discussions about how to remember Chinese history. Must we live with shame? And if so, what stories and images make us remember in the best way?

Lauren Yee’s The Great Leap, now at Bethesda’s Round House Theatre and streaming online, offers one potent exploration of these questions. Yee’s answer—which is vividly brought to life in this production—is to reconfigure Chinese history into a story between parents and children, mapping painful histories of nations onto the painful histories of family. In this so-called “socio-political fable,” allegory and memory are intertwined to both delightful and calamitous effect.

The show primarily takes place in 1989, traveling back and forth between Beijing during the Tiananmen Square protests, and San Francisco, where a Chinese-American community is still developing its relationship to the two countries.

One of these Chinese-American people is the high school senior Manford (Randy Nguyen Ta) desperately wants to join University of San Francisco’s men’s basketball team, and tries hyping himself up to the persnickety coach Saul (a hilarious Eric Hissom). Ta demonstrates Manford’s naivete and confidence wonderfully when he blurts out, “I am the most relentless person you have ever met and if you have met someone more relentless than me, tell me, tell me and I will meet them and I will find a way to become even more relentless than them.”

This sort of overblown enthusiasm eventually proves infectious for Saul, a man who himself has a relentless passion for basketball. Saul himself has been an ambassador for the sport, teaching it in Beijing during the 1970s to the shy but perceptive Wen Chang (an incredible Grant Chang). The purpose of the exhibition games between Saul and Wen Chang was to prove a newfound diplomacy between the East and the West. But an unintentional slight against the Chinese has issued a more competitive rematch in 1989, with the animosity that has simmered between the two different cultures reaching a boiling point.

The Great Leap’s ensemble proves adept at handling the show’s comedic moments, along with the politics structuring their character’s lives. Most poignant is the relationship between Manford and his cousin Connie (Lois Shih), currently the only other person who truly understands the struggles of bridging many societal divides. The show opens after Manford’s mother’s funeral, with Manford sullenly stating, “She was a stranger to me, some lady from China I never knew. We barely even spoke the same language.” Connie understands the grief that Manford, and many Asian Americans, have in not being able to fully communicate with their immigrant parents. Connie proves pivotal in transforming Manford’s outlook on family.

Once The Great Leap’s plot starts accelerating, Connie’s presence becomes smaller. It’s a real shame, because while women characters motivate most of the show’s narrative, most of the time they’re curiously absent on stage. The Great Leap is primarily a deconstruction of different kinds of masculinity, from Saul’s American aggression and braggadocio, to Wen Chang’s calculated determination, and Manford’s mixture of both. But if everything we’re watching is a fable, can’t Connie and the other female characters be staged in some non-literal ways, too? The most exhilarating sequence in the show is in an abstract rendering of a basketball game, where Jennifer Chang’s direction and Tony Cisek’s swirling set create an entrancing collision of sports, power, and family. The sequence proves that non-mimetic staging has the power to become just as powerful as realistic settings, a theatrical technique Yee might have applied to more elements of the show.

Along with the discussions of how to remember Chinese history, there’s been a recent discourse in the theatrical world about how much fantasy should be staged in historical plays. This has proved particularly complicated for plays featuring people of color. The musical West Side Story was based on a newspaper story about Puerto Ricans its white male creators had read, an entire community that just served as the backdrop for the Shakespearean fantasy they really wanted to tell. And the musical Miss Saigon was inspired by a photograph of a Vietnamese mother giving up her child to her American father, a photograph that the show’s white composers then used to construct an allegory that’s proved frustrating and devastating for many Vietnamese-Americans.

The Great Leap, like those other shows, provides a sort of revisionist fantasy for photographs and news stories from important historical moments. But the beauty of Yee’s writing is that instead of projecting a fantasy onto a group of people she barely knows, she’s instead composing a fable from the people she’s yearning to know intimately: her family. Yee has said she’s based the story loosely on her father’s own history playing exhibition games in China, and the sports “legend” her father was in his youth that she has no access to.

I’ll often look at photos of my Lolo and Lola, my grandparents who immigrated from the Philippines during the 1960s, and try to conjure unknown memories from small details in the frame. What was it like, stepping off of that plane, and soon learning that you couldn’t go back home? What shame did they carry that they would never express in words? Yee, like many family members of immigrants, knows she can never truly know that shame. When we’re left with fragments of history, it’s up to us to collect them and piece together a story.

The Great Leap is now in performance at Round House Theatre in Bethesda. For tickets and more information, visit here.