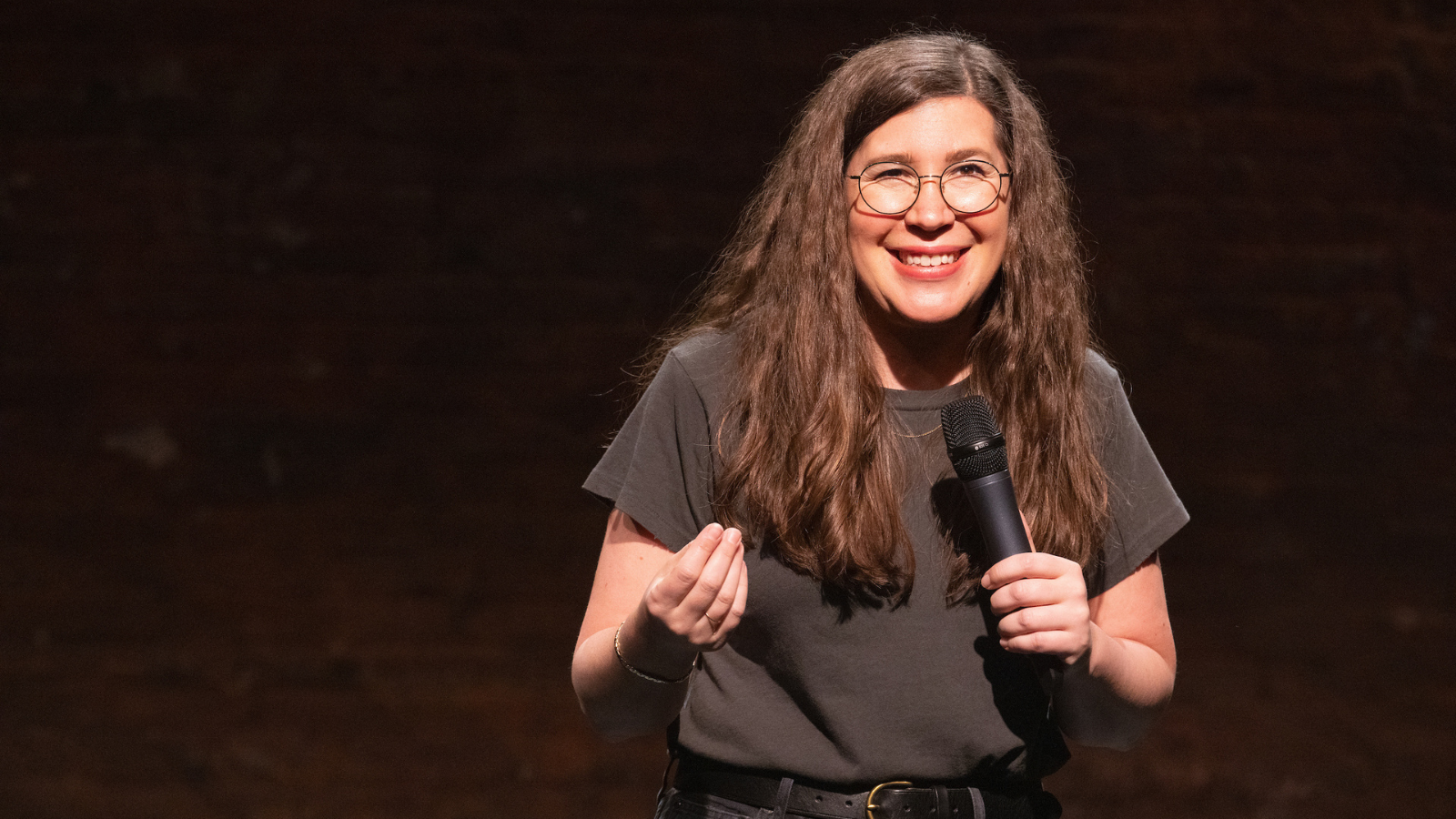 Presenting a solo show is hard enough. Make said show a comedy about abortion and you might hit some roadblocks and skeptics. Perform your show about abortion as news unfolds that the Supreme Court of the United States intends to repeal the 1973 decision of Roe v. Wade? Well, that’s exactly the challenge facing performer Alison Leiby.

On April 25, Leiby began performances for her solo comedy show titled Oh God, A Show About Abortion at Cherry Lane Theatre. Produced by Ilana Glazer (Broad City) and directed by Lila Neugebauer, Oh God… is a collection of stories where Leiby recounts her abortion and delves into greater themes of womanhood, autonomy, and relationships. There’s a balance of humorous anecdotes and a few hard truths, but overall, it is a monologue about a topic that remains acutely relevant. Despite the serious subject matter, Leiby’s presence throughout is so inviting, it’s as though Cherry Lane has become your living room and Leiby is just a friend updating you on the events of her week.

On May 2, political news outlet Politico obtained an initial draft of a majority opinion, written by members of the Supreme Court, depicting the intention to overturn the decisions of Roe v. Wade (1973) and Planned Parenthood v. Casey (1992), two cases that protected the right to choose to have an abortion. The Court has stated their intention to make a final decision by late June or early July of this year. Cut to Leiby: this abortion show just got a bit trickier.

Abortion fits into Leiby’s set just like the more mundane events—buying too many things at a chain drugstore, wanting to have a cool apartment full of plants, etc. Oh God… functions as an invitation to share and normalize a conversation that remains as divisive as ever. And in a world of doom-scrolling and dystopian ideologies, Oh God… is a welcomed tale of what could be possible with equitable access to life-saving and life-affirming medical care.

“As I started writing the material about it, I also started processing like, ‘Wow, this is not something we talk about a lot. And it really feels intense to be talking about it.’ I’m not trying to make people feel uncomfortable,” says Leiby, “I’m trying to make them feel welcomed into the experience, not put off by it. There’s so much about women’s lives that we don’t get to talk about. One of the early, underlying themes that I thought was interesting, and still maintain today, is that it’s a show about talking about things we don’t talk about.”

For many, this conversation starts with the title: Oh God, A Show About Abortion. It’s on every poster, every ad, and even in the background of the viral video of Anna Wintour being stopped for proof of ID and vaccination on her way to the show.

“I was very intent on having that title and that word in the title,” Leiby told Theatrely. “That was really early on. The tone is, of course, the reaction of somebody who sees the poster or hears about it because I think that we have in our minds this idea of what a one-woman show about abortion would be like—and it would be excruciating. This show is not that. I think it’s very fun and light and interesting, so [the title] is kind of tongue-in-cheek…I am not in the business of tricking anybody into seeing this stuff. I’m doing the show because I’m like, ‘I want to tell you the story and these things that I learned from it. And if that’s not a story you want to hear, you shouldn’t be here.’”

There is a distinct divide in audience members who have and will see the show: those who saw a performance prior to May 2, and those who bought tickets with the current events in mind. When I checked in with Leiby, post-Politico, the circumstances had clearly changed since the earliest performances…but not the content. If anything, that same objective remains, only becoming more vital at our current moment.

“I think my main goals are the same and have only been amplified. I don’t know if there are people that are on the fence about abortion—it feels like the kind of thing where you’re either pro or con. And it’s like, well, you don’t à la carte this thing,” Leiby laughed. “You mean everybody gets to do it. You can’t pick and choose who gets access, even though currently, that is what it is. Who gets access is very much contingent on where you live, who you are, what you look like...I think there’s a mosaic of experiences that we should be talking about, reminding people that this is what we’re fighting for.”

‍Oh God, A Show About Abortion is now playing at the Cherry Lane Theatre. The production has extended and will play through June 30. A full performance schedule and ticket information can be found at OhGodShow.com.