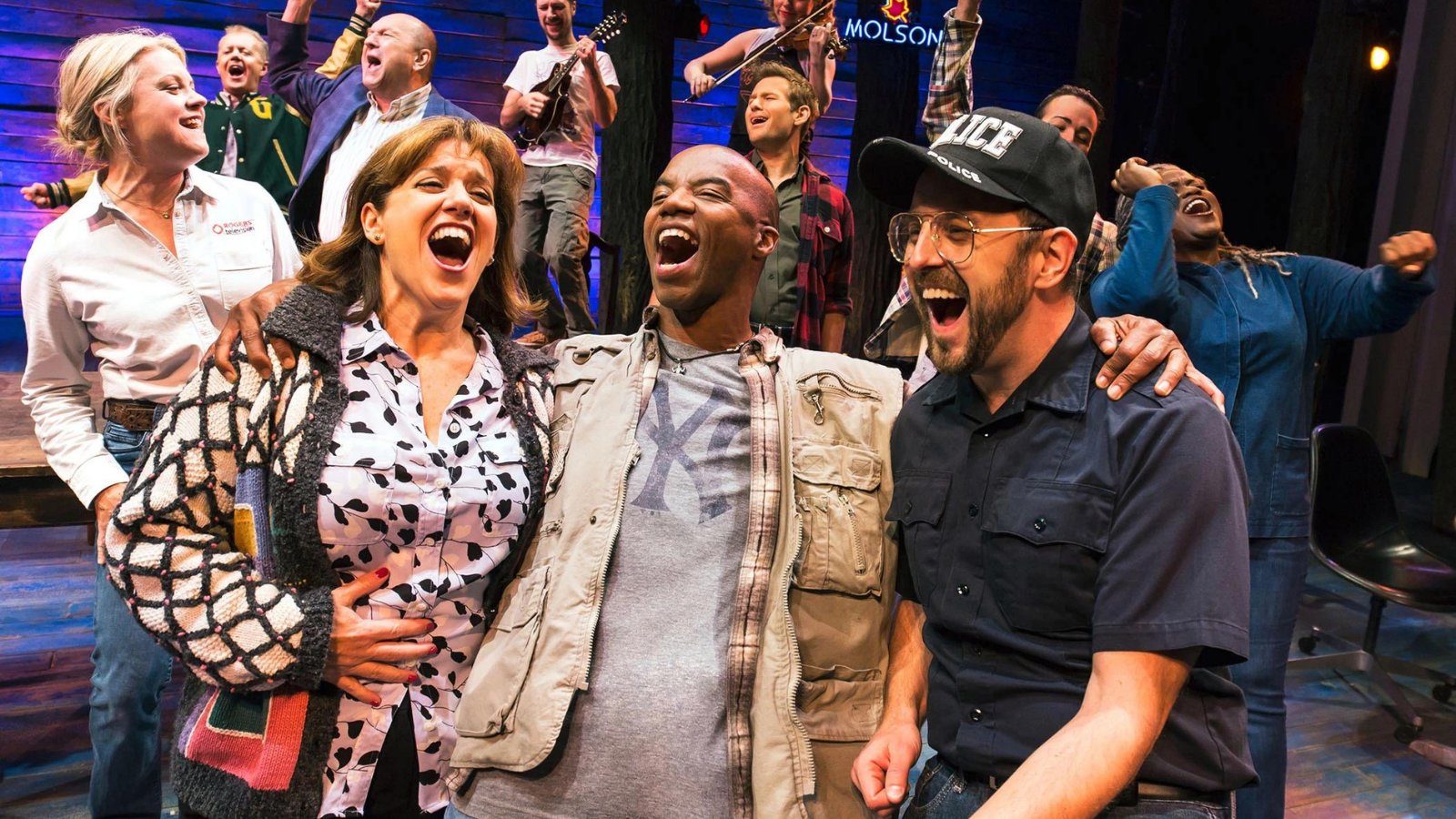 Sharon Wheatley (left) and the company of Come From Away | Photo: Matthew Murphy

By all accounts, even before 2015, Sharon Wheatley had a fruitful career on Broadway. From the final company of Cats to Les Miserables, Phantom of the Opera, and Avenue Q, Wheatley had fulfilled her childhood dream of making it to the Great White Way. Soon after, she left the business and moved to California, vowing to never return until one day a Facebook message changed the course of her career.

Enter Come From Away, an emotional new story from Irene Sankoff and David Hein that explores the kindness and gratitude of Gander, Newfoundland, a town that welcomed over 7,000 stranded passengers following the terrorist attacks of September 11th. Wheatley joined the company for its out of town tryout in San Diego and hasn’t looked back since.

I spoke to Wheatley via Zoom about the show, her upcoming book, and reflections on her seven-year journey with the musical. Our conversation has been edited for clarity and length.

Take me back to when you first got involved with Come From Away.

When I first got the audition, I had been out of the business for a few years at that point. I was really disillusioned by the cynicism in the business, and had become at peace with the idea that I was never going to be who this business wanted me to be in a way. I was always going to be a square peg trying to fit into a round hole — I wasn't Elphaba, I wasn't Christine Daaé, I just didn't fit. I was content saying four broadway shows was enough.  And I really felt like Kate Monster was as close as I'm going to get to be able to play somebody like me on stage, and that somebody like me on stage is actually a puppet.

I got a message asking me to come in — and I never got called in for new works. They knew I was in San Diego and they were looking for a local hire for the La Jolla Playhouse. I remember, I went in and didn’t even iron my shirt because I was just like, nope, no show business for me. I went in for the role of Beulah thinking I was never going to book it and I just had so much fun. I thought, wow, I really gave up too much — me quitting the business is robbing me of something that I truly love to do. And it has just been a wild ride ever since.

When you opened at La Jolla Playhouse, did you know it was going to be a hit?

We knew, we knew. The funny thing is, we knew before we ever had an audience, and I think that the scariest thing that we have ever done was the first preview of Come From Away because I definitely had a moment of shoot, now we have to have other people come in and sort of vote: is this a good show or not a good show? And we were having such an incredible experience. But we knew when there were 325 people in the audience instead of what we have now, which is over a thousand. You could just hear that roar and everybody jumped to their feet. I was like, “Oh, wow, yeah, I hope they keep me!”

One of the aspects I love about the show is each of your relationships with your real-life counterpart. I know Diane continues to see the show either here on Broadway or on tour. How has your relationship developed with her over the years?

I have this elderly aunt who I was very close to, and to me Diane is in that same category. I know she is close with all the Dianes and she loves all of us. We had a moment at Junior’s restaurant a few months back that was just so moving and personal and she started to cry. And if I’m stirring to sort of find her in a show or find the inspiration to do a show, I just go back to the very basics. Hearing her voice in my head, because her accent and delivery is so specific, it really helps. The more I bring her in, the better I do in the show.

After doing the show now for several years, are there ever moments where you zone out on stage or are you always 100% in it?

If I really need to zone out, I allow myself to take a little brain siesta during Q’s song because I’m just sitting on stage. But otherwise, we do it for each other. We really support each other. That's the beauty of doing a show where you've got 12 people and everybody's busting their ass for a short but very intense period of time. It’s also easy to remember going back to a year ago and remember not having a job and just reflecting on how great it is to be here.

And then Apple TV came along. What was that like?

It's like finding buried treasure. I mean, here we go, we have this show that we have done a gajillion times. It feels like there's no world in which there's another way that we can look at Come From Away, right? And then in comes the Apple TV film, and they ask us to do it. I was quite literally gobsmacked. And so when it came out, I think we all just sort of rode the wave of discovery along with everybody else. Nobody knew what to think; it hasn't really been done before. And getting all of those beautiful messages that I got on social media and phone calls and I still get them because people are still watching. I just go back to how lucky am I? How lucky am I that for whatever reason, Chris didn't happen to have an actress who could do it in Seattle and that I was picked. It's sort of like when people say, you know, I finally found the one I'm going to marry after they stop looking. I stopped working, I had quit the business, and then boom…a message pops up in my Facebook inbox. It's just the gift that keeps on giving.

You are writing another book! Tell me all about it?

Yes! Drive, Stories From Somewhere in the Middle of Nowhere. I'm a writer. I wrote a memoir forever ago and I wasn't sure if I would ever write another book. My experience with Till the Fat Girl Sings was awesome in a lot of ways and not awesome in other ways. And I think that for me, the experience of writing this book was about processing. I had both my parents die very close to each other, I had a lot happen basically from when I booked Come From Away in 2015 to when the pandemic happened and what happened during the pandemic, and a lot of my response to the pandemic was informed by things that had happened to me prior. My parents taught me to have grit and perseverance and so I packed up my family as soon as we closed in March of 2020 and just headed south in our car to Cincinnati. We rented an RV and got in an RV. Lots of people kept asking me, how did you have the foresight to do this? And I just thought, how did I? And so this book answers the question of how did I do it? Literally. And how did I do it emotionally? It's a lot about processing the grief of my parents and the lessons that they taught me. It's about parenting — how I was parented and how I parent.

Whether you leave the show in 5 months or 5 years, are you already thinking about what you are going to be taking from the set on your final day?

Oh no, but now it certainly is! I think chair seven for sure. All the chairs are numbered and I always joke that chair seven is mine because it's the black one I sing costume party in, and I’m always sitting in chair seven and it's alway my lucky number. Also probably will need to take my costume party sweater, of course, it's iconic.

Well hopefully you won't have to think about that for a long time!

My life here in my apartment is surrounded by items from the Cats set and the Avenue Q set and I’m always like, what am I going to do with all of this stuff?

What is one word that comes to mind when you think of your entire experience with Come From Away?

To me, I would say rebirth. Rebirth for me, not just on a personal level in so many ways, like to be back in New York, to be back on Broadway, but more of my sort of. It is a return to the theater that I believed in when I was a child and I just love it so.

Come From Away is now in performance at the Gerald Schoenfeld Theatre on West 45th Street. For tickets and more information, visit here.