SPACE DOGS Aim For The Moon, Land In The Stars — Review 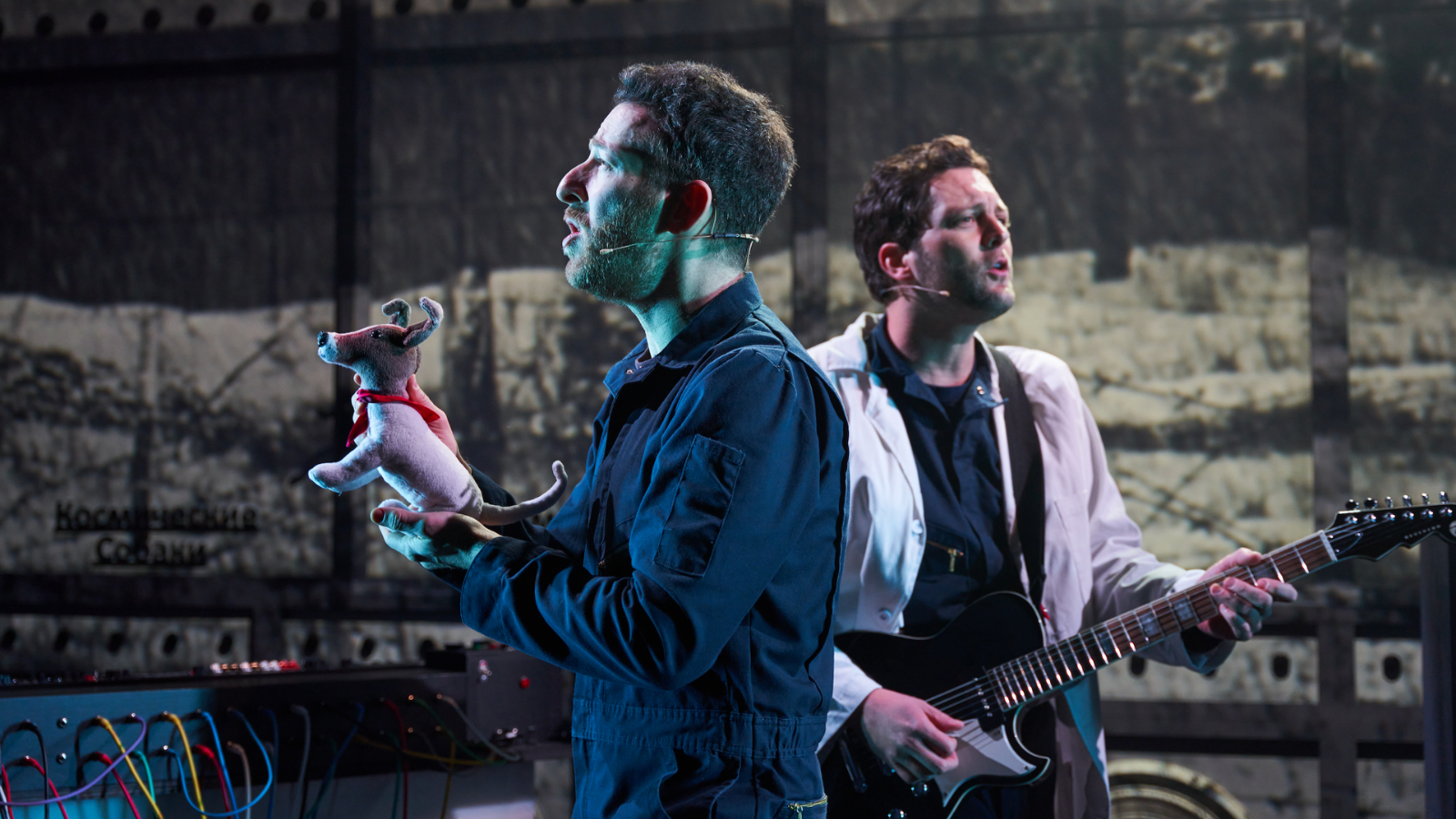 The thing about dogs is that everyone loves them, but everyone thinks their love is the most unique, and endlessly entertaining. It’s a trap Wes Anderson fell into with his punishingly boring 2018 film, Isle of Dogs. An meticulously crafted ode to man’s best friend, it featured a cast of canine puppets running around equally fussy dioramas for what feels like eternity, amounting to being trapped in your cousin’s room as he shows you his latest action figures: you can tell he cares very, very much about the work, but it just does not transmit.

Space Dogs, a new musical which just premiered at MCC Theater, narrowly avoids that naive self-involvement by the sheer lovability of its two creator-stars, Van Hughes and Nick Blaemire. Before tracing the story of the Soviet Union’s reliance on four-legged stays to stay ahead of the Space Race, the two inform the audience that they do not have to find the subject as fascinating as they, themselves, do. It’s a great line, though one that often scans as more of a warning than a joke — Hughes and Blaemire, for all the work they’ve put into delving into the story’s many aspects, are sometimes too fascinated by the material at face value to mine it for insight or comedy that would take the audience with them.

Luckily, the story is pretty fascinating. Plucked from the gulag to lead the Soviet’s accelerating space program, Sergei Korolev (Hughes) finds himself its Chief Designer, racing against the clock to keep Russia ahead of the US, and himself out of trouble. During these hectic times, he develops a strong bond with Laika, the stray dog who became the first animal in space, and is here represented by an adorable puppet (designed by Amanda Villalobos, and handled by Blaemire). In agile, sweaty performances, Hughes and Blaemire alternate a couple of roles, including the dozen or so other dogs, Lyndon Baines Johnson, Nazi aerospace engineer Wernher von Braun, and themselves.

Their songs, mostly riffs on ‘80s power ballads and stadium anthems, range as wildly from delightful to twee as they do from educational to emotional. There is a weird unbalance between the musical’s encyclopedic project and its forays into Korolev and Laika’s relationship, which acts as the show’s beating heart. Directed by Ellie Heyman and choreographed by Darrell Grand Moultrie, these emotional scenes achieve a slight miracle in their tenderness and, tied with Hughes and Blaemire’s lyrics, make the point that, in the end, we are all pawns in someone else’s game. Or, as Laika sings, “I got an itch I’m society’s bitch.”

The writers are remarkably skilled in creating deep empathy for Korolev and Laika’s relationship, more so than in the more straight-forward history lessons which can drain the story’s dramatic tension. Their Bill & Ted dudebro chemistry is electric and winning, and at its best when commenting on the history rather than just portraying it. One song has them chanting, “After World War Two, we hired a Nazi,” as strobe lights (by Mary Ellen Stebbins) blind us with the knowledge of the United States’ criminal passivity. It’s a clever instance of intervention — as is a Khrushchev deepfake (by Stefania Bulbarella and Alex Basco Koch) projected behind them later on — but one I wish were more frequent.

Wilson Chin once again proves himself a god among men, with his scenic design here appropriately DIY-looking but with room for impressive diversions. Concert amplifiers and screens make up the bulk of the set, though camera-ready green screens and a wall-sized Nikita Khruschev keep things fresh. How much that eye-popping Khruschev is Chin’s doing versus puppet and props designer Villalobos’, I cannot say, but the two work together brilliantly, with Villalobos’ furry creations often stealing the show.

A miniature barracks where the dogs smoke cigarettes and muse on their strange situations is meticulously crafted and hilariously deployed, as are the various other dioramas Villalobos contributes to the production. Her Laika is an impressively sympathetic creation whose clear emotional journey transcends the fact audiences will care about a dog’s wellbeing no matter what.

But, ultimately, we care about Laika because Hughes and Blaemire have written an impressively sweeping musical about the relationship between master and servant, man and dog, nation and honor. If sometimes laggy and seemingly frivolous, Space Dogs is a cleverly constructed, breathlessly performed odyssey through one of the 20th century’s oddest instances of playing fetch with historical glory.

Space Dogs is in performance through March 13, 2022 at MCC Theater on West 52nd Street in New York City. For tickets and more information, visit here.