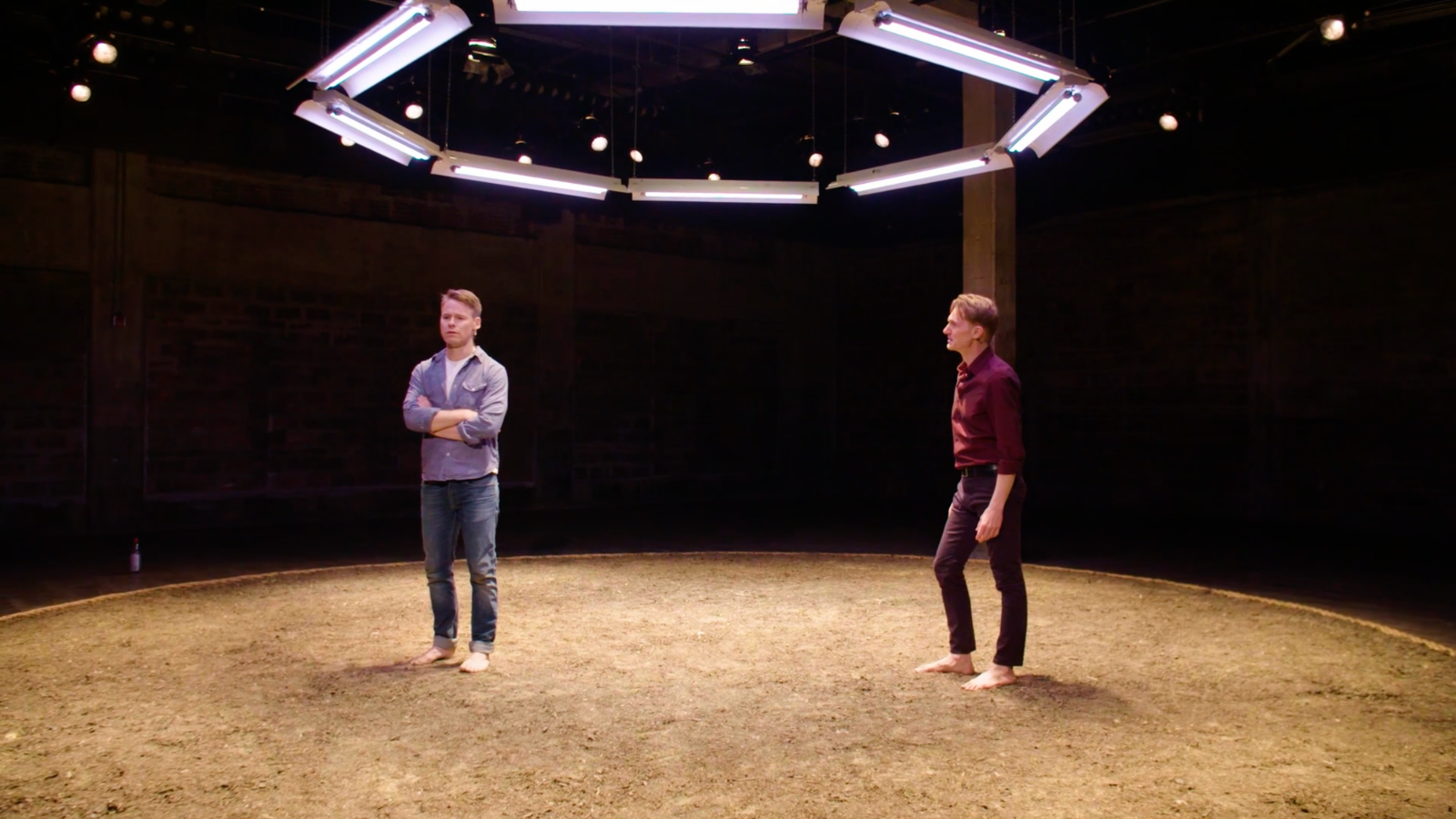 Emblematic of the blood sport from which the play was inspired, Studio Theatre’s streaming production of Cock exposes the rawness and vulnerability of the self-sparring human spirit.  Mike Bartlett’s play illustrates that, although we are passionate and desireful, our skepticism can lead to a battle not only within ourselves, but directly with, or against, the people we love most.

With minimal to no physical contact or scenery, theatrical director David Muse grants the play the literal breathing room it needs to allow the audience to process and grapple with the indecisiveness that throws our protagonist off-balance.  The dialogue and the nuanced performances are able to spearhead the stimulating conversation, and struggle, of an individual’s unique journey in their yearning.

Randy Harrison, of the popular Showtime series “Queer As Folk”, leads the cast of four in a stirring and riveting performance as John.  We meet John as he is in the middle of a tumultuous relationship with someone we only know as M, played with gravitas by Scott Parkinson reprising a Helen Hayes-nominated performance from Studio’s 2014 production.

Following a break-up with M, John finds himself tied in moral ambiguity after developing an intrigue with a divorcee whom he meets, played with tender humor and tenaciousness by Kathryn Tkel, known as W.

After alternating between partners, both emotionally and physically, John confronts W with the invitation to a dinner for the trio.  W confronts him regarding his cowardice and delusions; his actions and indecisiveness about who he wants to be in a relationship with do not sit well with either of his prospective partners.

Joining them at this dinner is F, M’s father, played jabbingly sly by Alan Wade, who may light the fire for John to make a decision.  F stirs the conversation towards John and the group of four takes turns backing each other into one of the metaphorical corners of the ring.

There does end up being a victor and a defeat in this metaphorical brawl, yes, technically.  But the strength of Cock comes from the ambiguity the audience is left with, mirroring that of John’s evolution throughout the 90-minute production.   Although a resolution is made, it is up to the individual audience member whether to proclaim the result as a form of settling or whether it is actually the best decision for all involved.

While it’s easy to want a yes-or-no/black-or-white result, just as the three challengers request from John, Bartlett really uses the script to get us wondering whether there is an in-between.

The DC-based theatre company’s streaming production of the award-winning play, reimagined from an earlier 2014 production, this time with video direction by Wes Culwell, is filmed with stable multi-camera cinematography and creative, well-crafted editing choices.  Set against the backdrop of a neutral in-the-round-like configuration, with technical direction by Jeffrey Martin, the action in Cock bares all, emotionally and physically, without leaning towards anything unnecessary.

Bartlett’s themes revolving around the passion for human connection and relationships are especially timely as theatres start to see a light at the end of the tunnel with reopenings scheduled across the country.  Considering the distance we are currently faced with adapting and conforming to, another uniqueness of Cock is the juxtaposition that we often burden ourselves with the idea of placing distance between others.

A technical triumph for digital theatre, and a clever conceit, this production is an invigorating experience that encourages us to not only overcome life challenges by facing them dead-on in the ring but that we have the ability to come out victoriously.  Whether we are the literal champion or not, we won by being willing to step into the ring in the first place.

“Cock” is available to stream through April 18.  For more information, visit here.