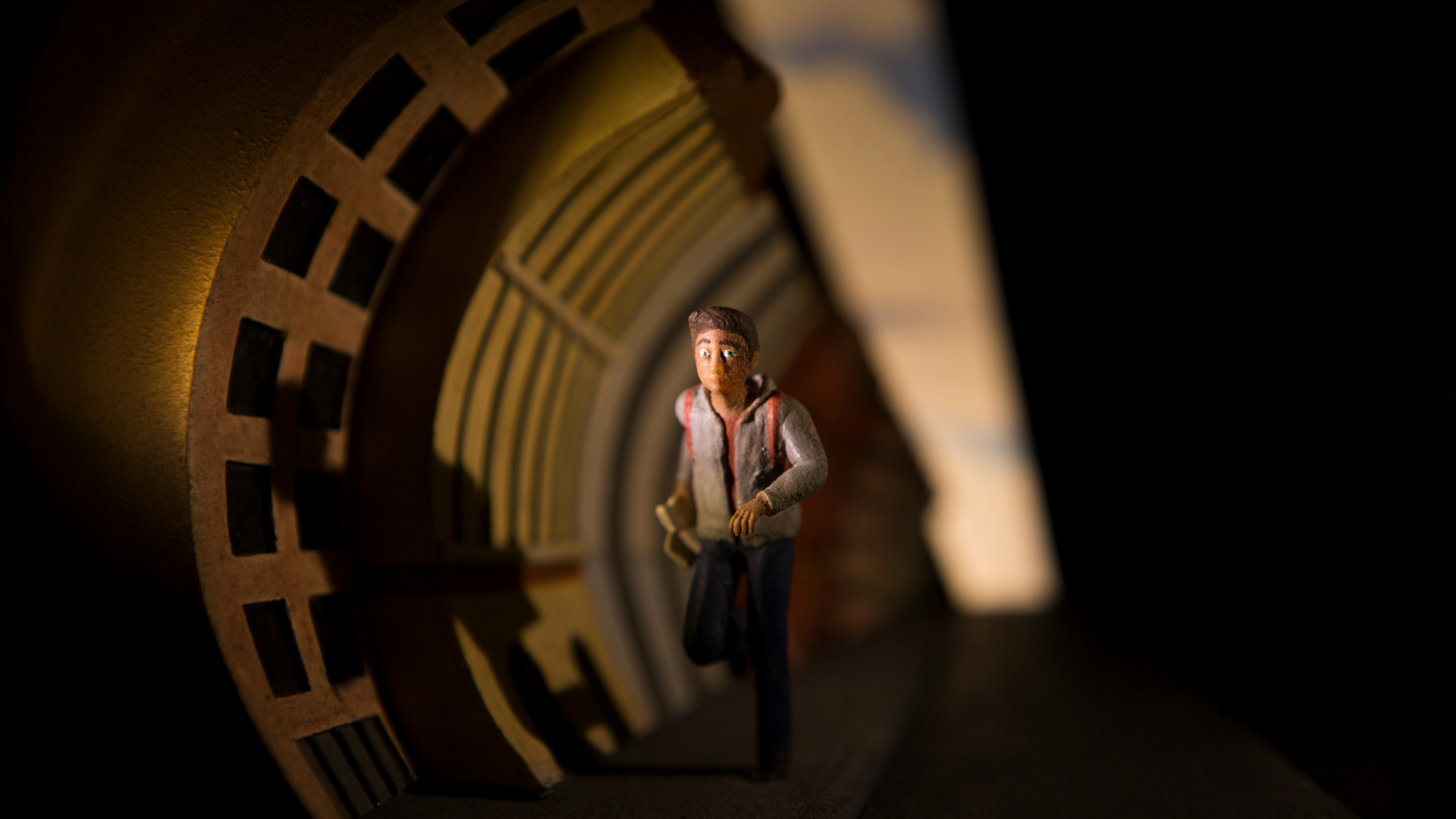 This past August, the fall of Afghanistan was witnessed by people across the globe, many of us watching news coverage on our phone screens. We could hold those illuminating rectangles in the palm of our hand, watching horrors unfold. With one click, we could also make the horrors disappear. The conversion of refugees from living people to just pixels on a screen can impact how Afghan refugees are characterized in the news. During September of this year, one AP News report described “two tiny dots dropping from [a] plane,” at the Kabul airport.

For journalists and storytellers, it’s an impossible task to narrate asylum seekers in real time. But weren’t those “two dots” real people? Doesn’t an abstract representation of an atrocity hide the reality of the people experiencing it?

Studio Theatre’s new show Flight doesn’t resolve these questions as much as it dives deeper into them with immersive storytelling and incredible detail. Instead of running away from the small images that often dominate refugee news coverage, the show embraces them, creating countless dioramas of refugees in miniature. Flight proves that small images aren’t necessarily diminutive in their impact. In fact, the small images in Flight conjure a different sort of power, one uniquely theatrical and purposefully abstract.

At the beginning of this 75-minute show, ushers guide you to sit in a small booth and put on headphones. In front of you is a constantly rotating platform, a slightly curved wall that lights up small dioramas in sync to the headphone audio.

The story that unfolds is one between two brothers, Aryan and Kabir. They have big dreams of running away from their home in Afghanistan, and recite the cities they plan on visiting like a mantra: “Kabul, Tehran, Istanbul, Athens, Rome, Paris, London.” The journey they take ends up far more perilous than their fantasies. Encountering troubled trips across borders, hostile men, and limited funds, the brothers cling to each other, searching for a new home.

The artistry of Vox Motus, the Scottish theatre company who designed Flight, is evident from the start. Vox Motus has designed settings rich with texture and depth: the crisp green grass of a hillside; the damp, cluttered streets of a city; the winding lamps of a highway.

These dioramas and character designs aren’t going for realism. Characters have large cartoonish eyes, and occasionally perspective is warped like a funhouse. But these designs allow for drastic changes in scale, from intense close-ups to sweeping vistas. Watching the boxes light up is like reading a great graphic novel: each new panel furthers the story, and offers a new viewpoint in space.

The story of Aryan and Kabir is archetypal but harrowing. There are glimmers of culturally specific dialogue, like when one of the brothers asks, “If I’m not in Afghanistan, am I still Afghan? Maybe I’m not anything anymore.” But mostly, the brothers feel like stand-ins for any refugee child. Just like Aryan and Kabir have been deracinated from their homes, they’ve also been deracinated from feeling like specific people. They’re the protagonists of an epic, taking on a mythological quality.

This choice probably reflects Flight’s long journey to creation. The show’s roots start with journalist Caroline Brothers, who originally wrote the novel Hinterland based on interviews she conducted with refugee children. Playwright Oliver Emanuel then adapted this narrative, collaborating with Vox Motus for productions in Europe and now the United States. Thus, it makes sense that Aryan and Kabir would transform into a kind of legend, fictionalized to protect the identities of real-life refugees.

But the best moments of Flight are when Aryan and Kabir acknowledge their status as myths, and start creating it themselves. For example, when the brothers interact with police officers, the officers are configured as large honking birds: a magic-realist translation of aggressive men speaking another language. The suggestion is that the myth of Aryan and Kabir isn’t replacing reality; it’s instead an expression of pain that shouldn’t always be realistically portrayed. It’s this tension between reality and fantasy that transforms the story into a gripping drama.

If there’s one place where Flight falters, it isn’t the dioramas or narrative, but the experience leading up to them. Having worked behind-the-scenes at a few immersive shows, I know that they’re logistical puzzles. Getting people to the right place at the right time is an artform within itself. So it makes sense that Flight would have audience members be divided into groups, and wait in a dimly lit area before being seated at a booth.

But isn’t that waiting time part of the performance, too? Non-proscenium theatre often makes audience members feel like characters themselves, going on a journey through space. The isolation, or perhaps intimacy, of watching Flight alone made me feel somewhat united with the brothers’ loneliness. But if audience members are going on their own hero’s journey, shouldn’t “crossing the threshold” feel more related to the refugees? I wish there had been a framing device for audience members—perhaps loosely giving us a role to embody, as many plays do—to clarify how the audience members are implicated with the miniature figures.

Even without this framing device, audience members are complicit with the plight of refugees just because of the country we live in. Can Americans truly understand the refugee crisis, when it is so global, so complicated, so horrific?

Flight doesn’t confirm that storytelling is the answer to understanding the crisis. But it does prove that grappling with the crisis, even in small ways, is necessary. Watching Flight, audiences transform miniature figures into fictional characters into real people, knowing that at each step, something is lost in translation. But isn’t that the strange power of theatre? Despite knowing that everything we’re witnessing is artificial, some real humanity finds a way through the dark.

Flight is in performance at Studio Theatre in Washington, D.C. through March 6, 2022. For tickets and more information, visit here.