TAKE ME OUT Finds Loneliness In The Diamond — Review 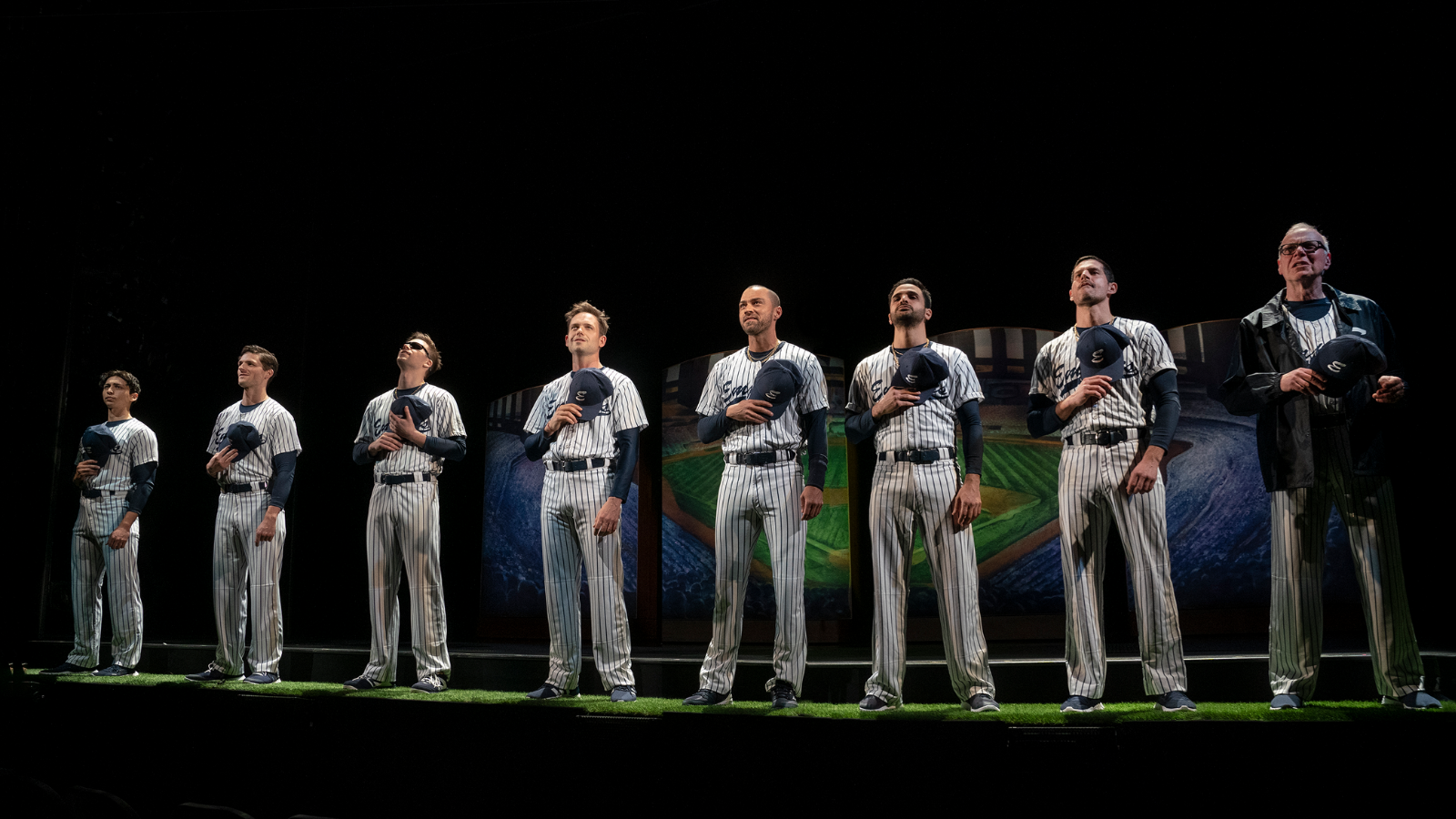 The company of Take Me Out | Photo: Joan Marcus

Move over, baseball: As it turns out, the most American pastime is crippling loneliness. Or at least an excellent case is made by the excellent revival of Richard Greenberg’s Tony-winning Take Me Out, now enjoying a starry, limited run at the Hayes Theatre 20 years after its original premiere. Starring Jesse Williams as center field god whose untouchable aura comes hurtling down after he comes out, and Jesse Tyler Ferguson as his fragile gay accountant, this production pitches isolation as the trembling thing hiding behind everyone’s mask.

In the world of 2002 baseball, the biracial Darren Lemming (Williams) is already keenly aware that he straddles a no man’s land when he announces his sexuality. He wasn’t lying before, he claims, just omitting. Is there a man in the picture that prompted this, asks teammate and narrator Kippy (a strong Patrick J. Adams)? Nope, but it might have been a recent conversation with a devoutly religious rival, effectively played by Brandon J. Dirden.

But who’s to say? Aside from his mastery on the diamond, people don’t get much from the very private Darren. Williams, in an impressive Broadway debut, makes sure the audience doesn’t either. Best known for his long run on Grey’s Anatomy, the actor wields the star athlete’s visibility well, with an easygoing calm bordering on smugness—although, this being Greenberg, hubris abounds. If at first it seems he’s giving the character nothing, the surfaces of his performance reveal themselves to be unknowable by design, masking a profound loneliness and self-imposed detachment.

He’s drawn slightly out of his shell by his new financial manager, Mason, who was almost certainly handed the account because of their shared sexuality. Ferguson embodies the character’s nervy personality with a monumental, memorable anxiety that threatens to quietly burst at any moment. A Chelsea-dweller who considers himself beneath the local gay scene, he strikes a tender friendship with Darren, whose celebrity lands him above it.

If Mason tugs him gently out of his stasis, new teammate Shane Mungitt hurtles him into action. Played by Michael Oberholtzer with fierce commitment to a thanklessly detestable role, Shane is a quiet kid hailing from nowhere except his traumatic, orphaned childhood. When he finally opens his mouth for a televised interview, the slew of casual racism towards his Black, Latino, and Asian teammates almost pales in comparison with the homophobia he holds against Darren.

What follows takes the play from workplace sports comedy to procedural drama, to an investigation of modern solitude. Scott Ellis directs the all-male cast to stand removed from each other, single, searing spotlights (by Kenneth Posner) often separate the characters, their intimate conversations often happening from across wide chasms. Standing starkly side-by-side against David Rockwell’s sparse set, what seems like fan-worship glory when the teammates are introduced comes to be more devastating than a set’s missing baseball card.

In an otherwise stellar production of a stunning play, there is one issue I take with the portrayal of the team’s two Latin-American players, who grunt mostly among themselves, and in Spanish. Their terse, crotch-grabbing machismo wouldn’t bother me as much if it weren’t such a stark contrast to the Shakespearean philosophizing granted to the three leads. Not that the rest of the teammates are paragons of refinement — and the idea seems clearly to be that each member occupies his own isolated world, just as everyone in this play is an island — but keeping them such hypersexed stereotypes left a bad taste in my mouth. Different times, those early aughts…

The emotional wallop packed by Take Me Out took me by surprise. The last time I engaged with a baseball-centric Broadway tale, watching the Damn Yankees film, I was left watching, well, baseball. But this convincingly-acted, blistering drama more than earns its championship title.

Take Me Out is in performance through May 29, 2022 at the Hayes Theatre on West 44th Street in New York City. For tickets and more information, visit here.