TAMBO & BONES Transcends Time In More Ways Than One — Review 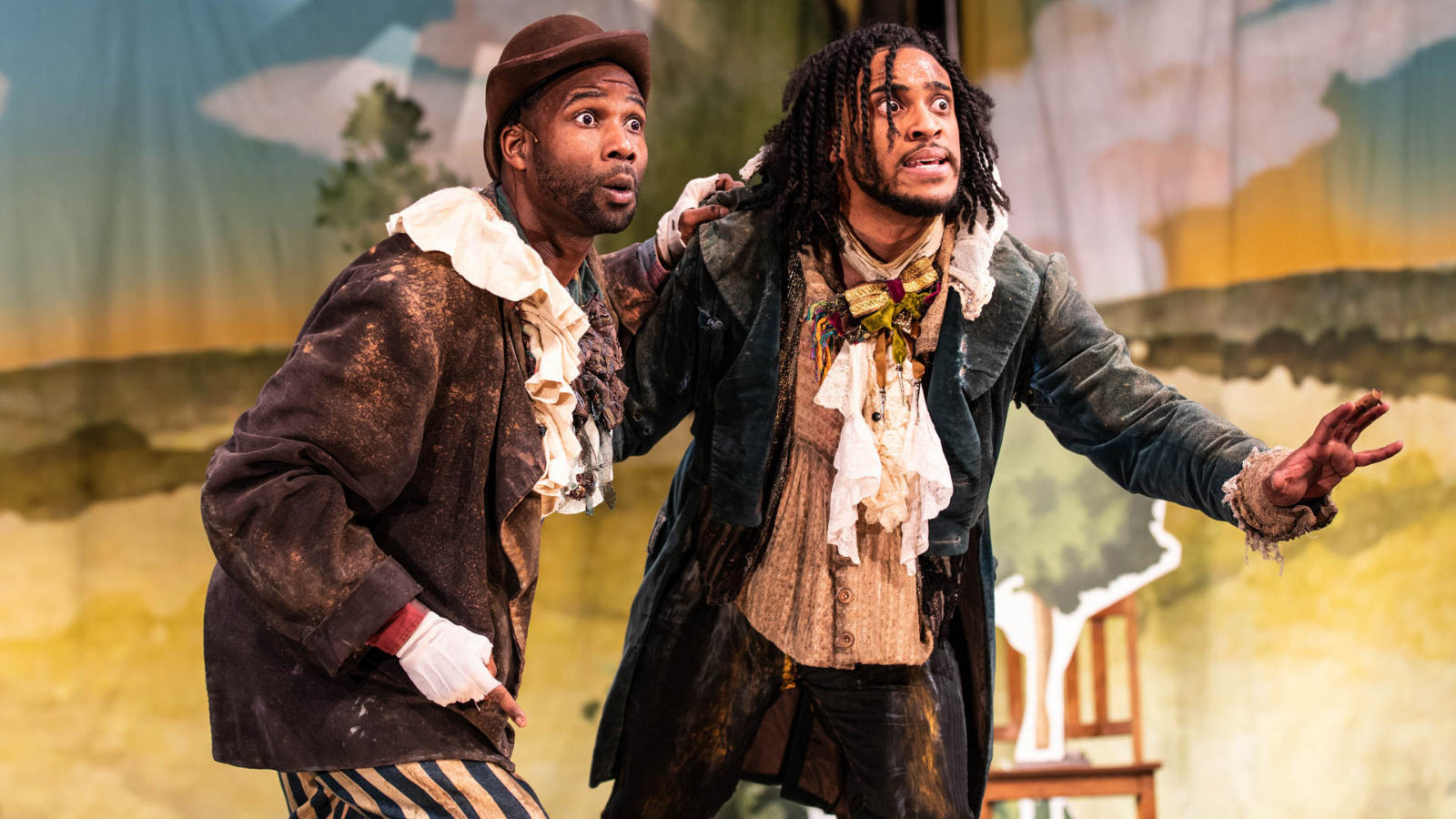 Two n*ggas in search of quarters and dollars supplant white supremacy via genocide. That’s the plot of Dave Harris’ Tambo & Bones―a confrontational blitz of metatheatre that tests the limits of language as well as its capacity to accurately breathe life into capitalistic power structures.

It’s a trippy experience that evolves over three acts from a minstrel show of sophomoric strivers into a rap concert of sellouts and finally, the murderous history lesson of an alternative future.

That’s a lot to accomplish in 90 minutes, particularly for a self-aware lampoon of modern-day mores. T&B succeeds largely thanks to Taylor Reynolds’ canny direction and embrace of the play’s spirit of confrontation―without pandering to white fragility.

Let’s jump back to the beginning. Playwrights Horizons’ latest premiere opens its curtains on a rickety pastoral scene. A flat cardboard sun hangs from a burlap rope as it shines over rows of fake grass and propped-up, painted flat panels of trees and hedges. This could be the tightly budgeted set of any elementary school in Anytown, USA, except that Tambo (W. Tré Davis) is the star.

Tambo hops onstage with the mirth of a “wascally wabbit” as he waters his garden and lifts trees onto chairs―the better to create shade for his lazy nap. Bones (Tyler Fauntleroy) upsets this calm with a flurry of panhandling to the audience for quarters.

After failing to elicit a shower of coins with his sob story, Bones attempts to earn his worth with a disastrous knife game. He cojoles Tambo into joining him by revealing that the primary difference between a Black n*gga and a white n*gga is being broke; currently they are both Black, broke and, to their horror, bedecked in the tropes of a minstrel show’s dopes.

Incensed at their existence, they hunt down their creator―a puppet incarnation of the playwright―murder him in retribution, and luxuriate in the bowels of his demise. That temporary satiation fades as the two realize that they are playing with pocket change when their priorities should align with white delights: dollars. In a bid to cash in on their pain, they launch a national tour and rack up ardor from their new fans.

Trouble in paradise returns when Tambo decides that it is not enough; he may be Black and rich, but he is still reduced to playing a part. Plus he wants to heal the world. Bones has no such niggles―as long as his pockets are lined and his grill is made of gold, he is happy.

After an artistic break, the two reunite and move into supplying weapons to both sides of their continuously fractious world. In an unexpected twist, the play fast-forwards for a denouement, during which two malfunctioning robots (Brendan Dalton and Dean Linnard, eerie and heartbreaking) unearth their world’s eventual history. In a flip on power dynamics, the ghosts in their shells remember that they are supposed to be more than their functions only to receive what James Baldwin called the consequences of being Black and conscious in America.

The entire cast is simply smashing. Davis maintains Tambo’s wide-eyed innocence even as the character’s ambitions for peace lead him towards murder. Tambo is essentially a child who discovers the severing effects of dropping a penny from an airplane and develops a sense of responsibility toward those who lack coins―but refuses to stop tossing his wealth off. It’s a tricky balance, but Davis expertly excavates the gradual awakening that overtakes a former religious fanatic who finally recognizes the folly of their ways.

As Bones, Fauntleroy portrays his opposite, exquisitely by constantly coaxing Tambo and the audience along. That his characterization has as much subtlety as a mustachio-twirling, Wall Street robber baron with eyes on fleecing every orphanage in the world adds to the pleasure. Bones is a morally repugnant character who recognizes the game and takes pleasure from subverting it to his will.

Acquiescing to venality, Fauntleroy all but orgasms across the stage as Bones ascends to power. But he manages to retain his charm by eschewing smugness. Rather than flaunt his swagger, he revels in pleasure. There is a razor-thin margin between embodying riotous hilarity and obtuse abrasiveness―Fauntleroy looks like he is having a ball as he juggles those pairs: a n*gga who's made good and an idiot who believes his own hype.

Both actors give full life to their con artist-like rapper incarnations; rather than hit their verses hard and heavy, they lean back and flow because they know that giving the crowd anything more than what it wants would be inefficient. Justin Ellington's original music for these sequences perfectly synthesizes the ersatz “kids bop” quality of a Macklemore & Ryan Lewis group―it sounds like it could be rap, but we know it isn’t because it lacks sincerity. Similarly, Harris’ lyrics reveal the pretentiousness of artists who swear that their slick product is filled with meaning.

T&B is certain to anger certain people. Some will likely call Harris hostile to white people―for instance, the audience member who, according to the playwright's tweets, stormed out of a preview performance in a rage while knocking tables about, dashed outside and hurled a planter from a neighboring restaurant onto 42nd Street.

Much like the seditionists of January 6, such people are missing the point. Harris is not only attacking their “American Dream,”; he is also critiquing Black celebrities’ eagerness to sell out to the white gaze all while purporting to promote equality. For my part, the show reminded me that securing Beyoncé’s or Drake’s swag will not lead to Black liberation―and that everyone should side-eye the stans who sacrifice their all without realizing what they are actually buying into.

Beyond the shock and awe of Mextly Couzin and Amith Chandrashaker’s lighting design and the absurdity of the minstrel-show pageantry, Tambo & Bones serves a potent warning to majority populations who lord it over disenfranchised classes. The late civil rights activist Audre Lorde may have claimed that “The Master’s Tools Will Never Dismantle the Master’s House,” but that’s only true if one is playing the “master’s” game. Harris, Reynolds, and company are not.

Premiering as it does during the second week of Black History Month, one wishes that the kidnapped Africans who built this country could be transported in time to witness Tambo & Bones’ manifestation of their wildest dreams. Since they can’t, I suggest that everyone else make the pilgrimage down to Playwrights Horizons in their honor.

Tambo & Bones is now in performance at Playwrights Horizons through February 27, 2022. For tickets and more information, visit here.