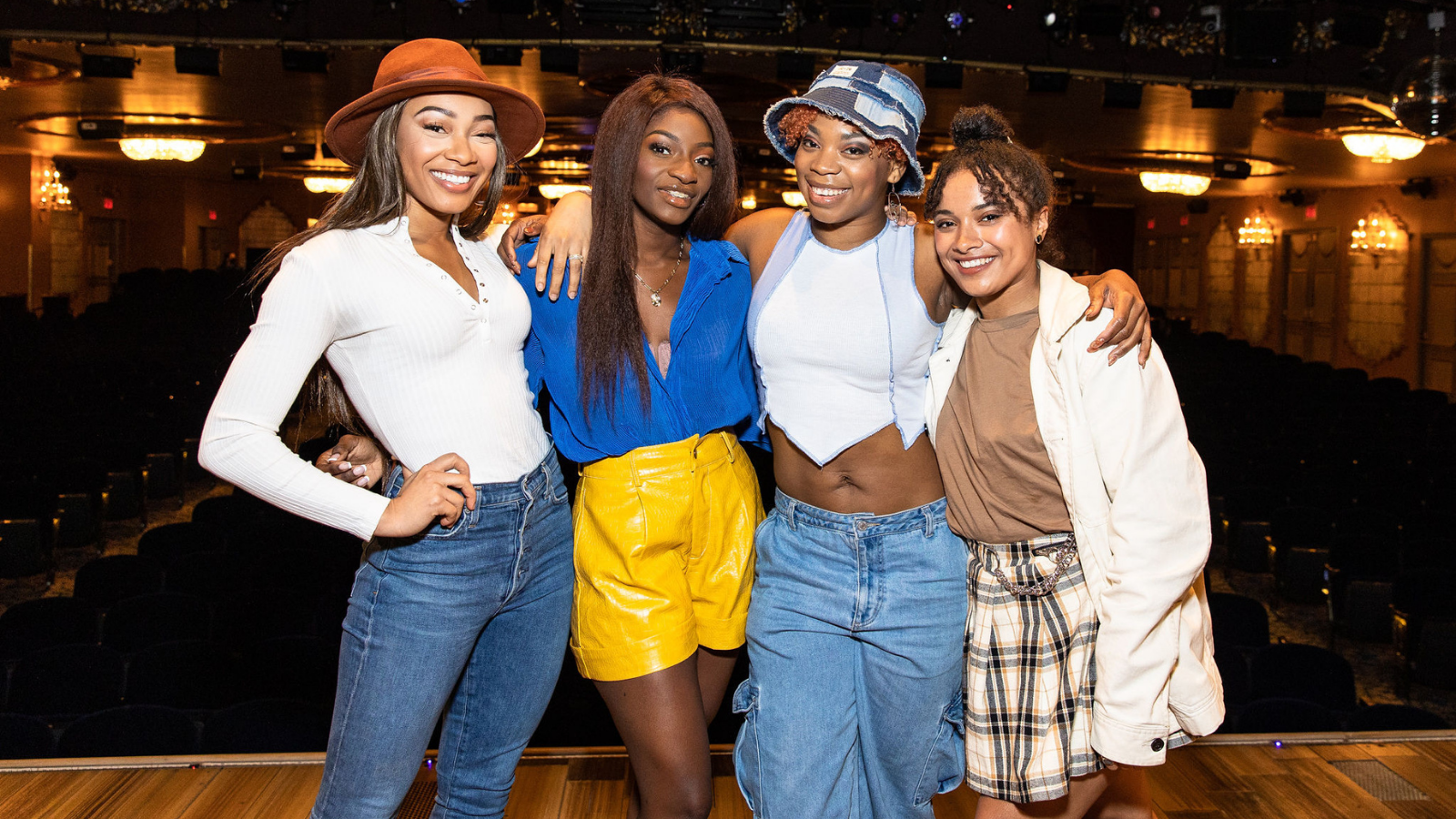 Since opening on Broadway in November (October) 2019, Tina: The Tina Turner Musical has rocked the Lunt-Fontanne Theatre eight times a week. Of course, the title star leads the show, but it’s the backup singers and dancers, the Ikettes, who keep the energy alive for a pulsating two-and-a-half-hour performance.

Currently, the Ikettes are played by Ari Groover, Leandra Ellis-Gaston, Ayla Ciccone-Burton & Holli’ Conway. To celebrate their power status as scene-stealing favorites (the dance moves! the voices! the style!), Theatrely sat down for a roundtable discussion about their sisterly bond, how their performance reflects Tina Turner’s real life on the road, and why the musical has some serious staying power.

Check it out below—for more photos, check out our Instagram. This interview has been condensed and edited for clarity.

‍What is your favorite part about being an Ikette?

Ari Groover: The Ikettes really set the style of the show. When you see them, you really see the embodiment of Tina and how she started. I know it is called Tina, but for some reason, the Ikettes really expand her world a little bit. And you can see why she made an impact, because they are the style and the essence of what Tina is.‍

Leandra Ellis-Gaston: Something I think is important, and that’s exciting about the Ikettes, is that the movement is ancestral. It’s of a time where there was this Black thunder inside of Black bodies. When I’m doing the movement, I feel like I’m doing it for my mom, for my grandmother, for her grandmother, for her people. It’s something inside…that makes me feel like we’re doing an electric slide, even though it’s not an electric slide, you know? Something that feels very community-based about it. Even if I’m doing a movement by myself, I’m translating to somebody who’s feeling what I feel and they can resonate with it.‍

Holli’ Conway: There’s four of us here and we have four swings. Two of our Ikettes cover Tina, and one covers Tina and is the dance captain. So, this show is constantly changing, and the energy of the Ikettes does as well—and it really shows on stage. I think it’s a different show depending on what combination of Ikettes you have. And I think it really reflects Tina’s life, because if you look up the actual Ikettes, there were 90 of them. So, you get a peek into what Tina has lived through. I mean, she had this terrible relationship with Ike, and all she had were these sisters to carry her on… she has a few that she talks about that she has a great, strong connection to.

‍Ayla Ciccone-Burton: I think to piggyback kind of off that ...I think we as Ikettes, even though we’re in a part of her darker side of her story, I think we bring a lot of the joy to that part of it. We’re there for a lot of her joyous moments... Having this sisterhood with her. So there are so many times where we are really just kind of like playing with each other on stage, even though there was a lot of darkness happening in those points in time.‍

Do you feel that sense of sisterhood backstage? Do you hang out outside of the show?‍

‍Holli: Leandra was a bridesmaid at my wedding; the other two original Ikettes were bridesmaids in my wedding, too…we’re very close. Ayla just joined us post-pandemic, and we hang out all the time. We take a train home every night… and Ari joined us before COVID.‍

Ari The show shut down the day after I joined [Laughs]‍

Holli: We share a dressing room, so you just have all these different intimate moments that you have with each person.‍

Ayla: And it’s like how [Holli was] saying, the switching out of women, as well… we take care of each other in those with switch outs as well, which is a parallel to what is happening on stage. It’s really what’s happening with us.‍

Ari: It is a roller coaster.

Ayla: It depends on the day, it really does.‍

Leandra: At times, it can electric back there, and other times it can be robotic. Those would be like the two extremes, I would say… but I think there’s a reflection of what's happening on stage is what’s going on backstage. This might be the biggest show [in terms of literal size] on Broadway at the moment, there might be two other shows that are bigger than this. From the audience, it doesn’t seem as huge as it is, but actually, it's so large. We don’t even have a crossover in the back, we have to go downstairs.‍

Ayla: We don’t have minutes. I started counting this week, just for fun, how long my breaks were that I thought were actual breaks. I was playing on the phone, and I decided to check. It was like three, two and a half minutes the other day.

‍Holli: It’s so reflective of what being on the road with Ike and Tina Turner actually was like because they were on the Chitlin Circuit; [there’s] one scene where we have to sleep in a car—that was very realistic for them. They were doing shows back-to-back-to-back. Tina did shows right after she had a baby because I mean, there was really no break and a lot of times it seems like Tina is exhausted, but really everybody in the show is.‍

Do you have a favorite song that you like to perform?

Leandra: It’s dependent on the day. On a good day, I could knock out “Higher.”‍

Leandra: On a regular day, "Proud Mary" is always a staple.‍

Holli: If I have full energy, it’s going to be “Higher.” Now, back in the day before these knees got tired, “Megamix” (the show-stopping finale) used to really be it.‍

Do you have quick changes?

Ari: If you could see backstage, you would be like, “this is a show within the show.”‍

Ayla: And if you’re changing your wig, even if you’re not changing the wig, you’re taking the pins out to change it 5 minutes later. You’re always doing something when you walk off in Act One.‍

Holli: The quickest change we have is into “Higher” I think.

‍Leandra: Maybe we should time it tonight? It might be 2:30.‍

Holli: Well, it slows down because it’s all of us changing and half of the boys—the ones who play the band—are changing on our side as well.‍

Ayla: And we’re all trying to get a cup of water at the same water station, but you’re changing your wig.‍

Holli: I love a quick change, though, because when I have time to sit down, I think my work is done.‍

What do you think it is about the musical that gives it its staying power?

Ayla: I’ve had people come to it and just say it’s the best live performance they’ve seen.  It is Broadway, but it is also like you’re quite literally at a concert, and there’s something I think so nostalgic about it, but also current, it spans generations. For example, the boy I used to nanny came and saw it and loved it—don’t bring your kids that are too young, maybe [laughs.]—but also my grandma came. It’s just so big… I saw it for the first time a month ago, and once you get to that final number, it feels like you’re being like [makes a motion like being both mind-blown and physically blown back by the sheer force of energy radiating off the stage.‍

Holli: I wish that they could see the movement that you were doing!‍

Leandra: I call Tina the mighty roar of Broadway.‍

Leandra: There’s not a roar I’ve ever heard; this kind of audience, they just can’t help themselves but to holler. I think what will keep people coming back every time is the story of resilience. No matter what, even in the darkest times, you can still do it. I think that that is what brings people in. And then in the last 10 minutes, you get to scream your head off, you get the party.‍

Holli: They tell you to pull your phones out! You just want Tina to point at you in the front row. I think that, as well, it’s because the show is so inspirational and we as human beings, we are obsessed, we are so intrigued—typically, not everyone—but we’re so intrigued by celebrities’ lives and wanting to know their stories. I know I am. I don’t care how bad a movie is. If it’s a biopic, I’m watching it and I’m loving it. And so a lot of people I’ve heard come to see the show, have said they didn’t know all of this about Tina’s life. I mean, the whole second act is a story that has never been told. Everybody mostly knows about the movie, which is mostly just her life with Ike but Tina had a life before and after Ike. A lot of people don’t get to see that, so when you watch everything she’s been through and then you see how we can find joy in the dances and using performance to pull herself out of that darkness that she was in is just so inspirational and it’s so fun and and exciting and it’s a great time.‍

Leandra: It’s the Phoenix rising from the ashes.‍

Ari: As a person who is creative and feels, “When am I going to get my big break?”, you look at this story and think people didn’t really get a chance to know Tina until she got into her forties. So, it lets people know that it really doesn’t matter, whatever the world may tell you, you’re supposed to have this by 25, 35, 45, none of that matters. And she’s proved that even when society told her that she was too old to do something, she did it and made a bigger name for herself. I mean, she’s one of the artists that probably has one of the best concert sales of all time. If that doesn’t say something...

Do you have a favorite look from the show?

Ayla: The green dress and we have a classic ‘60s look.‍

Ari: For me, it might be the “Higher” dress or even “Proud Mary.”‍

Holli: Yeah, I think mine is the "Higher" dress… but it’s like a baby doll dress, it’s got this cute little bag and a little pocket. It’s really cute!‍

Leandra: I think also “Higher” has a sentimental essence. As original Broadway cast members, they made us all stand on stage and they cut [the dresses] all the same line as the shortest person, which at the moment was Destinee Rea, so for us who were taller, it was just butt, booty-cut length on us. So we had to learn how to accept that your junk, your whole body will shake, but how powerful we’ll feel if you dance in that dress. So it does kind of feel good; sometimes I feel like I earned the shortness on this dress.‍

Holli: At first, we were like, "we look like Big Bird" because they’re big, yellow, frilly dresses, and then they cut and we're like, "Oh, my gosh, my butt is out." And now we just feel fantastic.