THE MINUTES Arrives on Broadway Just in Time — Review 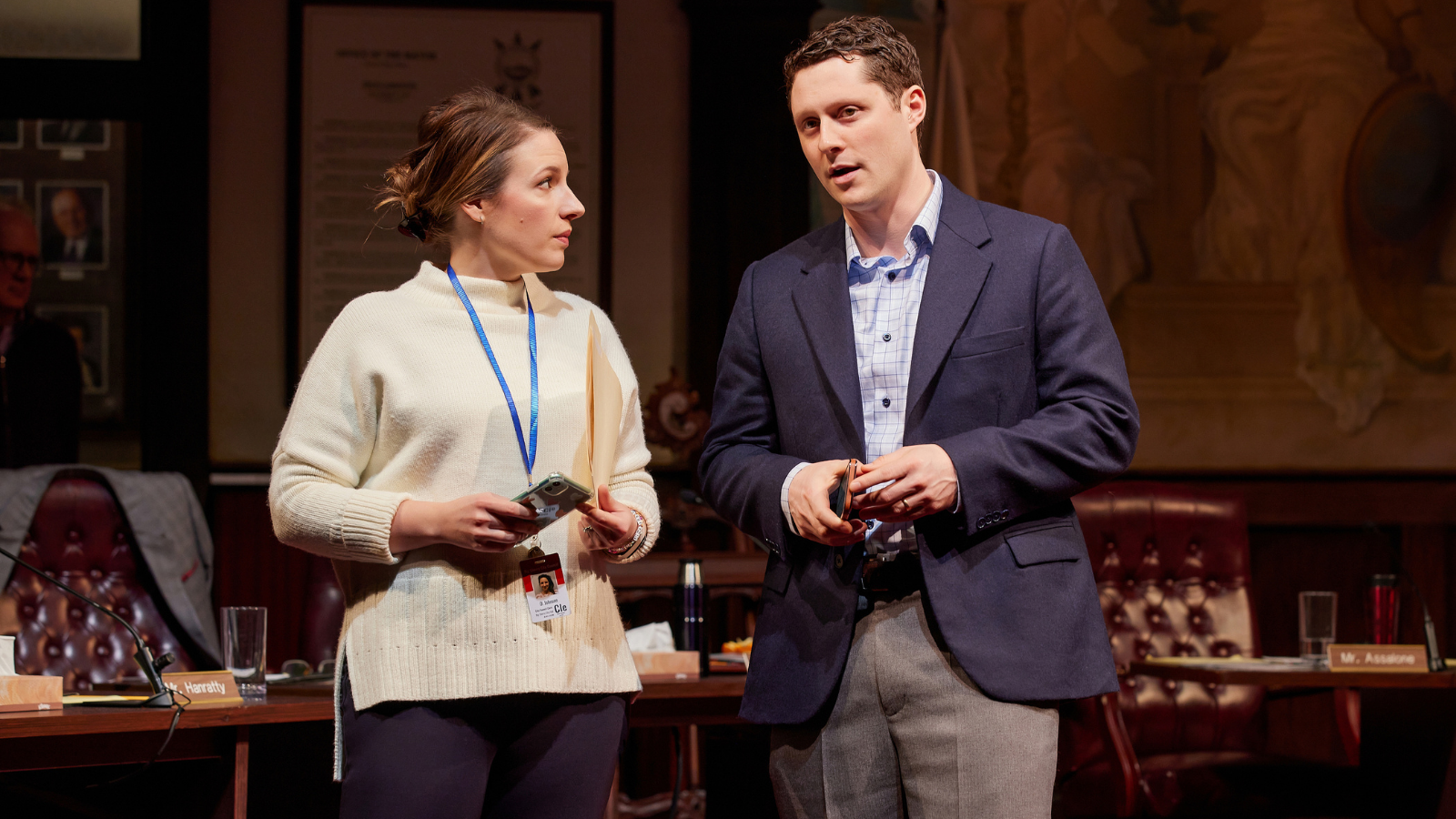 Welcome to Big Cherry, a fictional city located somewhere in this great nation of ours that is just trying to get by. Such is the setting of The Minutes, Tracy Letts’ latest play to hit the Main Stem in a brilliant production that opened earlier tonight at Studio 54.

This searing comedic drama had its world premiere in Chicago at the Steppenwolf Theatre in 2017 and was named a Pulitzer Prize finalist the following year. Now finally back on its feet here in New York, Letts has crafted an impressive political tale that will have you thinking long after leaving 54th street.

As the lights dim, we meet Mr. Peel (Noah Reid, in a marvelous Broadway debut) on a rainy November evening, where he has just returned for the latest City Council Meeting after missing last week’s due to his mother’s funeral. New to the Council, he attempts to keep his fresh-faced new kid attitude until it’s clear something went down at the previous meeting that no one will mention. The minutes, which are always dutifully prepared by city clerk Ms. Johnson (the always wonderful Jessie Mueller), are nowhere to be found. Council member Mr. Carp (the smart Ian Barford) is not present and things seem to not be adding up properly. Letts himself plays the aptly named Mayor Superba who runs the council and holds the power. In typical Letts fashion, he gives us a frightening yet loving portrayal of a man who so deeply loves his town and will protect it at all costs.

Along the way, we are introduced to the rest of the council which includes a gaggle of some of the the most hilarious working actors today, including Sally Murphy as the ditzy Ms. Matz, Danny McCarthy as the passionate Mr. Hanratty, and Austin Pendleton as the clueless Mr. Oldfield, to name a few. As the closed-to-the-public meeting continues, what begins as your standard workplace comedy slowly morphs into a sobering greed-filled thriller that makes for not-to-be-missed theatre.

Anna D. Shapiro shrewdly directs the uniformly perfect ensemble on David Zinn’s cavernously beautiful set. The council is sat at their desks for most of the play, so Letts’ language is perfectly on display in this masterpiece of tension-filled Americana. When you aren’t hilariously cracking up at the witty jokes and delicious direction, take some time to look at the detail of the desks and just what those items say about each member of the council, from colorful water bottles to 5 Hour Energy drinks. When you add in Ana Kuzmanic’s costumes, Brian MacDevitt’s lighting, and André Pluess’ sound design and original music, it makes this non-stop 90 minute whirlwind a true hit. One thing is clear, if there is one play you choose to see on Broadway this season, have it be The Minutes.

The Minutes is now in performance at Studio 54 on West 54th Street in New York City. For tickets and more information, visit here.