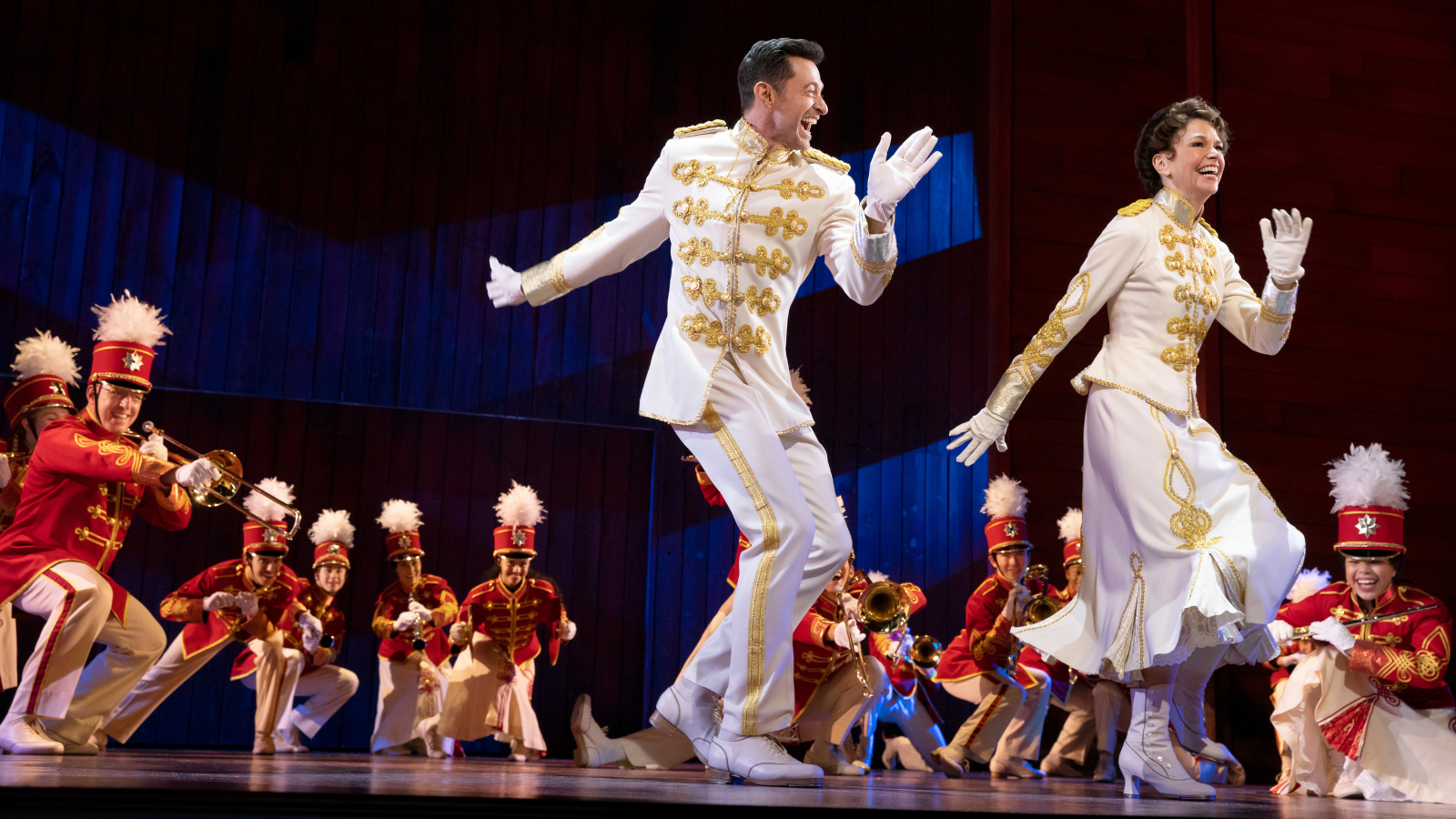 If there is one thing Hugh Jackman is going to do, it’s flash a million-dollar smile and win you over. A true song-and-dance man whose eagerness to please has long enamored audiences, he is almost impossibly perfect for the role of Harold Hill, an entrancing con man who descends upon 1912 River City, Iowa ready to sell its unsuspecting townspeople on dreams of a marching band glory and moral purity. Perfectly channeling his innate charisma into this all-American huckster, the Australian actor sets his eyes on a musical theatre prize and, unlike his character, wins it fair and square.

The word for his performance is ‘jaunty,’ and it is a trait not many leading men are either allowed to, or able to, display so delightfully. But Jackman excels, and does so handsomely. Often required to lead, not just the production, but the cast through many, many ensemble numbers, he is as believable a leader as they come. His stage presence is magnetic, with his confident voice and almost frighteningly on-point moves a perfect match for his leading lady.

If there is one thing Sutton Foster is going to do, it’s gleam a charming grin and win you over. That’s why, as Marian Paroo, the fussy librarian whose well-worn skepticism gives way to the possibility of love, Foster is not an obvious choice, but an inspired one nonetheless. She spends much of the first act fretting over her distaste for her town’s narrow-mindedness and their sudden hero’s sketchy background, but Foster’s unstoppable inner light makes her Marian one to root for, if only because we see what’s inside.

Many complain that Foster, whose sweet, reliable voice does not soar to the operatic heights of previous Marians like Barbara Cook and Rebecca Luker, is miscast. Her keys have been lowered, yes, but in a theatrical landscape where cookie-cutter sopranos dip in and out of Disney and Andrew Lloyd-Weber productions with the forgettable ease of an overheard whistle, Foster’s vocal personality turns the character into one of her signature, lovable dorks.

It’s a good thing these two leads radiate enough star wattage to power the gargantuan Winter Garden Theatre, where the second Broadway revival of Meredith Willson’s 1957 musical opened tonight, because the work itself is anything but electric. Though unfair to compare it to another classic which premiered seven years later, The Music Man scans today as a bargain bin Hello, Dolly!: a paean to the American hustle too enamored by its own size to land any worthwhile remarks about the highs and lows of that same scrappy optimism.

Co-authored by Franklin Lacey, the show’s first act is mostly to blame. Less a compelling invitation to a story than a collection of barbershop quartets and generic group numbers, it lets the plot’s witty setup wilt as its most interesting characters vanish into nonstop parades. This is where choreographer Warren Carlyle fails. Despite having previously mastered the art of ensemble-heavy productions, as in the recent Dolly revival, his work here is often slapdash and cluttered, leaving the sizable cast near-collision throughout most of the large set pieces. His work on the smaller dances, however rare in this pageant-heavy show, is frequently splendid and Jackman nails each beat. Quick-footed and with laser-sharp precision, he proves himself an old-school triple threat.

The second act, the one with actual scenes and dramatic stakes, is a vast improvement. This is in no small part due to Jackman and Foster sharing a series of lovely moments as their characters are drawn closer to each other’s polarities. The two have a warm, unforced chemistry, and their characters’ changes of heart are convincing and affecting. This is also when a rival traveling salesman arrives to kick the plot into motion, threatening to take down Hill’s goodwill.

And this is where director Jerry Zaks fails: though also an alum of the latest Dolly revival, the strength of these latter scenes lead to questions of why the material is being staged in the first place. A strong back-half does not a successful revival make, and with little contemporary intervention or nods to why this show would resonate today, the production largely fails to prove itself. Not that a Music Man heavy on Trump allusions is what anyone would have wanted—and I’m sure that pitfall is one into which thousands of productions have fallen since 2016—but the production, however entertaining, lacks a necessary backbone.

There is still enough sizzle to fire up admiration for it, especially in Santo Loquasto’s gorgeous costumes and scenic designs. Yet another graduate of the Dolly revival—to say it looms large over the production would be a deceit not even Harold Hill could pull off—his backdrops lift directly from Grant Wood, another famous Iowan whose paintings of rural Americana are etched into the national consciousness.

The supporting cast is uniformly excellent, with Marie Mullen a great companion to Foster as her mother, Mrs. Paroo, and Shuler Hensley earning honest laughs as an old partner in crime of Hill’s. Jefferson Mays is, as always, comedy gold as the dim-witted Mayor Shinn and, as his wife, Jayne Houdyshell brings down the house with the most exact of gestures, as only Jane Houdyshell can. The large, large ensemble is agile, athletic, and committed to the dance-heavy material, and believably presents a tight-knit community.

That might not come as such a surprise, given how long the pandemic-delayed production spent in rehearsal, and then in previews. Everything onstage is pure Broadway gold, fine-tuned to the gods and played to the back of the house. If only an enterprising huckster with ambitions greater than his reach had waltzed backstage, to whip the auto-piloting creative team into a frenzy, perhaps this revival would have been worth all that trouble in River City.

The Music Man is in performance at the Winter Garden Theatre on Broadway in New York City. For tickets and more information, visit here.

Editor's Note: An earlier version of this review stated that Jerry Zaks directed Anything Goes with Sutton Foster. He directed the 1987 revival starring Patti Lupone.