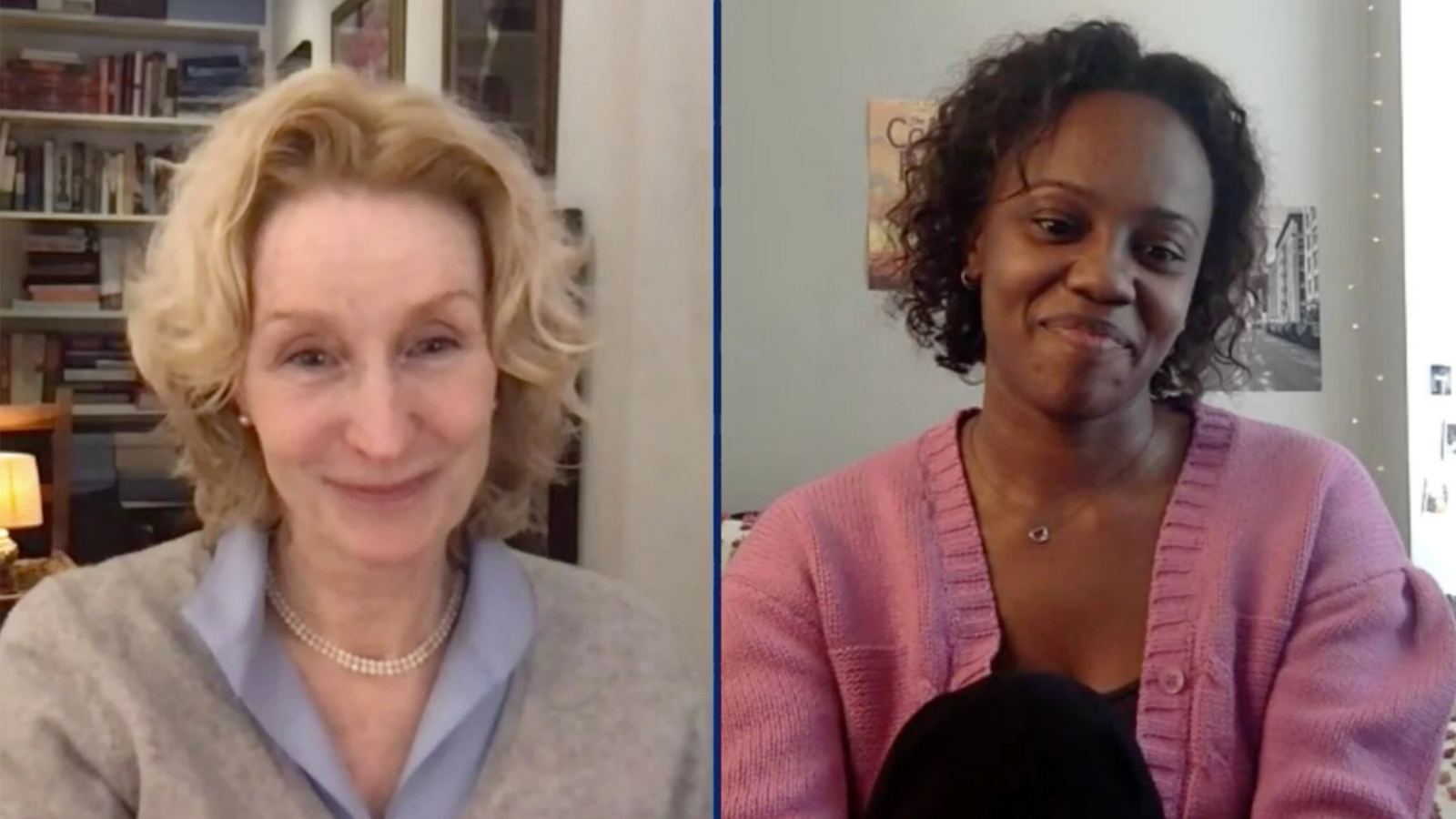 The Niceties, Eleanor Burgess’s play about the explosive fallout between a white American History professor and one of her Black students, premiered at Boston’s Huntington Theatre Company in 2018. Now, the Huntington has partnered with the Manhattan Theatre Club (MTC)—which staged the same production later that year—to produce a free, online adaptation.

Once again starring Lisa Banes and Jordan Boatman, and directed by Kimberly Senior, the play takes on an even sharper resonance in 2021. The battle of the wits was originally meant to take place at Professor Janine Bosko’s (Banes) office, where Zoe (Boatman) debates the merits of her thesis that a successful American Revolution was only possible because of slavery. In this version, the arguing happens over Skype—the action takes place in 2016, hence the noticeable lack of Zoom.

I spoke with Burgess, who said she hadn’t planned to revisit the material, about what has changed, and what hasn’t, in the play’s style and content.

“Kimberly said she’d only be interested in doing this if we embraced the virtual nature of the production,” Burgess said on a recent phone call. “As for the actual political content, I didn’t make many changes at all.”

The increasingly hostile interactions between the confident student activist and the professor who is set in her ways take place right before the 2016 election, when Obama-era “post-racial” thinking was still common.

“I didn't want to pretend I knew things that I didn't when I first wrote it,” she said. “I wanted to keep an element of timelessness in it; it's about America and what we are as a country, and I wanted to preserve that.”

Leaving the political discourse mostly intact allowed the playwright to engage with the work’s new form.

“Most of the edits were about embracing this virtual experience and this very new type of awkwardness,” Burgess noted. “There's this wonderful awkwardness online of two different generations interacting with the technology, and the ways you experience a person's discomfort through a computer screen.”

The play was first developed at the Contemporary American Theater Festival in 2017, and much of the same cast and crew have followed the work through its subsequent productions. Burgess quipped that they “knew this play in their bones” by the time this version was produced.

“Kimberly used to make fun of me in our live productions because I would say, “If I were directing this they'd never get out of their chairs,” which, of course you can't do in live theater,” she added. “I sort of won, in the end.”

Burgess agreed that a Skype staging, without much movement outside of the actors’ faces, further highlights the writing.

“It’s a very writerly impulse to want to have them just sit and say things, and have that be the story,” she said. “To some degree, this production puts the emphasis on the language, though I think it was always a very language-driven play. Both the characters are such intellectuals, so to challenge their ideas is to challenge them. If you say their understanding of America is wrong, it’s a personal attack for these people whose identities are so wrapped up in their own ideas.”

Burgess, who studied history at Yale College, said she started asking herself questions about the way the subject is taught after graduation.

“One of the things that was always a challenge was that they're not extremely emotional people, but very intellectual,” she explained. “Everything, as they're processing it, is a tiny hit; they don't get big reactions for a long time. Suddenly, we can see every little thing hitting their faces. I would never have thought of it as a very cinematic play, but it's interesting how much closeups turn out to serve the play and help track how emotional these abstract ideas are to them.”

The playwright mentioned that a major change to the work is the addition of Zoe’s bedroom, which she said deeply affects the power balance between the two women.

“It's a bit infantilizing to Skype a professor from your childhood bedroom, and I think to some degree it allows her to be a little less armored,” she said. “In the physical production, we talked about her coming in prepared for battle with a more formal outfit. Now, she kind of embraces the vulnerability of, ‘I'm going to let you see that I'm not doing well.’”

“When people are arguing about a political topic, we often don't let them just be people,” she continued. “Neither of these women are perfect, and I think that getting to see their homes sort of emphasizes who they are and their understanding of the world. That vulnerability is really exciting.”‍

The Niceties is available to stream for free from the Huntington Theatre Company and the Manhattan Theatre Club through June 13.