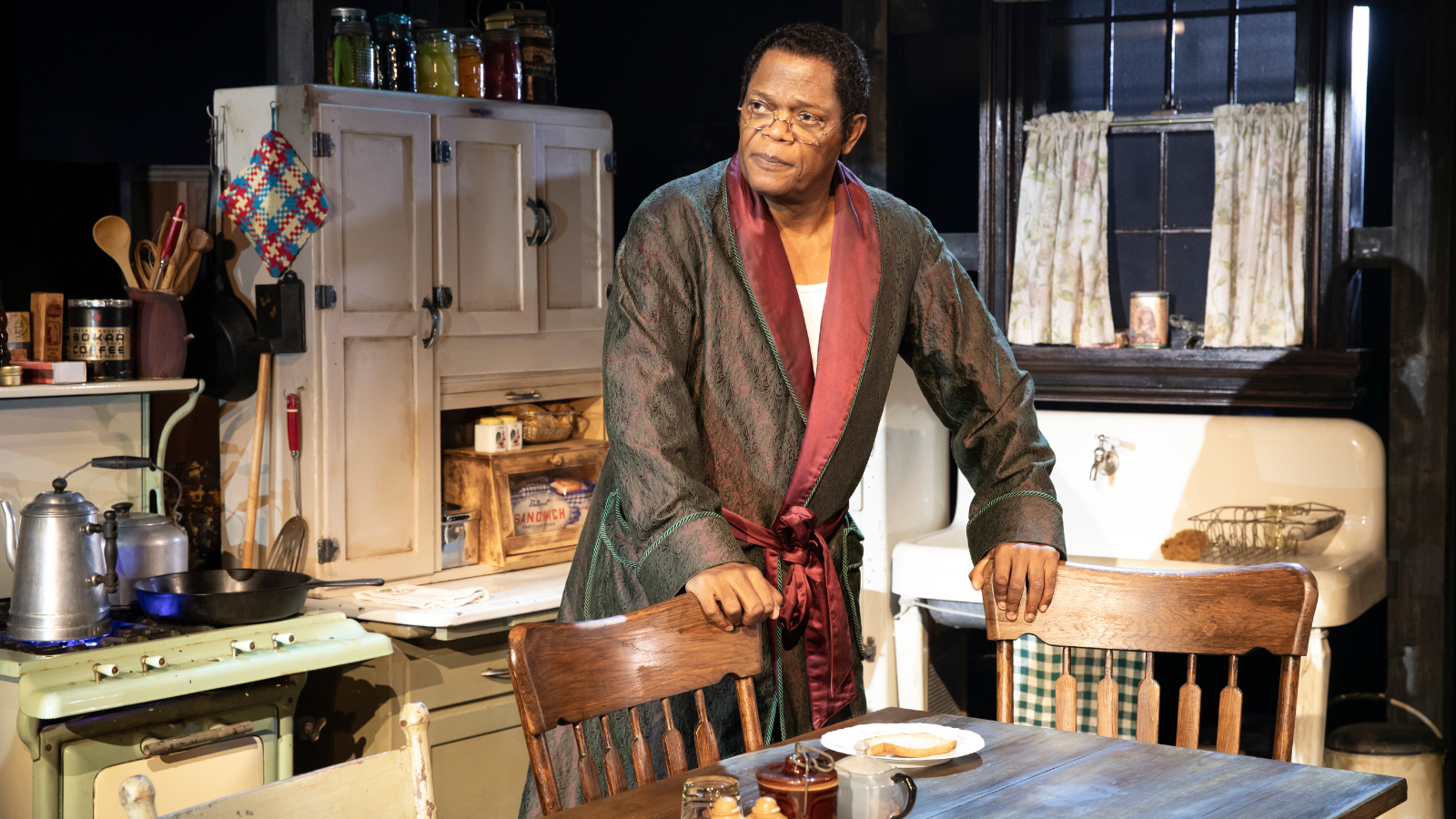 What do we do with our family histories if they no longer serve us? Are they a burden or a legacy? August Wilson sought to tackle these impossible quandaries in The Piano Lesson, the fourth play of his decades-spanning Pittsburgh Cycle. Directed by LaTanya Richardson Jackson in its first Broadway revival since it premiered in the late ‘80s and took home the 1990 Pulitzer, it reaches them satisfactorily enough without quite reaching their haunting potential.

To lay out the story is to see exactly why a committee based on reading a stage work, such as the Pulitzer, would become enraptured by its tightly-woven themes: A few years after the Great Depression, Berniece (here played by Danielle Brooks) lives in a dark, wooden house in the North with her tween daughter Maretha (Nadia Daniel at the performance I saw), and older brother Doaker (Samuel L. Jackson), who’s worked on the railroad for 37 years. In comes their hotheaded younger brother Boy Willie (John David Washington), who means to sell their family’s intricately carved piano—an heirloom crafted by an enslaved ancestor and passed down through generations—so he can buy the land previously owned by their family’s enslaver, an idea Berniece, and some lingering ghosts in the house, vehemently oppose.

The leads are as starry and capable as they come, and full of neat trivia: the Jacksons are married; Samuel originated the role of Boy Willie in the play’s premiere at Yale Rep; and Washington is the rising-star son of Denzel, whose mission to bring Wilson’s work to the screen included casting Michael Potts (more on him later) in the film adaptation of Ma Rainey’s Black Bottom he produced two years ago.

But whether due to Wilson’s often one-note characterizations or Richardson Jackson’s deferential direction, the “stars” often fall to the background. Jackson (as is his character) is magisterial as always, though complacent in friendly grandfather mode; Washington more than holds his own in his stage debut, and shines whenever onstsage as dumb ambition incarnate, with a rambling, start-stop monologue for the ages, but evaporates whenever offstage; and Brooks, a fine actress capable of generating tremendous empathy and power, is too often stuck exasperated, near-tears and with little resolve.

It’s not entirely their fault—this is far from Wilson’s most dynamically composed, or tightly-constructed, play and its three leads, unless boldly reimagined, easily fall into the same familial patterns with each other, leaving vast room for outsiders to leave more immediate impressions. In that department, this production counts upon an embarrassment of riches.

Ray Fisher comes through as a stealth MVP, playing Boy Willie’s dim-witted sidekick Lymon. Fisher understands the universal imperative that all anyone ever wanted was a tall, handsome man, slightly dumb but naturally kind. A scene left alone with Brooks shows what the production could’ve been, had it leaned into one-on-one relations all the way instead of merely dipping into archetypes. April Matthis and Trai Byers are very fun as a would-be preacher and a good-time gal, respectively, both mixing horniness and passes at respectability to great comic effect. But this winds up being Michael Potts’ show, despite what his role as the family drunkle Wining Boy might try to lock him into. A rowdy jumble of amiability, liquor, and exhaustion, it’s impossible to take your eyes off him, or wonder what he’s doing whenever not around.

Who is and isn’t in the house is another matter, with Wilson’s intimation of ghosts protective over the piano, and thus, the family’s history, becoming a messy element for the production. Jeff Sugg’s projections and Scott Lehrer’s sound design will spring some spooky details every now and then, which Alvin Hough Jr’s exquisite music, somewhere between ragtime and a Boris Karloff horror score, fruitfully evokes. But Hough’s terrific work far, far surpasses the production’s attempted ghostliness, and the reminders that this can be, ostensibly, a ghost story, are few and far between. When they come, they feel almost like jokes. Beowulf Boritt’s set, a haunting skeleton of a house, deserves better.

Despite the haunted house theatrics of the production, which I genuinely disliked, I am nitpicking—as one does when handed material of this quality, delivered by artists of this caliber. This is a first-rate production, with a luminous cast worth its weight in gold. It’s not in the craftsmanship, but in the assembly, that the piece fails to live up to the finely carved materials that, like its namesake instrument, can truly make this work sing.

The Piano Lesson is in performance through January 15, 2023 at the Ethel Barrymore Theatre on West 47th Street in New York City. For tickets and more information, visit here.