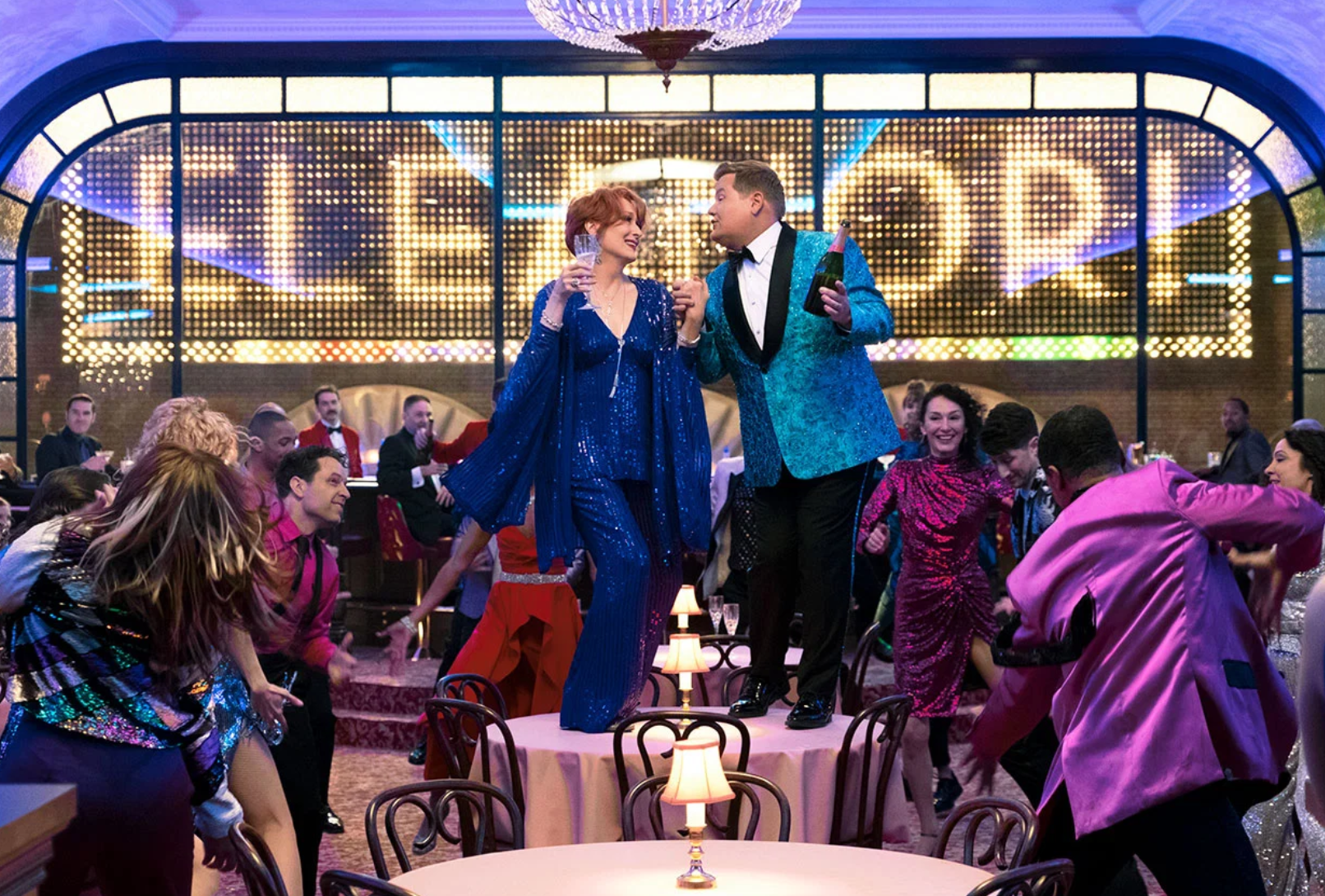 For many this past year, prom was cancelled out of an abundance of caution due to the global pandemic we are living through. In Ryan Murphy’s The Prom, a new film out on Netflix December 11, a local prom in Edgewater, Indiana, is put on hold for an entirely different reason.

The story follows four Broadway stars looking to revamp their image after a disastrous review in The New York Times calls them out as braggarts and closes their show on opening night. They take to Twitter to find a “cause célèbre” and land on Emma, a young lesbian who simply wants to take her girlfriend to prom despite the PTA's refusal. As the “Liberals from Broadway” ascend on small town Indiana, they learn that being “culture disruptors” might make their unruly hearts grow.

Meryl Streep leads the superstar cast as vain diva Dee Dee Allen. In what seems to be an almost perfect role for her, Streep deliciously delivers a lovable narcissist whose rendition of “The Lady’s Improving” would warrant a standing ovation eight times a week on Broadway. Her partner-in-crime is the equally obsessive egotist Barry Glickman (James Corden). Corden’s portrayal of a middle aged gay star at times comes off as stereotypically insensitive, but he finds the balance as Barry reconnects with family members of his past. Nicole Kidman, as chorus girl Angie Dickenson, is a blast and only further proves that she must return to more singing roles. Andrew Rannells plays down-on-his-luck Broadway actor and 90s sitcom star Trent Oliver, and gives us one of the best performances of the film. His musical ability and talent shine brighter than ever.

Jo Ellen Pellman makes a lovely film debut as Emma and, unlike her character, feels right at home with the megawatt cast that surrounds her. Broadway’s Ariana DeBose, of Hamilton fame, is a perfect Alyssa Greene, Emma’s still-in-the-closet girlfriend. DeBose is next set to star as Anita in Steven Spielberg’s much anticipated West Side Story remake. Kerry Washington plays Alyssa’s mom and school PTA president whose internalized homophobic tendencies are unfortunately still very prevalent in many parts of our country. At one point she mutters, “This isn’t America, this is Indiana,” which pretty much sums up this town.

The musical premiered at the Alliance Theatre in Atlanta four years ago, before moving to Broadway in the fall of 2018. So how is the transition from stage to screen? Much closer than I ever would have imagined. Murphy stays extremely true to the Broadway production, keeping the original librettists Chad Beguelin and Bob Martin as screenwriters. Under Murphy’s direction, we get to dive even deeper into the characters than what we saw on stage which only improves their stories. The terrific score, by Beguelin and Matthew Sklar, soars to new heights thanks to lead orchestrator Erik Arvinder. Casey Nicholaw has kept much of his original Broadway choreography intact for the film, and it translates beautifully to the screen.

The Prom follows behind other Murphy theatrically-based films: an adaptation of Larry Kramer’s The Normal Heart premiered in 2014, and more recently The Boys In The Band which was released this past September on Netflix. In condensing what was written in two acts for the stage, the pacing at times feels rushed and not all redemptions seem to be fully earned.

In terms of adaptations, Murphy and team turned this around quite quickly over the past two years. The first time he saw it at the Longacre Theatre on Broadway, he walked out knowing he had to get his hands on the material. Principal photography began within months, but was halted in early March along with the rest of the industry due to safety concerns regarding COVID-19. Production resumed and finished earlier this summer.  ‍

The Prom is Murphy’s love letter to Broadway and musical theatre lovers everywhere. He delivers a wonderful, and at times heart wrenching, tale of acceptance and love. As an incredibly hard year comes to a close, sometimes Meryl Streep belting out a show tune is exactly what you need to cheer you up. So grab the corsage and get ready to give it some zazz. ‍