THEATRE FOR ONE: HERE IS FUTURE Is What We Need Right Now — Review 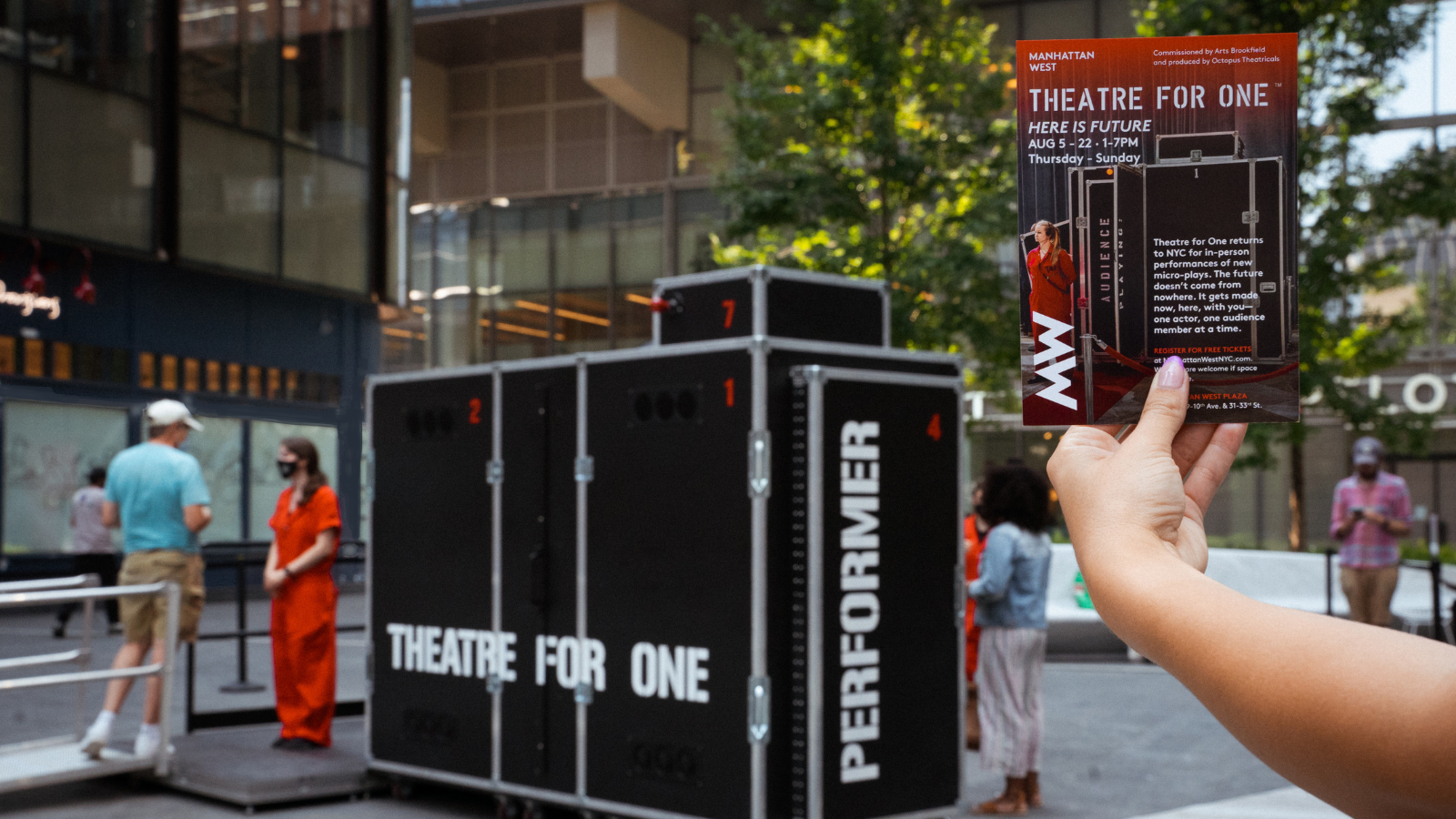 Theatre for One at Manhattan West | Photo: Ryan Muir, Courtesy of Arts Brookfield
By
Noah Pattillo
No items found.
on
Category:
Reviews

I had not seen a micro-play before this afternoon, but let me tell you, after experiencing the sextet of micro-plays at Theatre for One: Here is Future I can confidently say I’m a micro-play stan. All six of these teeny plays occured in a black booth. It looked like a large version of one of those lighting trunks you see when shows are loading in or out. A sign of the ephemeralism of theatre. The staff instructed me to scan a QR code where I read a program note from the creators of Here is Future. The program explained how one side of this large box said PERFORMER and the other said AUDIENCER. Christine Jone, the creator and artistic director of Theatre for One explains that the ‘R’ is added to the word ‘audience’ because audience members play an active role in the intimate scenes that make up Here is Future. Shortly after finishing the note, it was my turn to enter the box. All 6 micro-plays are worth seeing, but for the sake of brevity, I will discuss the two I enjoyed the most.

The first micro-play I’ll talk about is Turtle Turtle and That Which We Keep Telling Ourselves is Over Now by Lydia R. Diamond. From the first sentence, I knew it was a Diamond play. Ms. Diamond has such a vivid style. It’s conversational, warm, sharp and political. Gillian Glasco played a recently divorced woman who decides to get her child a turtle. She goes on and on about the tribulations this turtle has brought into her life. She thought it would be a fun pandemic distraction but that it turned into a time-consuming nightmare. After so much drama with the turtle, she is determined to keep this turtle alive. About half-way through this short piece, I noticed a band aid on the character's finger. Shortly after noticing this, the character detailed how the turtle had bitten a chunk of her finger off. Throughout the performance, I was unsure of my relationship to the character I was sitting across from. Then, I received an apology, the character was sorry she kept talking about her daughter’s turtle on our first date. Without a moment to digest this information, the screen shut. The micro-play was over. Ms. Glasco’s vibrant performance as this character captivated me with every word. I waited on the edge of my seat eager to hear what happened next in the tail of the turtle.

Something I noted throughout the entire afternoon was the inspiring level of work demonstrated by directors Tiffany Nichole Greene for Turtle Turtle…and Gravita 4 Para 0, Rebecca Martínes for The Curse and The Golda Project, Regina Taylor for The Transformed Returns, and SRĐA for the love vibration. With just 5 or so minutes, every single detail mattered, the chair the character would sit in, the props they were surrounded by, the clothes they would wear, these excellent directors took all of that into account and harnessed their skills to tell vivid stories with very little. A directing choice I really loved was the start of The Golda Project by DeLanna Studi. The piece started with the character across from me standing up extremely close to the barrier between us. The relationship between us was instantly defined by this choice and it really encapsulated how intricate each literal second of these pieces was conceived. Another moment I loved was in Gravita 4 Para 0 by Stacey Rose. As the door was being closed by the usher/technician, I was told to turn my chair only 90 degrees, so that my legs were parallel to the screen dividing me and the performer. The screen opened and we were in a waiting room. This change in the way I was seated created a detailed relationship between me and the character next to me and it made the play that much more visceral.

The next micro-play I’d like to highlight is The Transformed Returns by Regina Taylor. Here, an elderly woman talks of how she fled New York City for her hometown in Texas, the week of the shutdown. She tells me that having space for a garden has allowed her to connect to her mother and father, who have passed on and how technologies like Zoom and FaceTime have allowed her to connect with friends across the world. She worries that her 2 year old granddaughter may not recognize her when they finally see each other face-to-face again. She vents her frustrations over her daughter not getting vaccinated, the only one of her children not to do so. Her daughter is worried the vaccine will make her sterile. Just like the shots the US government administered to Black and Brown folks in the 50’s to sterilize them. But still, the woman before me, played with a moving tenderness by Lizan Mitchell, tells me that despite all this she is still elated to see her grandbaby and squeeze her cheeks. This touching play moved me the most. I found myself thinking of my grandparents, whom I recently was able to visit on a short trip home and how difficult it had been to go a whole year without being able to hug them. One thing that really made this piece stand out was the introduction of different characters. Lizan Mitchell played the older woman, but she also played her parents and her daughter. It was the only one of the micro-plays when the performer played several different characters. There was also beautiful sound design by Bill Toles, who created eerie effects by adding reverberation to some of the performers lines.

Throughout the afternoon, the sound design by Toles and Josh Higgason helped elevate the micro-plays. Another moment I really loved was during Gravita 4 Para 0. After I had rotated my chair, I heard cable news stations interviewing people about vaccine hesitancy. This underscored the entire piece and added an extra layer to the scene that made it that much more palpable. I also loved the sounds of the outside during the love vibration. It really provided an appropriate mood to the piece.

The two micro-plays I’ve detailed are just the tiniest peek into an absolutely captivating afternoon of theatre. I could write pages and pages on how much I enjoyed each and every one of these micro-plays, but I believe experiencing one, two, or all on your own will do more justice than my words on them. Live theatre has officially returned to New York City and Theatre for One: Here is Future incorporates the two aspects of live theatre I enjoy most: profound connection and poignant storytelling.

“Theatre For One: Here Is Future” plays at Brookfield Properties’ Manhattan West Plaza through August 22. For more information, visit here.