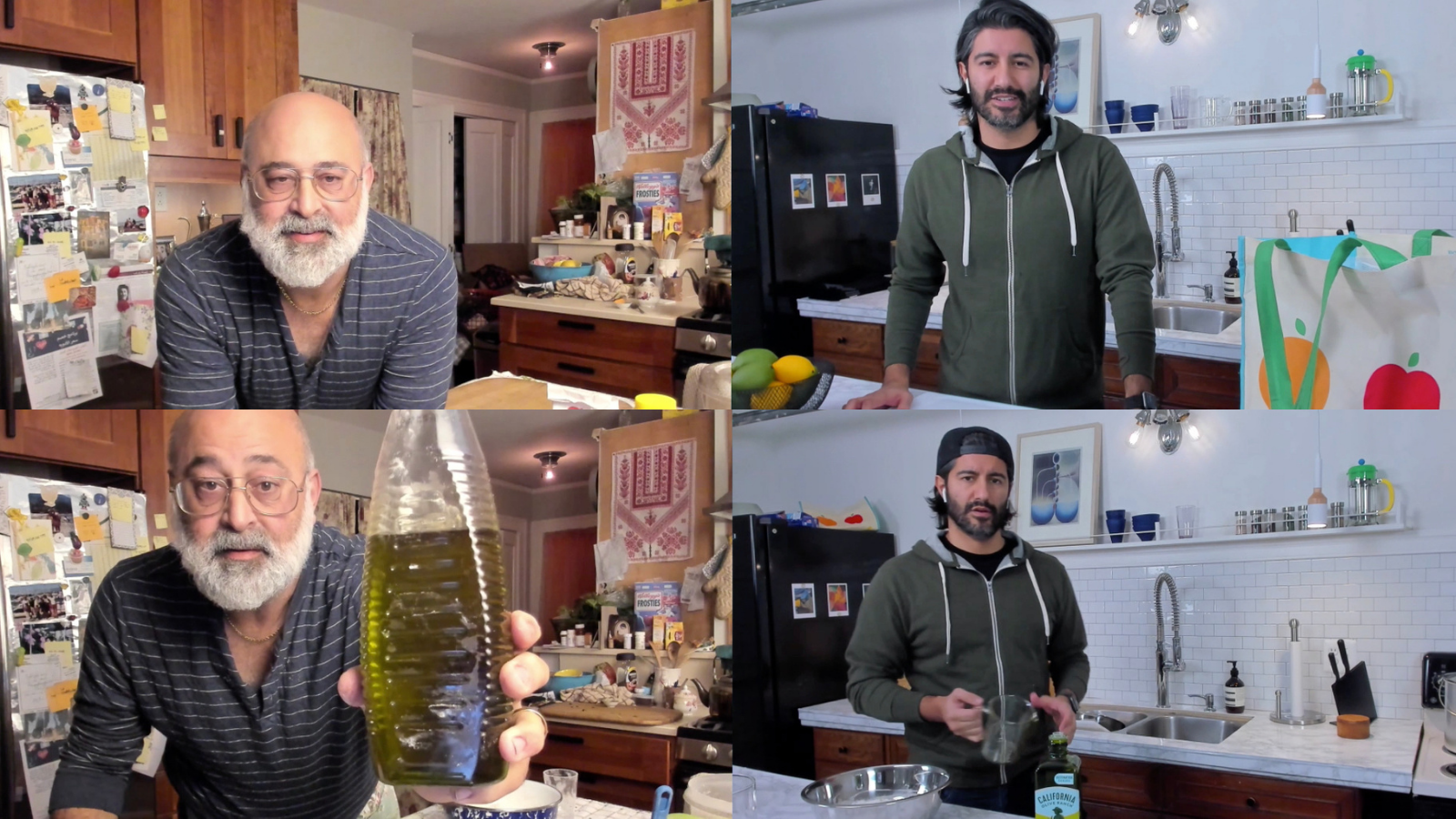 An estranged father and son log into Zoom, their kitchens full of ingredients. The father is calling from Ramallah, the son from New York City. “You need me and I need you to retrace this recipe so we can make it like she used to,” says the father. And so begins Amir Nizar Zuabi’s This Is Who I Am.

The play, commissioned specifically for a digital platform, is the latest offering from PlayCo and Woolly Mammoth Theatre Company, in association with American Repertory Theater, Guthrie Theater, and Oregon Shakespeare Festival. With a lineup of major producers like this, I was eager to see a new interpretation of virtual performance.

Performed live from the two actors’ kitchens, This Is Who I Am is a moving, meditative study of a father and son reconnecting after experiencing intense grief. The play, directed by Evren Odcikin, effectively utilizes its digital medium to contrast the distance and closeness between the characters. While the actors perform side by side, they are miles apart physically and emotionally. The only thing connecting them is a recipe for Fteer.

For those unfamiliar with Fteer, it can be described as a hand pie filled with spinach, onions, sumac, among other ingredients. In the play, Fteer is a family staple that was expertly cooked by the now deceased mother and wife of the characters. Per the father’s request, the son and father will make the dish on Zoom together as a memorial.

The act of cooking is an incredibly clever structure for This Is Who I Am. At first, it provides the father and son, played by Ramsey Faragallah and Yousof Sultani respectively, a mutual starting point. They quickly brush past their stilted introductions to focus on the recipe, which cracks open the door to understanding the characters’ complex relationship

The way each character prepares the Fteer is also telling. The son uses a lemon juicer, the father uses his hands. The father adds more than a pinch of salt, prompting the son to comment on blood pressure (and the father’s medical bills the son pays).  A great moment is when the father scoffs at the son’s salad spinner and dries his spinach by waving it in a towel over his head, spraying water all over the kitchen. He comments something about this is how they do it in Palestine and both laugh. In reality, the father resents his son’s life in New York City.

As laughs turn into sly comments and then into shouting, cooking is used as a way to squash the conversation. When the father confronts the son about abandoning his mother when she was ill, the son yells that he just wants to put the Fteer in the oven and end the call. I, on the other hand, desperately wanted the recipe to have ten more steps to give the characters time to work things out. However, the kitchen timer continued to tick.

Faragallah and Sultani both give wonderful, naturalistic performances. Their delicate relationship feels lived-in, and I especially enjoyed the occasional light humor both bring to their roles. There are times when the confrontations feel a bit too dramatic. While I think they could work on stage, I found it hard to believe one of the characters wouldn’t just end the call. Fortunately, there is enough pressure from the cooking to keep things on track.

It is of note that Zuabi’s play does not reference the pandemic nor suggest this conversation is only happening virtually because of 2020. These estranged characters, separated by thousands of miles, would be Zooming regardless of global events. I greatly appreciated this moment of escapism, something I have especially been missing from virtual performances.

At the conclusion of the play, the characters eat on camera and come to terms with the ways they have treated one another. I received a recipe for the dish with my ticket and wished I had cooked along with them during the play. I think tasting and smelling the same food as the characters would land This Is Who I Am’s final moments even better.

Fortunately, I felt full from the play alone.

“This Is Who I Am” plays through January 3, 2021. Tickets are available online at woollymammoth.net