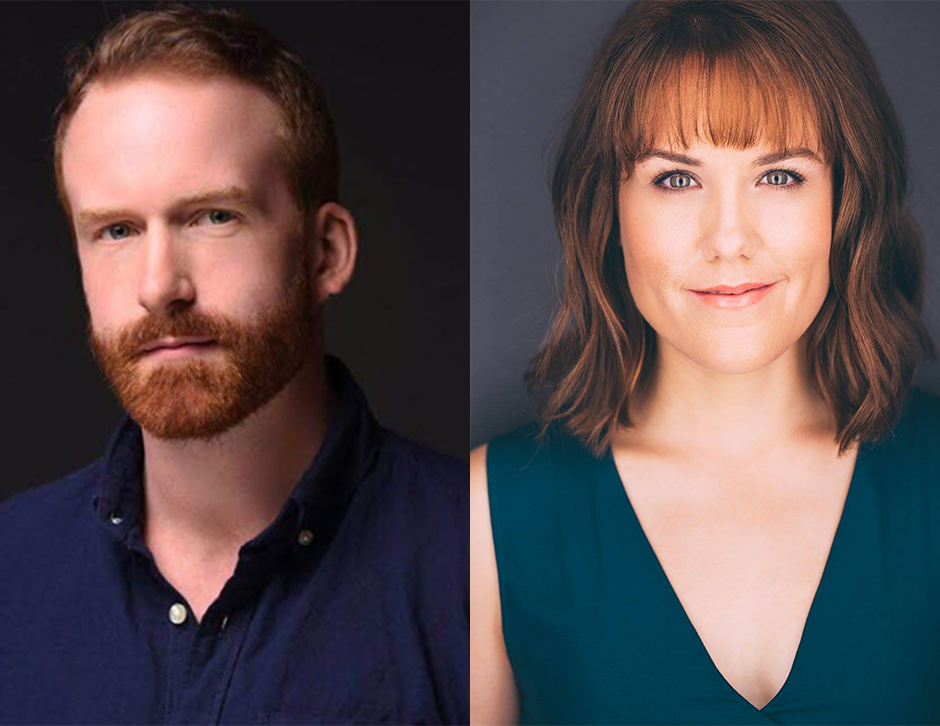 As much of the world abruptly came to a halt in March due to the ongoing pandemic, so did Franklin Performing Arts Company’s production of Legally Blonde the Musical. Broadway besties Emily Koch and Jim Hogan were only able to perform the iconic 2007 musical for one night before the theatre was forced to shutter the production, but the two are back at FPAC this week for THE BLACK BOX sings...WICKED, a new intimate and socially distanced concert. I spoke with Emily and Jim via Zoom during a break from rehearsals earlier this week to catch up with the two of them, who each have had exciting summers as COVID-19 continues to wreak havoc.

Emily Koch (Wicked, Waitress) recently finished up a run in Berkshire Theatre Group’s Godspell (our review here) just this past weekend. This production, of course, was the first and only Actors Equity approved musical in the country this summer. Donning a purple Godspell mask and denim “Bless The Lord” jean jacket, she told me about her experience. “It was just so wonderful. The people and the theatre were great, and no one got sick which was the biggest thing!” Composer Stephen Schwartz visited the production for its final performance, where Emily was able to reconnect with him after previously collaborating on Wicked, where she played Elphaba. Can we talk about her "Defying Gravity" riffs?!

All eyes from the theatre community were on the production of Godspell, as it was the first to open—the guinea pig if you may—and I wondered if the cast and crew felt that pressure. “There was so much to worry about, that you almost couldn’t. I was keenly aware that there was a lot riding on this, but at the same time I tried to think of it as a ‘lowkey summer production of Godspell.’ It was fun and joyus nevertheless.”

If you are anything like the 100 million currently active TikTok users in the United States, odds are you have have seen Jim Hogan in at least one video. Hogan (Waitress, Phantom of the Opera, Spring Awakening) skyrocketed to viral success when he and two friends posted an a capella cover of "Into The Unknown" from Frozen 2 to social media this past January. When the one minute video received over one million views and over 100,000 followers in just 24 hours, they knew they had something special.

Since then, the trio, now known as the “TikTok Tenors,” or T.3, are TikTok stars with covers of Broadway and Pop songs coming out about once a week. “I met Liam Fennecken back in 2010, when we were both students at Penn State University. We were both in Hyannis Sound, which is a group located down in Cape Cod, and Brendan Jacob Smith, who is the third, was also in the group a few years later.” It was Brendan who slid into Hogan and Fennecken’s Facebook messages to ask if they wanted to do a cover together, and the rest is history.

Koch and Hogan became fast friends, and now roommates, when they met on the national tour of Waitress. “I don’t think I had that kind of experience in professional theatre before. Everyday we’d start “What’s Inside” and it would be a non stop thrill ride for two and a half hours,” said Hogan. They both understudied principal characters on the tour and were able to play opposite each other in various pairings.

It is a homecoming of sorts to return to FPAC, where it has been six months since their production of Waitress had to come to a close. Koch is excited to dig back into her Elphaba roots for this Wicked-inspired concert. Along with Hogan, the pair will also be joined by Ali Funkhouser, Nick Paone, Katie Gray, Hallie Wetzell, and Tim Ayres-Kerr.

When not performing or creating viral TikToks, Emily and Jim have been binging the newest documentaries on Netflix “and wine, we love wine,” joked Hogan.