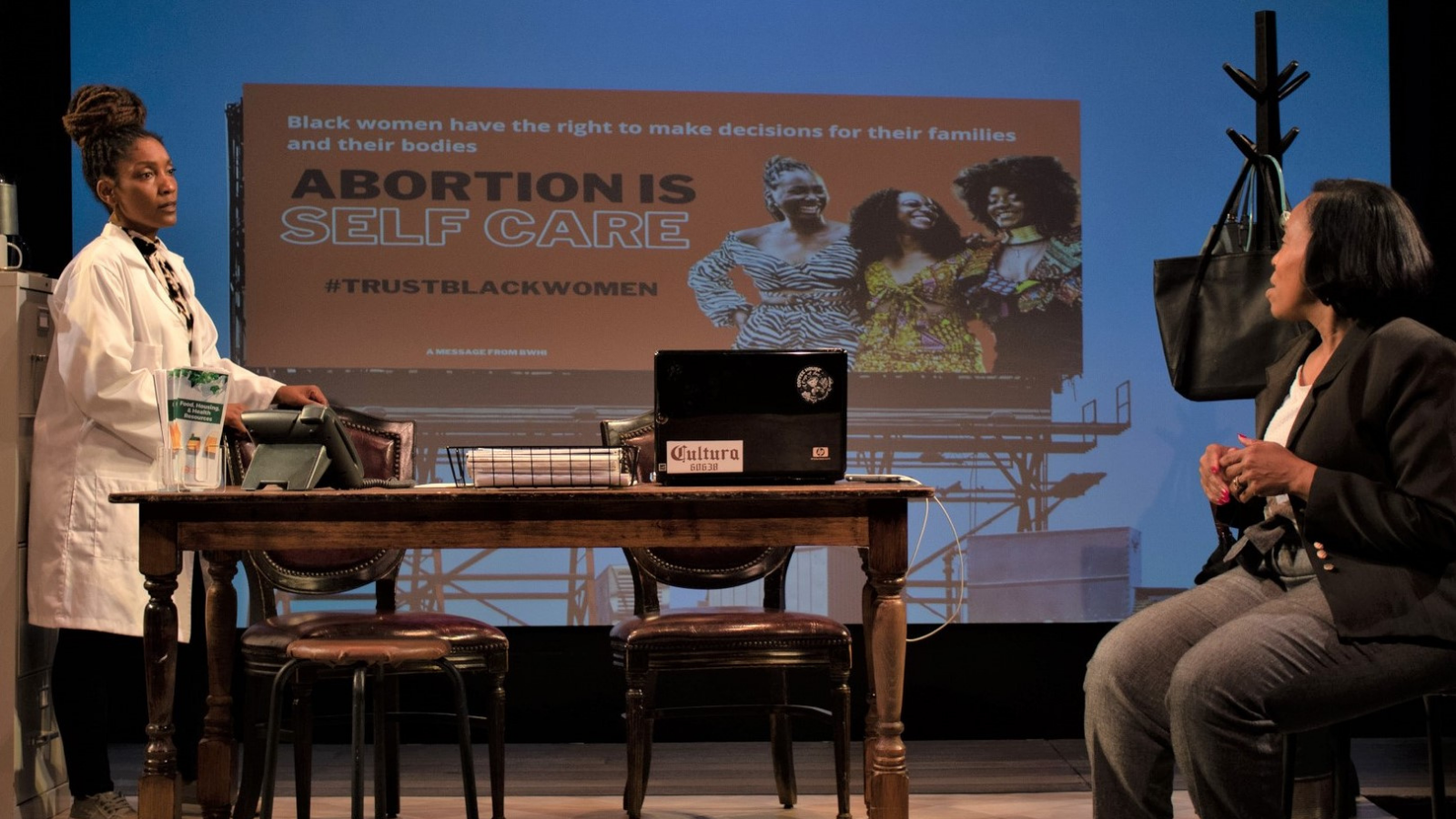 There’s no crystal ball to predict what will change in the political or social landscape before a fully staged production lands in front of audiences, which is often years after a playwright begins writing. In the case of Natalie Y. Moore’s The Billboard, the world premiere from 16th Street Theater arrives in Chicago with uncanny timing. This play about abortion opened six days after the U.S. Supreme Court overturned Roe v. Wade, reversing a nearly 50-year precedent that guaranteed the constitutional right to an abortion.

Set in Englewood, the real majority-Black neighborhood on Chicago’s south side, The Billboard centers around the Black Women’s Health Initiative (BWHI), a fictional not-for-profit clinic offering comprehensive health services. The action begins when Demetrius Drew (Frederick Williams), a Black man running for city council, puts up a controversial billboard with a photo of a Black baby and the caption, “Abortion is genocide.”

The founder and director of BWHI, Dr. Tanya Gray (LaQuis Harkins), claps back with a billboard on behalf of the clinic that declares, “Abortion is self care,” with the hashtag #trustblackwomen. This battle of the billboards—based on a real-life incident in Dallas, Texas—sparks viral social media posts and heated debates in the city council race. Ultimately, the backlash to BWHI’s billboard threatens the clinic’s funding from the municipal government.

The play explores the intersection of race and gender in the abortion debate, acknowledging the dark history of eugenics in the U.S., the racism and misogyny that rear their ugly heads on both sides of the issue, and the outsized political influence of white evangelical Christians. Abortion also serves as an entry point to examine many challenges facing Englewood: healthcare access, food insecurity, lack of jobs, population decline, and threats of gentrification.

In her thorough knowledge of local issues, the playwright’s journalistic background shines. Moore is a longtime reporter for WBEZ, Chicago’s NPR news station, and author of the award-winning book, The South Side: A Portrait of Chicago and American Segregation. Through the voices of her characters, she presents a range of viewpoints, allowing each to have their say, although it’s clear that Dr. Gray and her colleagues at BWHI are intended to be sympathetic protagonists.

‍The Billboard leaves something to be desired in the areas of character development and dramatic arc. Although it’s set in a pre-Dobbs v. Jackson world, one would expect a greater sense of urgency to drive the narrative in a play about such a hot-button topic. While several characters make compelling, emotionally charged cases for their positions—including personal abortion stories by Dr. Gray, city council member Cheryl Lewis (Veronda G. Carey), and 19-year-old BWHI employee Kayla Brown (Milan Falls)—their arguments feel somewhat disembodied, as if we don’t know the characters well enough to be fully drawn into their experiences.

An additional factor contributing to this disconnect is the poor sound quality, which made it difficult to hear several of the actors. The 16th Street Theater, a company based in the near western suburb of Berwyn, performs this production at Abbott Hall on Northwestern University’s campus in downtown Chicago. Although the venue is small, director TaRon Patton stages many scenes quite far from the front row. The actors, performing without microphones, also compete with a loud HVAC system. One hopes that these sound issues will be remedied as the run continues, so audiences are not distracted by having to lean in to catch all the lines.

Despite these complaints, The Billboard marks an important contribution to conversations about reproductive rights. As nearby states outlaw or restrict abortion and Illinois becomes a destination for more people seeking this care, real-life versions of the Black Women’s Health Initiative are sure to face new challenges in the months and years ahead. By focusing on a specific Black community that she knows well, Moore highlights the ways in which abortion intersects with issues of race, gender, healthcare access, and economic justice. While her first foray as a playwright is not without flaws, Moore’s journalistic expertise on this topic is valuable and timely.‍