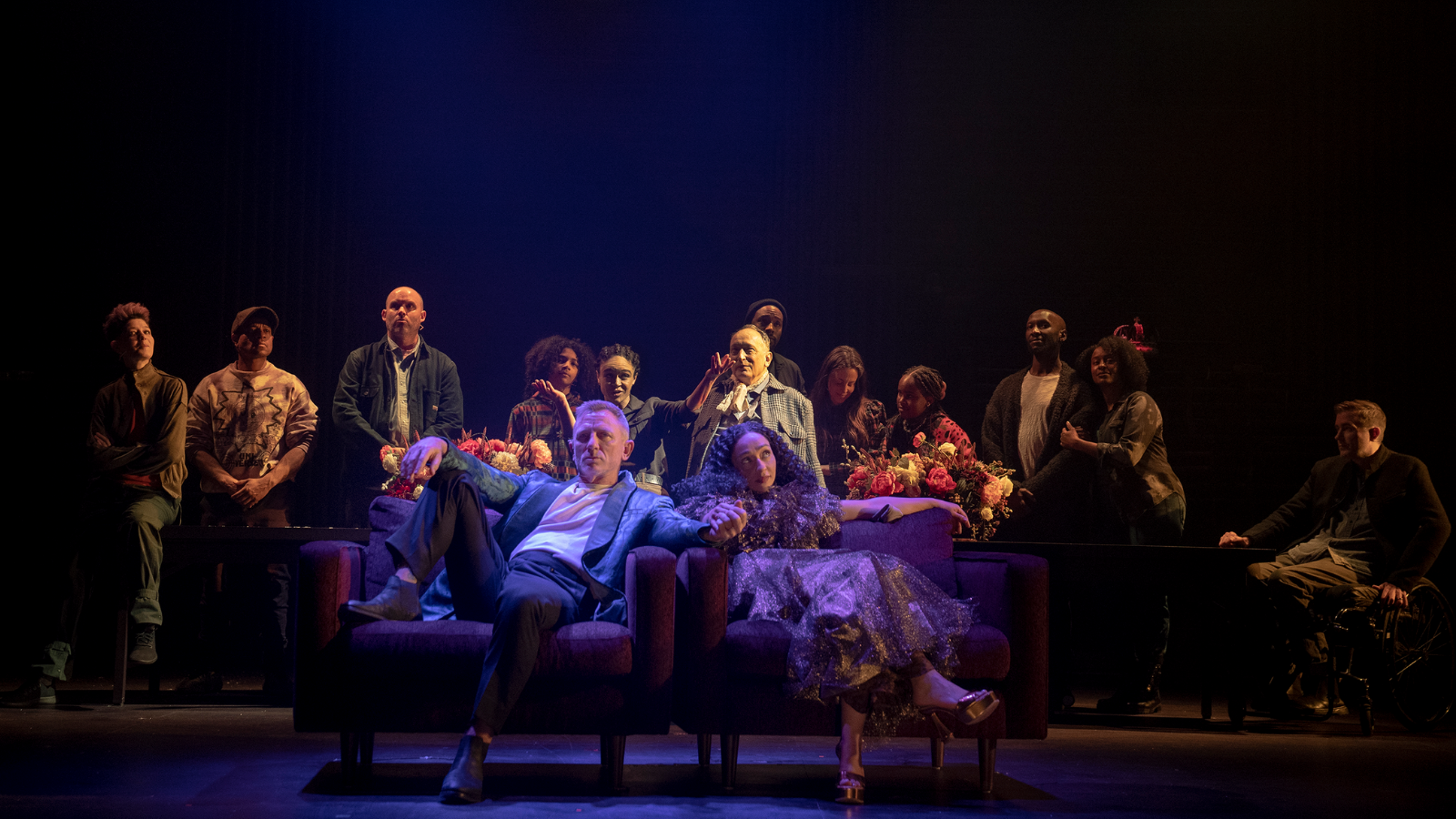 The Macbeths are chilling at the start of the play—the couple, laidback on a couch upstage as a man is hung upside-down, are both relaxed and off-putting. Played by Daniel Craig and Ruth Negga, they’re a frighteningly attractive pair, resting on their absolute command of an audience’s attention. They deserve it, too, though director Sam Gold’s production does everything it can to take it away from them, through a series of hyper-modern, hyper-lax choices that turn the heat all the way down on Shakespeare’s iconic tale of despair and bloodlust.

Some of this boils down to where we are, culturally, in terms of mounting Shakespeare. At a certain point, someone decided we should no longer stage the Bard’s tale in any way that might seem stuffy, too literal, too reminiscent of an English teacher’s dusty DVD case.

Macbeth, perhaps the most out of all 30+ of the man’s plays, begs for high drama. Delusion, avarice, treason, sex, power are essential to properly portraying the story, yet are rarely present in this chilled-out production. If you’re going to bypass swords and crowns, at least make evident their wounds and weight.

Not only does this street-clothes production do away with any sense of regality, save for a luxurious robe Craig wears in the second act (costumes by Suttirat Larlarb), but Gold’s vision is to make Macbeth as “approachable” as possible. A pre-show speech by the hilarious Michael Patrick Thornton informs us of Shakespeare’s time writing this as a plague raged through England and people turned toward the supernatural. It’s close to the audience interactions famously espoused by traditional Globe productions — which a note in the Playbill unwisely evokes — but this attempt to appeal to the everyman becomes tiresome. Immediately after Duncan (Paul Lazar) is killed, he walks downstage, cracks open a cold one and asks, “You ever choke on beer?”

It doesn’t help that his stabbing is performed farcically to strings reminiscent of Bernard Herrmann’s work on Psycho, though Gaelynn Lea’s original music overall is tremendously spooky, and close to period-appropriate.

Some of this casualness pays off. The actors amble around the stage as the ghostlight is removed and places are taken, so Craig’s early puzzlement at being in a play smartly mirrors Macbeth’s shock at encountering the witches’s prophecies. The actor is well at ease with the Bard’s language, reciting his sonnetic dialogue freshly and vividly, but is left to linger in this calmness by Gold’s a-direction. Negga, an incredibly skilled actor who last season earned raves as Hamlet, is handed what is surely the least-present Lady Macbeth in the play’s history. The role has actually never been that big, just made to loom large in an audience’s imagination through the long line of diva turns that have come to define her role. Negga is well-equipped, but Gold sets for her a flat battleground.

The production could desperately use more gravitas, if only to land the severity of the Macbeths’ plans to rise in the English chain of command. The scheming couple onstage at the Longacre right now seems about as shaken up by their bleeding ambitions as they might be about what color wallpaper they might use next. Gold’s production underplays everyone’s emotions to the point of nothingness.

Until the final ten minutes, when he cruelly shows us what might have been. Plunged into darkness, Jane Cox’s lighting design eerily shines blue, red, and green lights on a frenzied Macbeth, pushed to the front of the stage by a pipe-laden wall straight out of H.R. Giger’s designs for Alien. Blood is splattered, Mikaal Sulaiman’s sound design goes absolutely ghostly, and I found myself on the edge of my seat. This was the Macbeth I know: a knife to the gut, twisted inward into the darkest parts of your soul. And then it ended, and I was chill again.

‍Macbeth is in performance through July 10, 2022 at the Longacre Theatre on West 48th Street in New York City. For tickets and more information, visit here.