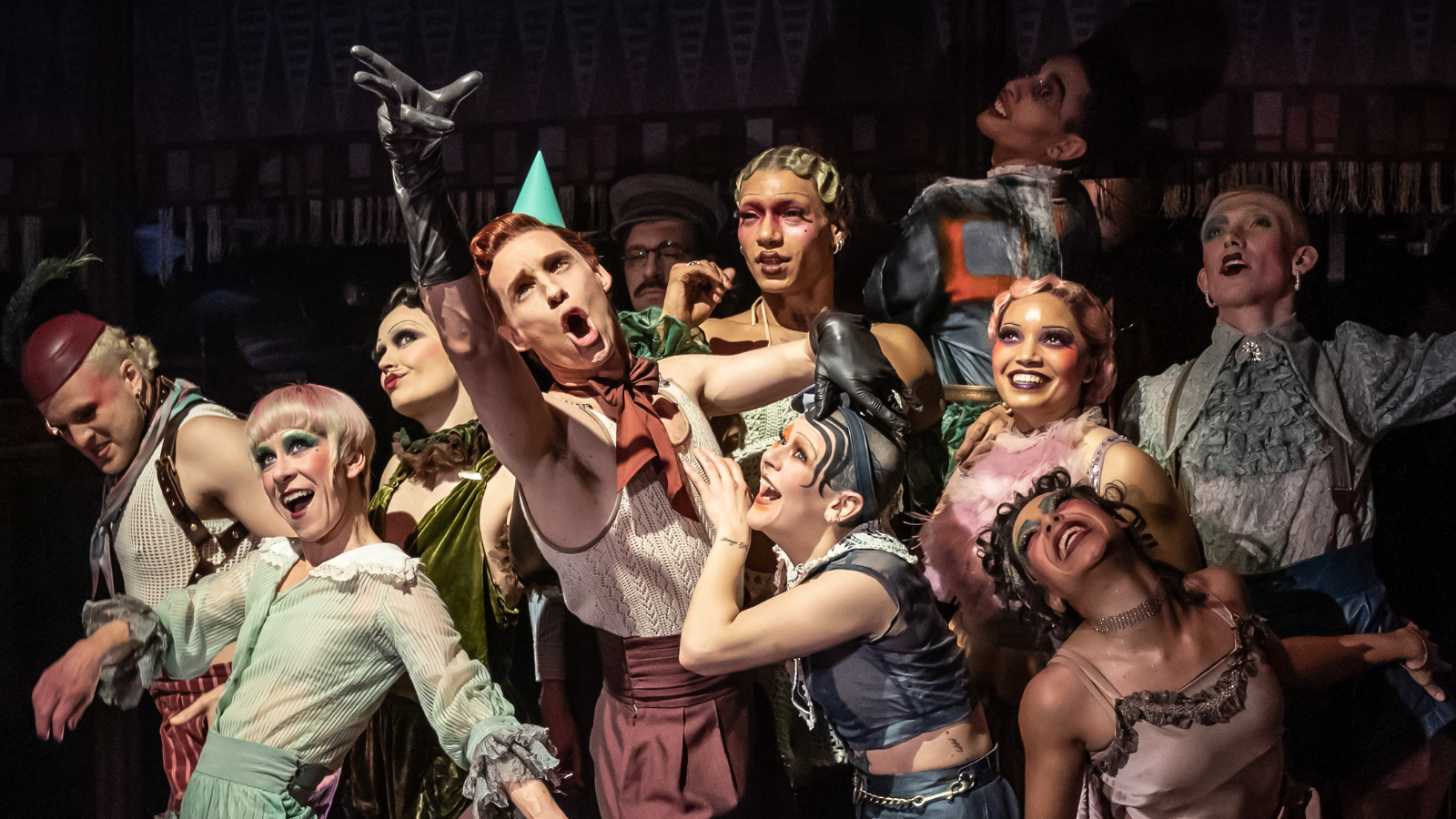 Eddie Redmayne and the cast of Cabaret | Photo: Marc Brenner

Wilkommen, bienvenue, and holy sh*t! When the time came to sit down and listen to the Cabaret 2021 London Cast Recording, I knew that I was going to be in for a wild ride but I wasn’t quite prepared for this.

As is tradition with cast recordings at Theatrely, I sat down to try and write out a few musings on my favorite tunes from the album. After winning seven Olivier Awards last year, I shouldn’t be surprised that this album would shake me to my core, but Eddie Redmayne, Jessie Buckley, and the rest of the cast have delivered something wholly unique to my theatre-loving ears. Hey Mr. Producer, when’s that transfer happening?!

Note: I couldn’t stop writing my thoughts on almost every song, so instead of 3 or 5 songs, there are 7 and even that was a struggle to whittle down from 10. (Sorry to the title song, “Money,” and “Tomorrow Belongs to Me”). ‍

“Willkommen”
‍Eddie Redmayne is doing the most as the Emcee in this opening number. His German accent is harsh, fun, and disorienting, exactly what I want from my master of ceremonies. There’s also a weird bit of Daffy Duck in there (obsessed). The monologue introducing the Cabaret Girls and Boys is utterly unhinged, in a good way. By the time he/they is exasperatedly trying to stave off Mitzi’s wild dance moves—she’s already lost a waiter, two tables, and three bottles of champagne!—I’m all in for whatever is about to happen in the next hour and 15 minutes. Plus, who doesn’t love an Oscar winner making a cheesy masturbation joke?

‍“Mein Herr”
‍Jessie Buckley is really doing something with this rendition of Cabaret’s biggest solo number. If Liza Minelli’s Sally Bowles had a wide-eyed razzle-dazzle, and Natasha Richardson’s Sally was full of zippy determination, Jessie’s has an anger that is downright murderous. By the time she lilts “man by maaaaan” and screams “FAREWELL!” she sounds like she’s going to kill someone while twirling around with a smile. Again, obsessed, especially since she does the same thing with the next track, “Perfectly Marvelous.”

‍“It Couldn’t Please Me More”
‍Oh, Fraulein Schneider and Herr Shultz. Has a doomed couple ever been more charming than fawning over the luxury of a pineapple in the Weimar Republic? For a blissful moment, Liza Sadovy and Elliot Levey make you forget that these two love birds are hurtling towards a tragic ending with this upbeat and schmaltzy number. It’s also the perfect palette cleanser following a very bawdy “Two Ladies,” worth a mention on this list for the new orchestrations alone.

‍“Maybe This Time”
‍Pass the tissues, please! A heartbroken longing from Sally here is exactly what’s needed for this number. My personal connection to this song is strong, so it’s easy to mess it up, but Buckley knocks it out of the park. Bonus points to the album producers for including the live applause at the end.

‍“If You Could See Her”
‍In the middle of the inevitable slow lull that exists in any Cabaret production (props to all involved for the deep character development but the lack of toe-tapping numbers is jarring after the breakneck pace of the first two-thirds of the show), this is a welcome reprieve thanks to Redmayne’s incredible vocal performance here.

‍“What Would You Do?”
‍I can only imagine Liza Sadovy got the biggest standing ovation every night after this song. Caught between a rock and a hard place, Fraulein Schneider sings her heart out trying to ignore the inevitable. The rhetorical question at hand has never been more simultaneously hopeful and dark.

‍“Finale”
‍Honestly, this song is post-coital. I’m spent and I need a cigarette—the perfect ending to a wild ride. Auf wiedersehen.