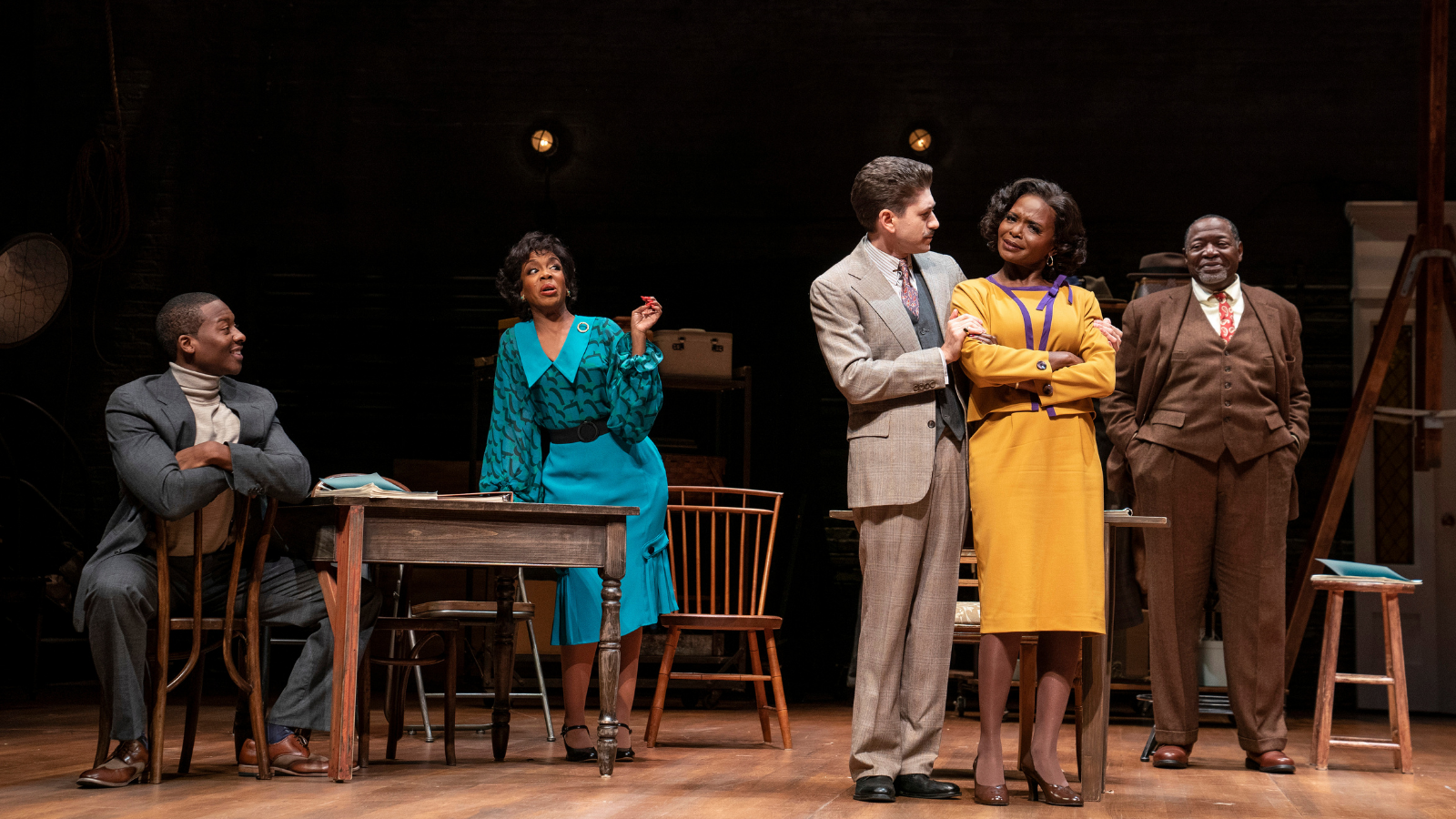 The company of Trouble in Mind | Photo: Joan Marcus

Alice Childress had a lot to say about being a Black woman working in theatre in 1955, and channeled those righteously indignant observations into Trouble in Mind, which finally opened on Broadway earlier tonight. The work had been scheduled to transfer from its successful original off-Broadway run, but Childress would not make the cuts producers felt would smooth out the play’s open-faced callout of systemic racism, and the production was canceled.

The story of how the play finally made it to the Great White Way is a bittersweet triumph that says more about our culture than about the work itself, and Roundabout Theatre Company is ensuring that we know it, announcing it before performances and noting it in all of its advertisements. The play’s insights, and the fact they remain as relevant now as they were over 60 years ago, are equally more about the context than the material. Directed by Charles Randolph-Wright without the red-blooded urgency it calls for, it is more of a respectful replica of a time capsule than an authentic relic itself.

What the production does give us is a trenchant, powerful lead performance from LaChanze as Wiletta Mayer, a veteran actor rehearsing a play about racism written and directed by White men. The gravitas, lived experience, and magisterial presence she brings to the role is worth the ticket price alone, and makes a fantastic case for an immediate revival of Gypsy. Looking gorgeous in Emilio Sosa’s elegant costumes, she is unfussy and relaxed while still delivering Childress’ critiques with the laser-sharp precision of a woman with decades of experience in the business.

The similarly seasoned Wiletta starts the show by imparting bits of wisdom about how to appease the White people in power to newcomer John Nevis (Brandon Michael Hall), who all too eagerly accepts her suggestions. Millie Davis (a resplendent Jessica Frances Dukes), another accomplished actor used to playing stereotypes to remain afloat, echoes Wiletta’s sentiments, opening a window into a Black sisterhood of thespians that the production leaves largely unexplored, though is played powerfully by LaChanze and Dukes.

The strength and dignity of LaChanze’s performance is matched by Chuck Cooper, who plays the amenable Sheldon Forrester, a Black actor unwilling to rustle the feathers that could cost him his job. The magnetic Cooper portrays him as a lovable goof with a weary heart, just looking to pay the bills. His comic relief is dexterous, and a solemn speech he cautiously relates, about a hate crime he once witnessed as a child, is poignantly performed but undermined by Kathy A. Perkins’ exaggerated lighting.

Two White cast members, the ditzy starlet Judy Sears (Danielle Campbell), and the ill-informed Bill O’Wray (Don Stephenson), round out the play-within-a-play, directed by Al Manners (Michael Zegen, as a cocky young hotshot) with a systematic blindness to his Black cast’s input. Their narrowness of vision and lack of empathy gradually tries Wiletta’s patience, and she begins to speak up, against her career’s most profitable interests.

It is when Wiletta and Al argue that the play strikes hardest, though Childress peppers the script with caustic reminders that racism is a minute-by-minute offense. That said, a collection of microaggressions is not enough to build dramatic tension, and Randolph-Wright’s plain direction doesn’t capitalize on the wealth of opportunity present in the gifted cast. I love and respect time capsules—I will see Hello, Dolly! in its original staging til the day I die—but this is one that, aside from providing the late Childress a dignified, delayed success, could’ve been dusted off a little better.

Trouble in Mind is now in performance at American Airlines Theatre on West 42nd Street in New York City through January 9, 2022. For tickets and more information, visit here.