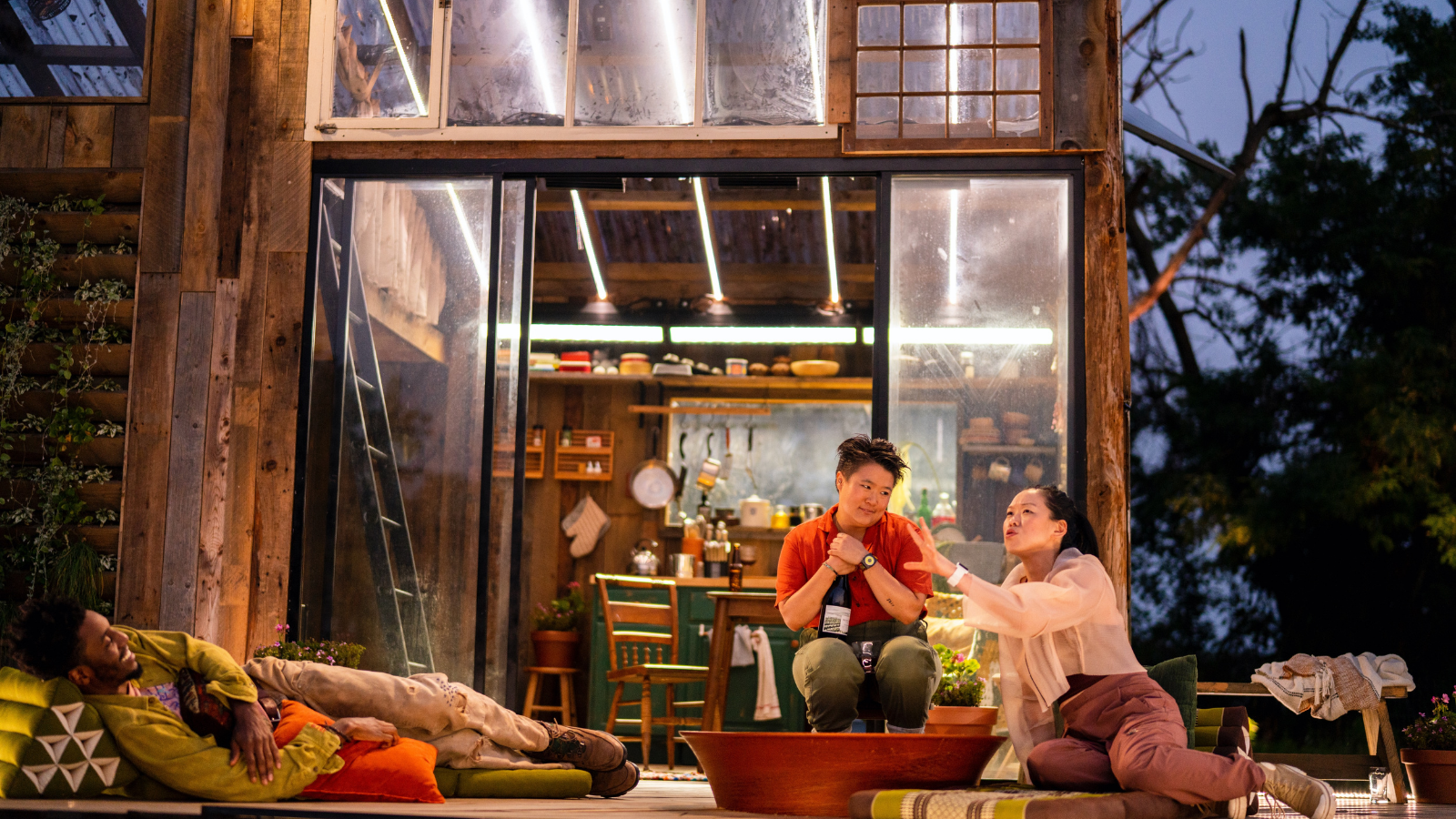 Most theatrical productions begin once the lights go dark and the curtain rises, perhaps if you are lucky you might get some pre-show music to set the scene. At Walden, a new work from playwright Amy Berryman at TheaterWorks Hartford, this is far from the case.

Down a dirt path along the Connecticut River, we come upon a beautiful outdoor cabin with hammocks, a full garden, and live chicken to boot. Set in a not too distant world where mankind has all but bankrupted Earth’s natural resources, we meet Stella (Diana Oh) and her eco-loving boyfriend Bryan (Gabriel Brown). Cassie (Jenna Yi), a NASA botanist and twin of Stella has just returned from a year-long mission on the Moon, reunites with her sister and so sets up a classic, futuristic family drama where sibling rivalry and resentment abound. Relationships are put to the ultimate test when Cassie asks Stella to rejoin the galactic ranks of NASA for a mission to Mars, and here is where the true fun begins.

Directed by Mei Ann Teo, the production feels crisp and moves along well thanks to the talents of the three actors who each hold their own while having their individual moments to shine. Teo utilizes every little bit of You-Shin Chen’s glorious outdoor setting as her playing ground to great effect.

What truly makes the performance soar is Hao Bai’s innovative sound design. On each chair, a pair of ~sanitized~ headsets are there to truly immerse you in the story. From hearing faint crickets in the woods to whispers from across the field, Bai’s design is truly out of this world. Was that too on the nose?!

Berryman’s writing is smart and fresh, with the perfect amount of tension between the trio to sustain and keep the audience along for the ride. An ambitious tale of climate change, space exploration, and familial strife are combined in this transcendent piece.

Following a world premiere on the West End earlier in May produced by Sonia Friedman, TheaterWorks Hartford has taken this new ambitious drama and produced a rather incredible US Premiere. One of the most thrilling and satisfying nights at the theatre that I have had the pleasure of attending in a very long time — this is one of those performances that will be with you for many days.

“Walden” has been extended through August 29 and will stream online August 15-29 as well. For tickets and more information, visit here.