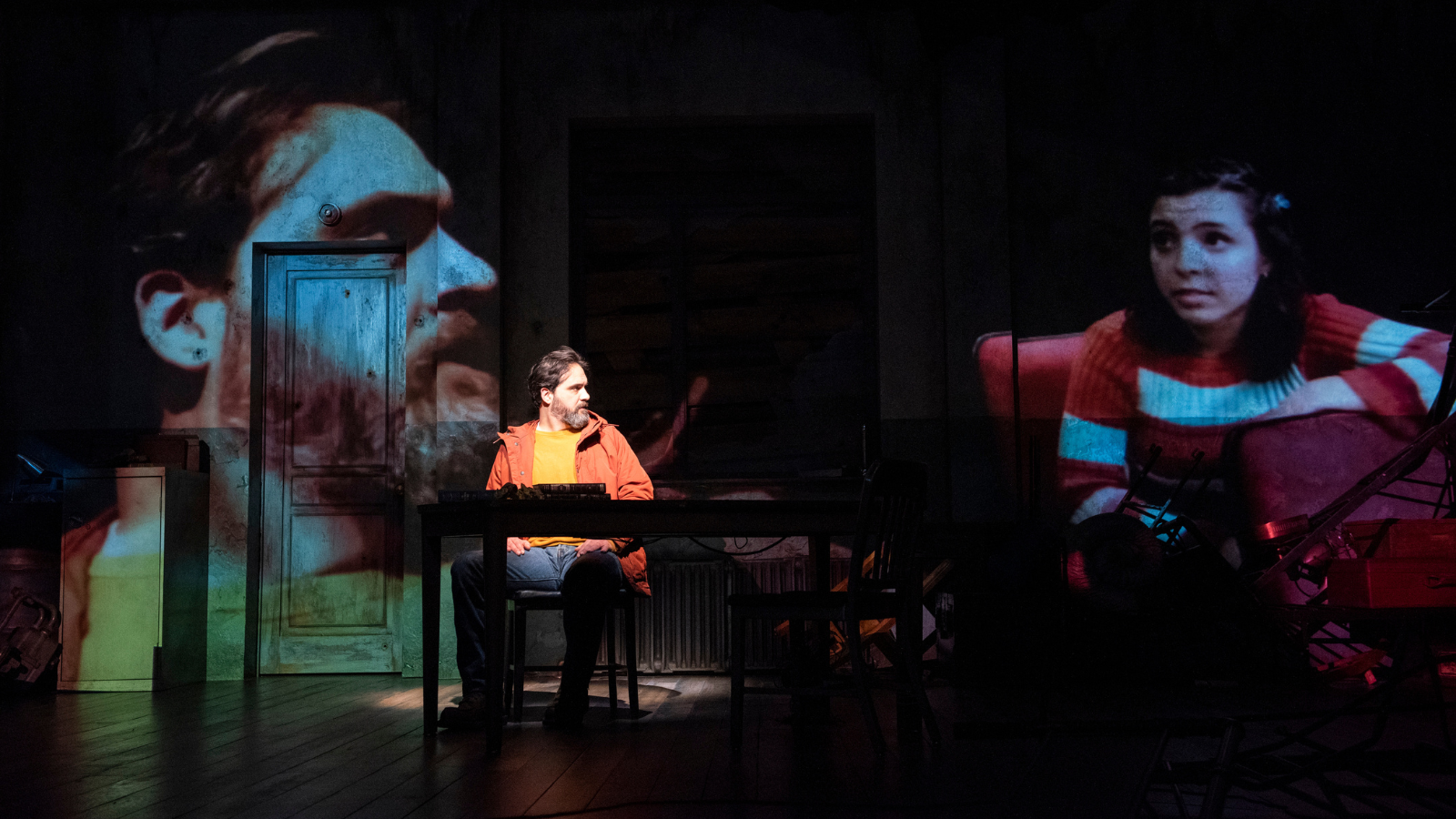 On October 23, 2002, a Chechen military group overtook a performance of the Russian musical Nord-Ost at Moscow’s Dubrovka House of Culture, holding around 912 audience members and artists hostage for over two days. The terrorists were suicide bombers, hoping to bring attention to Russia’s brutal siege of Chechnya after the dissolution of the Soviet Union. Eventually, the newly elected Vladmir Putin gave the go-ahead to pump the opera house with toxic gas, allowing the Russian government to murder the suicide bombers. Still, advocacy groups say that around 174 innocent civilians died from the toxic gas.

One of the best-known creative engagements with this incident is John Keane’s 2006 painting series “Fifty Seven Hours in the House of Culture.” Keane painstakingly recreated photographs and documentary stills of both civilians and terrorists, but intentionally kept in bright pink and blue brushtrokes on the canvas, calling attention to the beauty and grotesqueness of his artistic recreation. “[T]he imagery alludes to the bubble of immunity which most of us occupy in our daily lives as we watch the world outside, literally screened off by our televisions,” Keane said in an artist statement. “...this bubble can now be so easily burst in the most brutal way by people and events that we feel have nothing to do with us.”

Nearly twenty years after the Moscow theatre hostage crisis, the world has a new piece of art that rivals and sometimes surpasses Keane’s paintings in terms of empathetic engagement with recent history: the moving new play “We declare you a terrorist…” by Tim J. Lord. Making its repertory world premiere at Bethesda’s Round House Theatre as a part of their first annual National Capital New Play Festival, “We declare you” seeks to provide never-before-seen depth to all members of the hostage crisis. However, this production still cleverly builds off of Keane’s work, calling attention to the shallow surfaces the world often succumbs to in retelling tragic stories.

The show opens in an interrogation room, brought to monstrous life by set designer Lawrence E. Moten III, filled with broken bed frames and chairs, boarded up windows, and burst wires, and sounds of torture coming from the other room. A man with a black bag on his head is seated at a table, before a domineering Federal Security Service Officer (Elliot Bates) takes it off to reveal our protagonist, the lonely and vulnerable man referred in the script as The Writer (Cody Nickell). With a hulking body and sadistic sense of humor, the Officer grills the Writer on why he was attempting to sneak into Chechnya. Things escalate, emotionally and physically, until the Writer agrees to divulge secrets and is launched back into his memories.

Lights out. When they come up on The Writer again, he’s reliving his experience at the Moscow hostage crisis—turns out he’s the writer of the musical Nord-Ost, and rushed into the theater once he discovered it was being attacked. In the midst of panic, The Writer’s alternating between two heated conversations. One is between him and the sixteen-year-old Masha (Bekah Zornosa), a feisty teenager who’s unimpressed with the musical she just witnessed. Even in the face of death, everyone’s still a critic, huh? The second conversation is between him and Kayira (Ava Eisenson), a female suicide bomber holding her section of the theater hostage. The Writer believes if he can try to understand Kayira’s viewpoint, understand the pain driving her to such dangerous actions, he might be able to save the audience who came to see his musical.

This production’s true twist is that the conversations happening at the Moscow hostage crisis are largely staged through projections. While The Writer stays onstage throughout the entire performance, for the most part Kayira and Masha are only seen on projections, with cameras recording their live performances from other rooms backstage. The show continues alternating between the interrogation room happening onstage, and the hostage crisis being projected behind The Writer.

It’s a true theatrical risk to treat half of the show’s running time and actors like a backstage film. It’s essentially the same staging choice that Ivo van Hove made in his Broadway revival of West Side Story.

But under the masterful hands of co-director/multimedia designer Jared Mezzocchi, a true pioneer of hybrid digital/in-person performance, the filmed sections never feel superfluous. Like John Keane, Mezzocchi is calling attention to the surfaces onto which we portray terrorists. He renders projections of Kayira onto particularly uneven parts of the set, as if purposefully calling our attention to usually flat, surface-level caricatures we’re used to consuming about suicide bombers. There were times I wished the video projections opened up, giving us a more panoramic view of the opera house. But I still appreciated Mezzocchi’s intense close-ups of actors, which give us a sense of intimacy and claustrophobia.

Mezzocchi and co-director Ryan Rilette draw out some indelible performances from their ensemble of actors. Zornosa fully embodies a teenager’s mixture of wisdom and resentment. Eisenson takes what might have been a bit part and imbues it with tragedy, longing, and care; when she states to her hostages that “Threatening your life is more valuable than letting you go and hoping you’ll find a way to change the government,” we see her uncontrollable rage against apathy. And as a threatening officer, Bales knows that intimidation often comes from silence and restraint.

But it’s Cody Nickell as The Writer who really commands the show. Acting against two projections—while sitting down!—would be a challenge for any actor, but Nickell makes the audience feel as if it’s perfectly natural from the beginning. Nickell fully embodies The Writer’s yearning to truly understand Kayira, along with his guilt in creating the circumstances for the hostage crisis. The result is a protagonist that is uniquely vulnerable but steadfast. It’s an endearing performance, and one that drives home the play’s sincere message of empathy home.

The Writer’s heroism isn't one of toxic martyrdom or epic salvation, but instead of the belief that art still has the power to connect the world in strange ways. It’s a belief called foolish by many characters in the show, but he never lets go of his version of humble heroism.

Maybe “We declare you” itself serves as a sort of refutation against the critique that art simply isn’t enough to solve escalating crises. Though “We declare you” has been gestating as a play since 2003, it feels particularly relevant amidst Russia’s attacks on the Ukraine (it provides a grounded companion piece to Rajiv Joseph’s surreal look into Putin’s KGB days in Describe the Night). It’s thrilling to see a play that actually fulfills its promise of speaking to the present moment. But it’s also thrilling to see a play urging for depth but still acknowledging its translations, the necessary flatness of mimetic representation.

“We Declare You a Terrorist…” is now in performance at Round House Theatre in Bethesda, MD through May 8, 2022. For tickets and more information visit here.