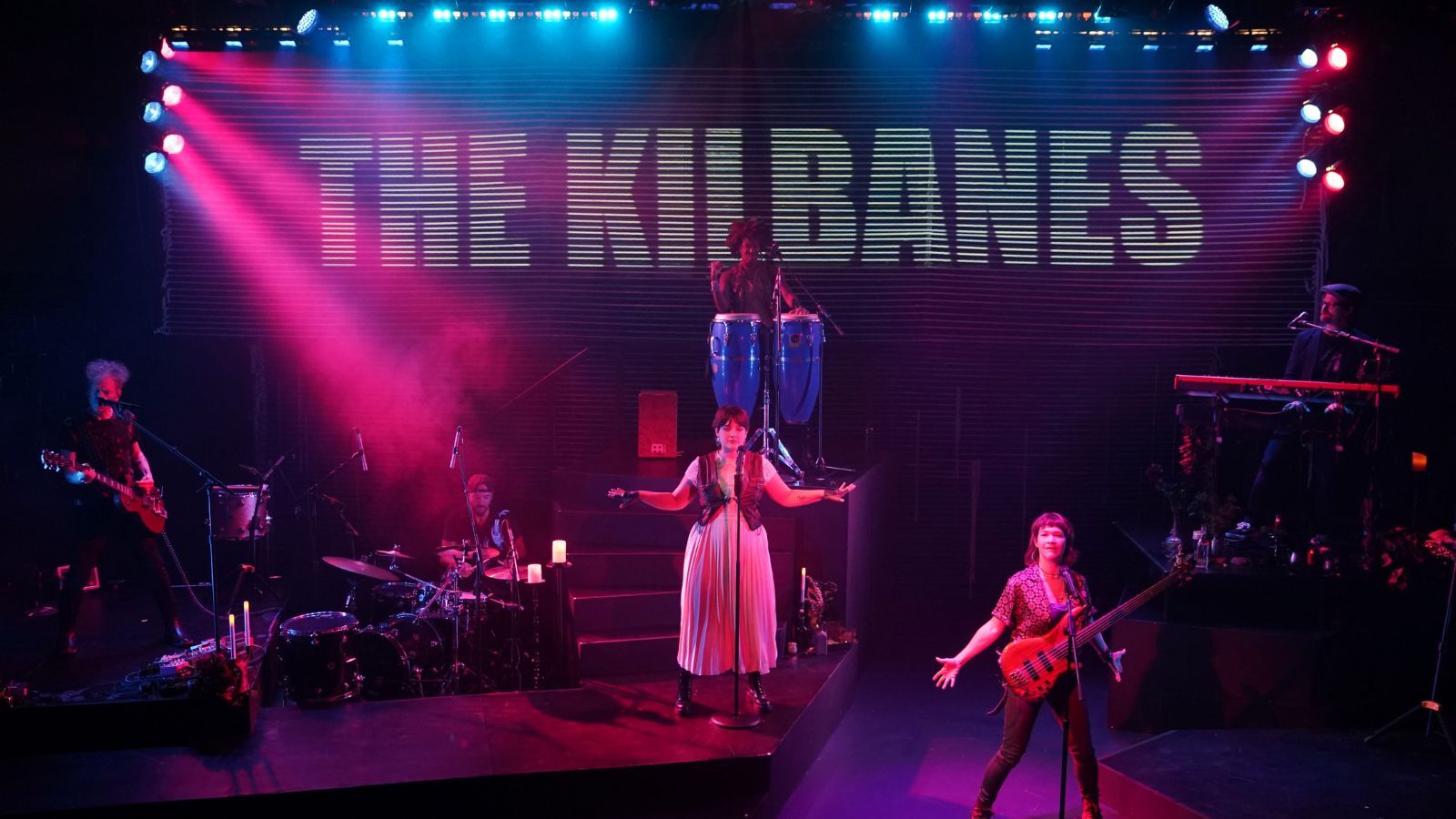 The cast of Weightless at WP Theater | Photo: Joan Marcus

If you’ve ever wanted a Mumford & Sons album with a plot, or maybe a Brandi Carlile X Anaïs Mitchell collaboration, Weightless at WP Theater is for you. Led by the self-described “theatrical rock band” The Kilbanes (Kate Kilbane and Dan Moses), Weightless is enjyable, but disjointed at times. Sitting at just about 75 minutes, it’s a stylized foray into rock, mythology, and sisterhood that can be light if you let it.

The exposition is simple: we’ve entered a concert-like telling of the myth of sisters Procne and Philomela, with our lead players Kilbane (as Procne and primary bass player) and Lila Blue (as Philomela) performing the concert, telling portions of the story, and acting out others. The songs are fun and the tone onstage is playful and humorous—at least at first. In contrast to a big budget musical, or a cutting-edge new play, this piece is pretty comfortably seated in the middle of the landscape. Performances from Josh Pollock (playing the questionably immoral Tereus and the guitar) and Kofy Brown (as omniscient god Iris, also handling percussion and bass) provide layers of conflict and emotion that fortunately steer past the “two sisters separated” trope (I’ve seen Frozen).

While the songs do offer vivid imagery, and have the advantage of catchy melodies, the show’s dialogue lacks in contrast. Though sparse, the occasional spoken line seems to be more of a last-minute addition, a stopper to quickly address any plot holes in between numbers. I would much rather have seen a show fully scored or a musical with longer, more legitimate scenes—not a combination of lengthy songs and the occasional four to five line insertion that feels like a thrown away opportunity.

The show thrives when it is more of a true concert with a theme. The instrumentalists are diversely talented in their respective areas. With Kilbane and Brown seamlessly transitioning through songs while playing, plus Moses on keys and Dan Harris on percussion, there is no questioning the adeptness of the band. Blue offers a stunning performance toward the end after the story’s difficult and surprising twist toward something darker than we started with.

Ultimately, Weightless falls victim to its set and space—in an attempt to diversify the playing field that is WP Theater, the show has built up platforms and a pseudo-staircase system for different instrumentalists that ultimately corner most of the action to a small area of the downstage. Not only is the physical work limited to a compact patch of flat stage, but the performers are also left to rock full-out within arm's distance of the common audience members. As the musicians push further and further into the seats, the odds of uncomfortable eye contact increase. What may work for an un-mic’d drama does not translate to an amplified musical aiming for a rock concert. For what it’s worth, the pre-show set up of flickering candles and a playlist with songs from Alabama Shakes and Florence and the Machine do set a great vibe (scenic by Peiyi Wong, sound by Joanna Lynne Staub).

While there may be a few missteps, the show brings something new and different to the frequently attempted realm of mythology with a contemporary spin. It rocks louder than anything else on the Upper West Side.