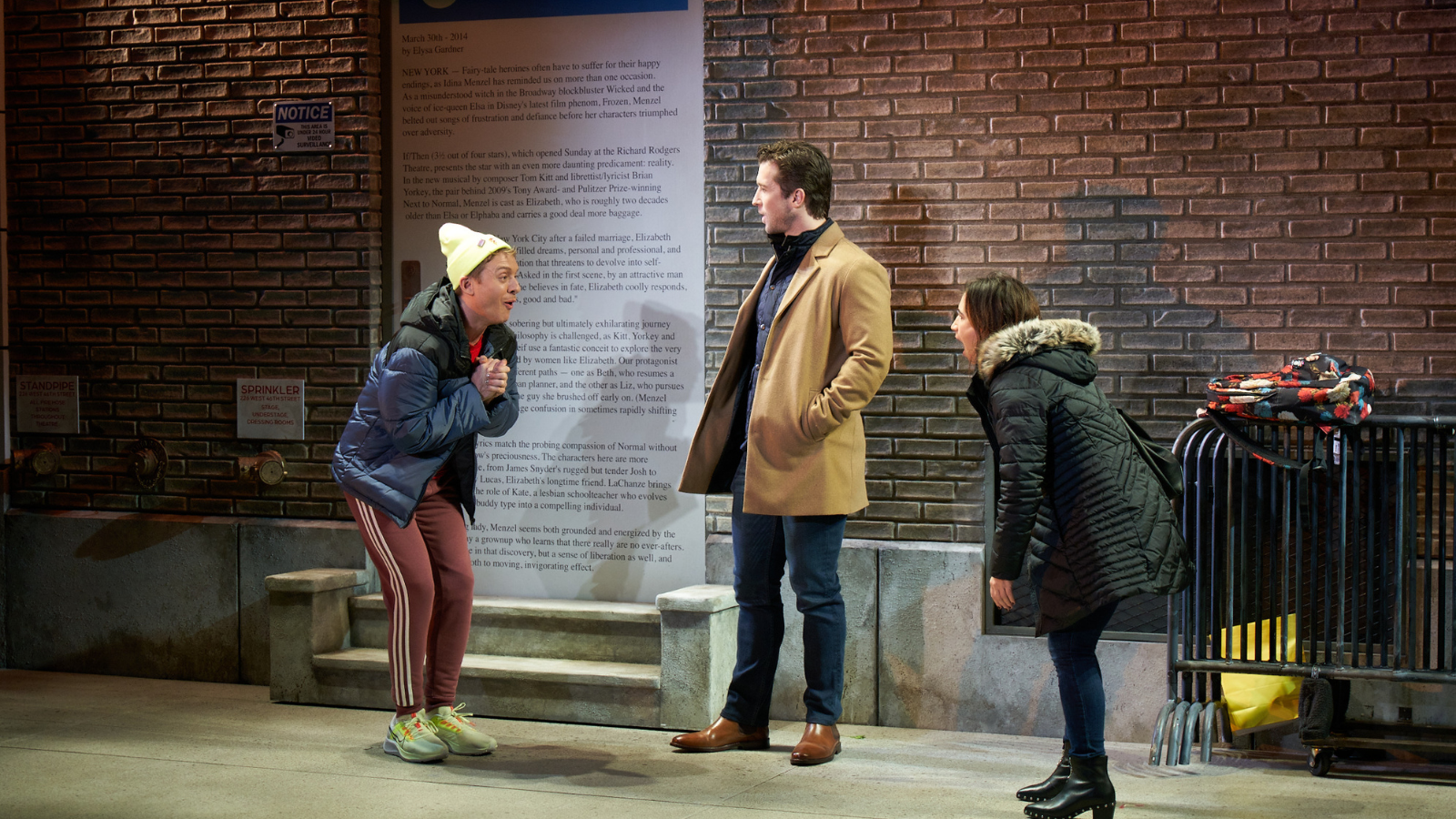 When I walked into the Newman Mills Theater at MCC for Which Way to the Stage, “So Much Better” from Legally Blonde was playing, and I immediately began to sing along, as did most of the audience. The entire pre-show music was musical theatre bops, classics that fans love to belt out. It was in this curated playlist that I knew that this was a show for the true fans—and I was entirely proven correct.

Which Way to the Stage by Ana Nogueira begins at the stagedoor of If/Then, a perfect encapsulation of the many, many niche musical theatre references to come. Here we meet Jeff (Max Jenkins) and Judy (Sas Goldberg), two best friends trying to get Idina Menzel’s autograph. Both are auditioning actors with other jobs: Judy is a real estate broker and Jeff is a Crunch gym instructor and drag queen. While they are not the more-expected teenage fans excitedly squealing at a stage door, they are still extremely passionate (I’ll say obsessive, but with love) fans of musical theatre. They debate who the best Mama Rose is and whether all the best parts are for women; they bicker about how to best stage a number, and even educate the finance-bro-turned-actor, Mark (Evan Todd), about how the Chicago revival is, in fact, not good.

The show is a love letter to theatre people, working actors, those who love to stage door, fans, audience members, and everyone that sings along to cast recordings. It is an expertly crafted list of niche references and inside jokes that would confuse or go over the heads of an average person, but will make musical theatre fans cackle. There’s even a joke about Glass House Tavern. I mean, come on, what more can we ask for? This show was made for us.

The play in a lot of ways is about friendship and community, and the piece certainly celebrates both, encouraging its audience to form its own community. Far from being a cock-eyed optimist story, though, it explores quite a few less-rosey parts of the industry: difficulties of breaking in, the slog of auditioning, predatory male directors, prejudicial casting preferences, and most of all, who is allowed to be part of this world.

While Jeff and Judy wait at the stage door over and over, in a playful nod to Waiting for Godot, their debates gradually turn more serious, their comments to each other more biting. They fight about a boy, whether Jeff’s drag impersonations are sexist, the gender politics of performing, and the demands of normative femininity. They disagree about whether Judy can say “fag” if Jeff can say “bitch,” and if Jeff or Judy will ever make it as actors. Their very close friendship is put to the test, and we get to see how friends that know each other so well also know how to hurt each other just right.

Sas Goldberg, who I’ve loved since Significant Other, and Max Jenkins, who I recently adored in Special, both give flawless performances. They are perfectly cast, have impeccable chemistry and comedic timing, and absolutely embody the superfans they play. I can confidently say I know these people, and they captured them down to the smallest details. I know the auditioning actress making her living in real estate. I know the Boston Conservatory gay working at a gym and as a musical theatre drag queen (Jeff must be an homage/amalgamation of Jan and Marti Gould Cummings, right?). Michelle Veintimilla rounds out the cast, playing several roles (an actress, a drunken bachelorette, a casting director) and showing off her comedic chops and versatility. Todd is the weakest cast member, but perhaps just because he cannot shine next to the powerhouse performances of Goldberg and Jenkins.

Adam Rigg’s set recreates the Richard Rodgers Theatre with precision, and smoothly transforms into an audition room lobby (Ripley Grier? Pearl?) and a drag club (Therapy? Hardware?) with the help of some subway-inspired sound cues by Sinan Refik Zafar. The show runs almost two hours with no intermission, but director Mike Donague, armed with a well-written script, keeps things moving and the cast keeps the jokes coming, so the show never drags.

Much like Jeff and Judy, I couldn’t help but find myself waiting for Idina Menzel to actually come out of the stage door. As the show went on, I was wondering if there would be a surprise cameo. In this, and in every small inside joke, encyclopedic musical theatre reference, and minute cultural detail about the industry, I felt seen and transported, like I was Jeff and Judy on that stage, fighting for a place in the spotlight, and waiting to show off how devoted of a fan I am. Which Way to the Stage is for all of us who have ever wanted to be the life of the party, defy gravity, and jump over the moon.

Which Way To The Stage is now in performance at MCC Theater on West 52nd Street in New York City. For tickets and more information, visit here.