WIFE OF A SALESMAN Is A Moving Portrait of Womanhood — Review 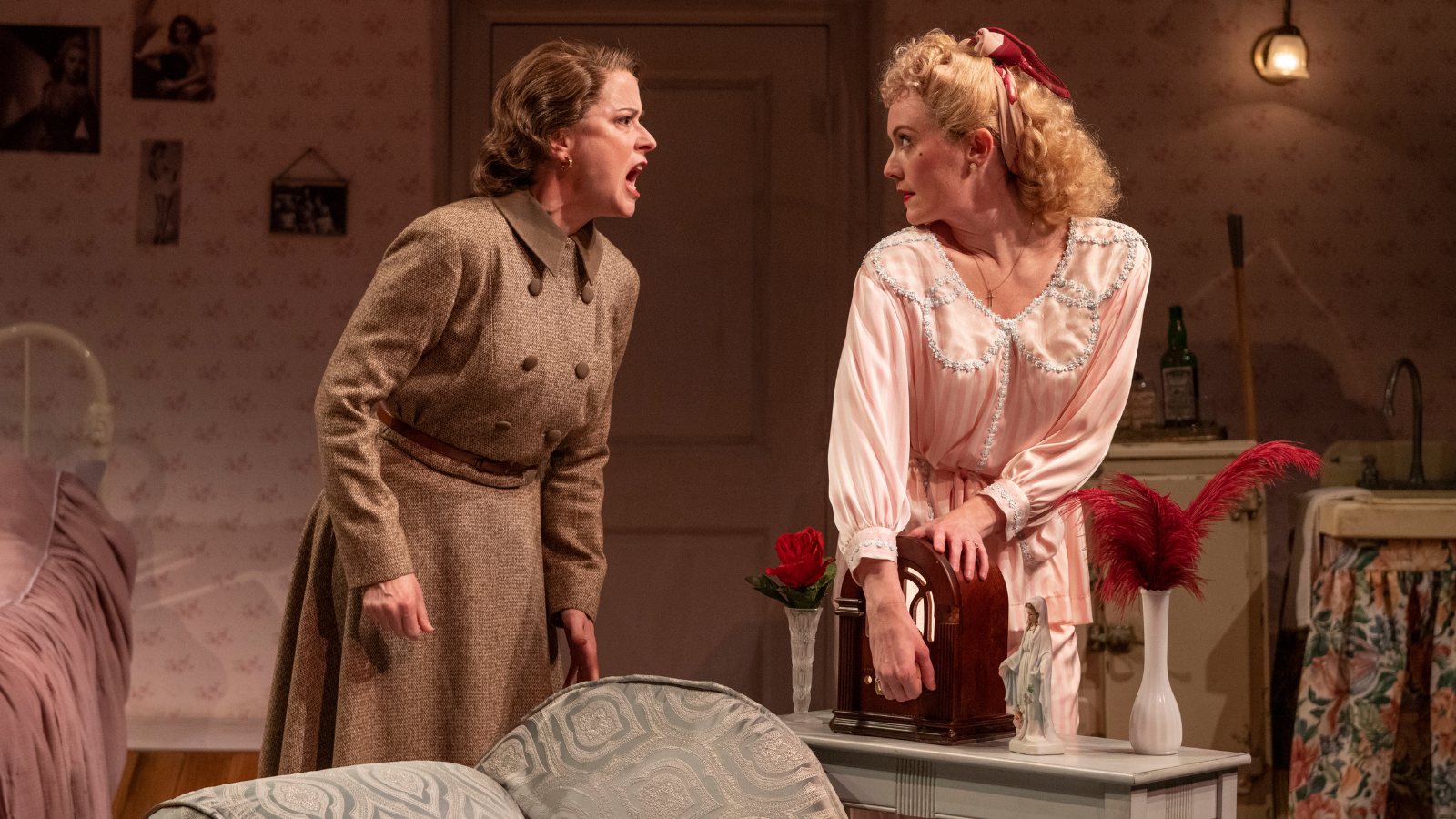 The wife. The mistress. These are the only names given to the protagonists in Eleanor Burgess’ play Wife of a Salesman, now in its world premiere at Writers Theatre, yet these simple labels belie two richly complex characters. Delving into their grandest dreams, most intimate desires, and deepest hurts, Burgess crafts a moving portrait of womanhood in the heyday of the American ‘nuclear family’ — the 1950s — and draws thought-provoking parallels between past and present.

Based on characters from Arthur Miller’s Death of a Salesman, the two women meet when the wife of the eponymous salesman (Kate Fry) travels six hours to confront her husband’s mistress (Amanda Drinkall) — an incident that never occurs in Miller’s original but creates fascinating dramatic possibilities in Burgess’ play. Wearing a modest tweed dress and sensible brown pumps, Fry looks every inch the dutiful housewife when she knocks on the door of the mistress’ tiny apartment, posing as a fabric saleswoman to gain entry. In contrast, Drinkall’s mistress emulates the style of the film stars she idolizes, clad in silky pink pajamas and sporting curled blond hair, red lipstick, and pink rouge.

Desperate to save her family, especially her two sons who need their father to be present, the wife implores the mistress to end the affair. Initially, the encounter is as tense as one would expect, with feelings of jealousy, competition, and rage always threatening to boil over. Reaching a precarious truce as the conversation continues, the women begin to share personal details that perhaps only two lonely strangers — albeit strangers with a lover in common — would expose.

Burgess’ dialogue intersperses witty humor with pithy one-liners that go to the heart of the many challenges that these women face. Although they benefit from certain privileges as white, straight, able-bodied, Christian women, the wife and the mistress both feel constrained by the societal structures of their era. Both are smart and ambitious; the wife was a talented math student who would have enjoyed being an accountant, while the mistress is a savvy secretary who prides herself on staying several steps ahead of the bosses. In reality, the wife’s abilities have been spent on a lifetime of unpaid labor, including managing the household finances. Meanwhile, the mistress feels undervalued answering phones for a living and dreams of moving from Boston to California to start anew.

Both women also long to be loved and appreciated. The wife, who has worked every day of her marriage to meet her husband’s needs, mourns that he never asks how her day has been and rarely even lets her finish sentences. Despite a string a lovers and a conventional beauty that has attracted attention since she was in junior high, the mistress expresses a sense of loneliness that drives her to listen to the radio every waking minute when she is alone in her apartment. The paradoxes of motherhood are another recurring theme, with the wife sharing the great joys and extreme exhaustion that she has experienced raising two boys. Fry and Drinkall show an impressive range throughout, making these characters both entertaining and sympathetic.

Roughly halfway through the play, a surprise plot twists breaks the fourth wall and brings the action hurtling into the present day. While the details will not be spoiled further here, this transition shifts the conversation toward current issues that women face in the workplace, in relationships, and in broader society. While this bold move by the playwright requires the audience to buckle in for the ride, the two timelines layer on top of each other to create a powerful impact. Ultimately, the play’s effect is ambiguous; it echoes the despair of Miller’s classic but offers some tenuous hope.

A final observation: it’s noteworthy that this production, anchored by two dynamic leading women, also features a creative team and crew largely comprised of women, helmed by director Jo Bonney. Its world premiere coincides with Women’s History Month, making a visit to suburban Writers Theatre — which is easily accessible by Chicago’s Metra system — not only worthwhile but also timely.

Wife of a Salesman is now in performance at Writers Theatre in Chicago, Illinois through April 3, 2022. For tickets and more information, visit here.