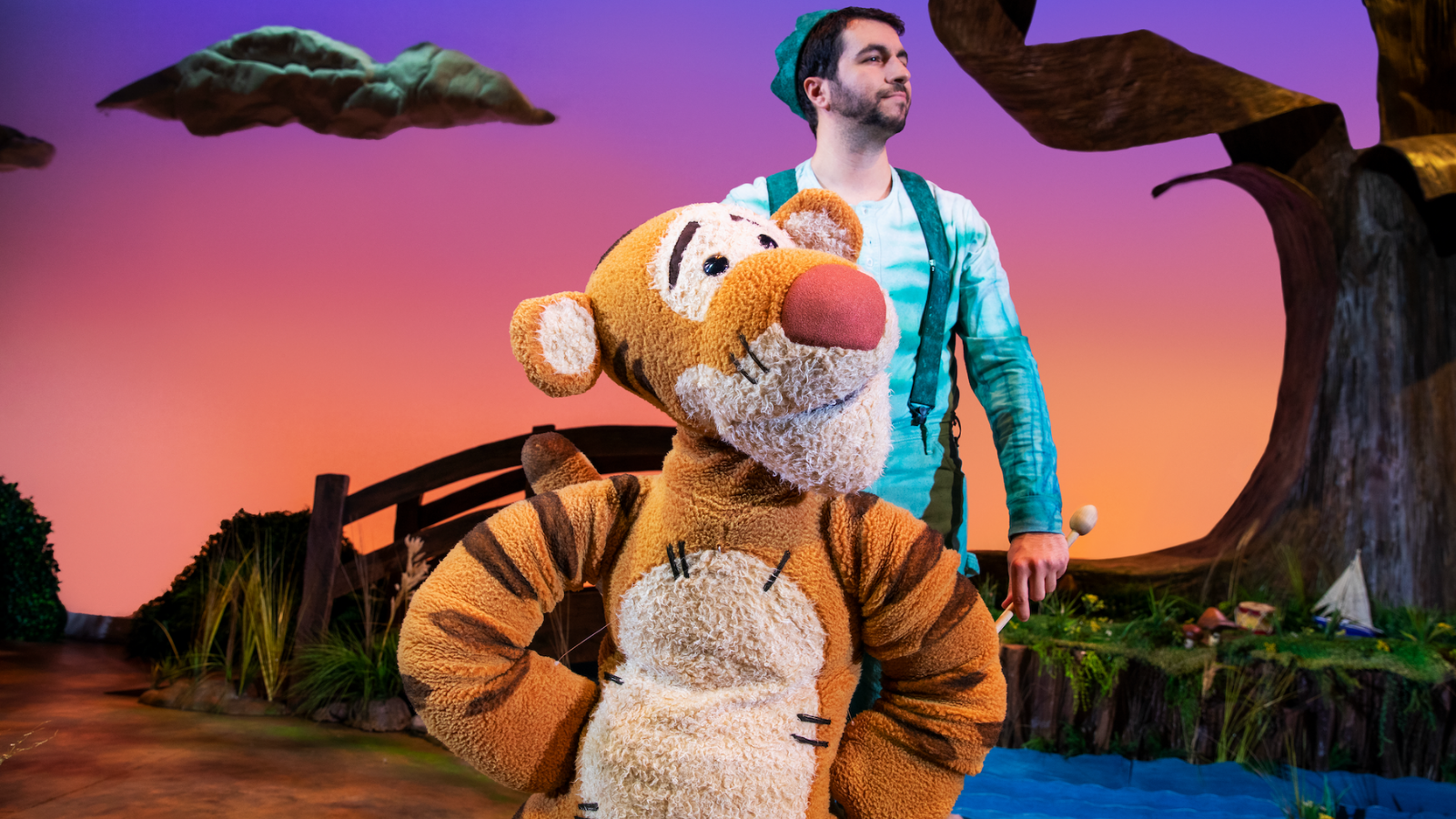 It’s not often that simplicity really soars, but in the new Winnie the Pooh musical that opened last night, joy was found through just that. Featuring mesmerizing life-size puppets and original Sherman Brothers tunes, this delicious new musical is the perfect thing to bring the youngest audience members back to the theatre.

In this Winnie the Pooh story, Christopher Robin has gone off to school and Pooh Bear wants some honey. Luckily, he has some familiar friends who are willing to go on an adventure to find Pooh some.

When crafting theatre for young audiences, the success of a given production relies on the creative team’s understanding of the age group. Not all theatre for young audience shows are for all kids. This Winnie knows exactly who it’s for. Looking around, there were many toddlers in the audience. Once the performance began, every child’s eyes were glued to the stage and completely enraptured by the production. Jonathan Rockefeller’s tender puppets were crafted with such care. Puppets can easily turn to the disturbing side, but Rockefeller’s designs are filled with tenderness. Even the actor/puppeteers are dressed in simple outfits that mirror their characters in a way that supports the design without feeling dorky. Pooh Bear’s puppeteer, played with phenomenal accuracy by Jake Bazel, wears greyish overalls with a blue cap. The design is never trying to mirror the characters, but instead evokes the essence of the characters. David Goldstein’s scenic design supports the puppet’s perfectly. It’s whimsical and childish and instantly captures the eye. As the seasons change throughout the play, Goldstein uses theatrical magic and simplicity to indicate these changes. As it turns to fall, leaves fall over the stage and audience. During the transition to winter, bubbles fall in the audience and wooly, white blankets are placed on parts of the set to indicate snow.

Along with the season transitions, there are little twinkles of simple theatre magic that wowed this audience of tots. During a scene where Tigger is teaching Roo to bounce, they damage Rabbit’s garden. The actors press on pedals behind the set that cause the veggies to fall apart. In another scene, a note from Christopher Robin is blown around the stage by the fall wind. Clear wires pull the note across the stage and into the audience. The theatre magic was obvious to the non-kid members of the audience, but it was exhilarating to experience these simple tricks around children who were absolutely awestruck.

While I loved the story and the set, I do wish the music had been live. I was disappointed that the songs were sung with tracks. It had me feeling like I was watching a performance at a Disney park rather than an off-broadway theatre. It also created a dissonance in the sound; oftentimes the tracks were significantly louder than the performers and some of the lyrics got lost. Performers used extremely detailed character voices that were so thorough and consistent. Perhaps some of the trouble with sound came because the performers were singing with voices and that diminished their ability to project.

With little souls running around the theatre and fidgeting with their masks, it’s important that proper safety protocols are being taken. Happily, Winnie the Pooh is offering rapid tests for children under 12 before the performance and is deliberately selling the performances at a reduced capacity to allow groups to be seated together with space between them and other audience members. While rapid tests are by no means a replacement for vaccines, it’s nice to see that Winnie the Pooh is making its performances accessible to those who are not yet eligible for the COVID-19 vaccines.

The beautiful new Winnie the Pooh musical that opened at the Hundred Acre Wood Theatre is a must see for all families and kids at heart. The playful design and life-sized puppets along with the nostalgic tunes, make it the perfect theatrical event for the whole family.

Winnie the Pooh is now in performance at the newly renamed Hundred Acre Wood Theatre at Theatre Row in New York City. For tickets and more information, visit here.