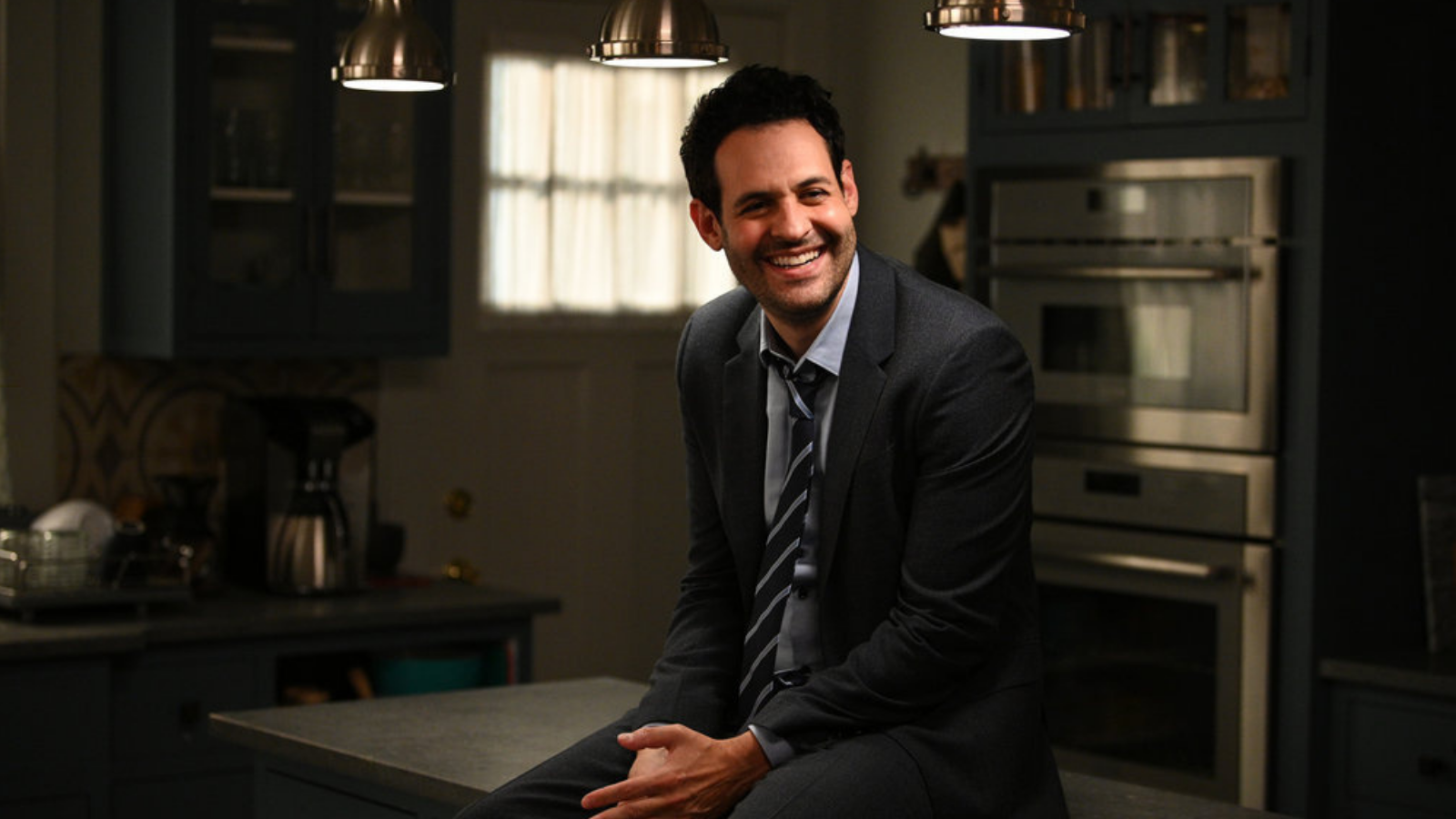 NBC’s hit musical TV show Zoey’s Extraordinary Playlist returned for a second season this week. Theatrely sat down with Andrew Leeds, who plays Zoey’s older brother David, to talk about what we can expect from his character.‍

Theatrely: Tell me a little bit about your role on Zoey's Extraordinary Playlist. ‍

Andrew Leeds: Well, I play Zoey's older brother, David, who seems like he doesn't have it together as much as Zoey does in a way, even though he's a lawyer. So he's obviously not like an idiot, but he's a little sloppier and less Type A, and he's married with now he has a kid that was just born right before the season started.‍

T: So the first episode just aired this week, and you've been bumped up to a series regular. What can we expect to see out of David this season? ‍

AL: Well, I think we get to see a little bit more of David. You're going to get to see more about the relationship between David and Emily and what it means for him to have a kid now, especially in light of Mitch being gone. And his journey is about really figuring out what he really wants to do with his life and how he wants to spend his time and how important time is and how we have so little of it. And how to navigate that when you have a newborn and you have a wife who may disagree with you about how to spend that time. ‍

T: ‘Zoey's’ filmed over the fall, what sort of impact did COVID-19 have on production? ‍

AL: There's no COVID in the world of Zoey's, which is kind of nice because it's nice not to be thinking about that when you watch the show. But behind the scenes we get tested all the time and we wear masks all the time. The only thing that's really kind of unpleasant is dance rehearsals and masks because you're already struggling enough and you're out of breath and it's hard to breathe, but also the fact that the mask comes right below your eyes, it always feels like there's something around you. So it's just like an extra added challenge. If anything it's actually been a little more calm and peaceful because everybody's more focused, in a way, trying to get things done faster. There's not as many people crowded around, you can only go on the set if you really need to be there. Normally before every take, somebody from hair and makeup comes in and fixes you. And now it's like you try to do it before you get to the actual set. And then if there's a problem, you come in and fix it. But it's a lot fewer people around all the time, so it's just a sort of quieter atmosphere. ‍

T: Without spoiling anything, do you have a favorite moment with David in season two? ‍

AL: I always love when I get to duet a song, you know, that's always the most fun. So doing "Carry On" was really fun to watch how that evolved and how that came together, because it was in the script, and then we went to have a dance rehearsal and there was a little bit of like, "what are we trying to do here? What are we trying to say?" So the first rehearsal we didn't actually do that much because it wasn't totally clear yet. And then it sort of evolved and everybody collaborated, so to see that come together was pretty cool. And then I get to sing in episode four and episode seven. And those are songs I really love and they're really fun to do and challenging. I've gotten to do more scenes and little things with Skylar [Astin] and Alex [Newell] and things like that that I don't normally have any interaction with. And it's been really fun having a baby because the baby is really cute and it's really fun just to hold the baby and it kind of grounds you in the scenes because you have to actually take care of that baby. Like, I am really worried about if I'm going to hurt the baby, or if the baby's crying, so it kind of adds a nice sense of reality, sort of forces you to just be really dropped in. And then any time I get to do a scene with Jane [Levy], it's just so much fun for me. And same thing with Mary [Steenburgen]. But like I love doing a one on one scene with Jane, we just have a lot of fun together. And then last season definitely being a part of American Pie was really great and fun. And I would say my other favorite moment was getting to do "Good Night, My Angel" with Peter [Gallagher] at the end of the season, it was just genuinely sad to see him go because we became very close and he's such a great guy and such a great actor. And when I was 13 I did this show Falsettos on Broadway and in the theater next door, he was doing Guys and Dolls. And so Peter Gallagher was this big famous theater star to me. So to get to then sing a duet with him is pretty exciting. So that was a pretty special moment for me. I also am a huge Billy Joel fan. The first concert I went to when I was three was Billy Joel–and it's weird that I went to a concert when I was three, but I did. And I felt very lucky to have gotten that experience, like all the great things that I love colliding. ‍

T: And you do have an interesting theatre background, between Falsettos, Teddy & Alice, the national tour of Les Miserables. What moments from that time in your life still stand out to you? ‍

AL: I've been very, very lucky. One of the one of the really cool things was that Chip Zien, who I was in Falsettos with, is going to be in this season of Zoey's. They were looking for somebody for that role, and I was like "what about Chip?" Luckily he was willing to come out here and quarantine and he was such a great sport. I actually saw the episode last night and he's so great in it. So that was really just a fun thing to be able to work with him as an adult and to be able to say to Austin [Winsberg] "you should hire Chip" and then he got hiredl. But I'd say I feel very lucky because I think I think Les Mis and Falsettos are two of the best pieces of theatre, in my opinion. The staging and everything in the original Les Mis is I think, perfection. And the original casting of Les Mis was iconic and perfect. Maybe it's because it's such a big show and it's such an epic thing and everybody's sort of working together. There's this real sense of camaraderie and feeling like we are part of something that was bigger than who we were. And there's such a beautiful message in the show. And also for me getting to travel around the country with a bunch of twenty five year olds basically who all treated me like I was one of them, even though I wasn't. At the time a kid could go into a bar and it was fine. So at the end of every show at 11:30 at night, the adults would go out to a bar and I would go with them till 2:00 or 3:00 in the morning. So that's a pretty crazy fun experience. I wasn't drinking or anything, but still, it was just like a fun adventure. And I got to go to every museum in every amusement park in the country and it was incredible. Falsettos was equally as incredible, maybe more special in some ways, because that part is such an amazing part and I had been listening to those cast albums, I knew every single word of them. And I love the show so much. So getting to work with Chip Zien and Michael Rupert and Stephen Bogardus and Heather MacRae, who were all in the original versions of those shows when they were off-Broadway, that was just a really special thing. And I think the show is a really odd show, there's nothing really like it, and I find it very moving and funny and specific and original, and it's so rare to find an original musical that's not based on anything. Every experience that I've had in theater in New York was pretty incredible, I'd say!

This interview has been edited and condensed for clarity.