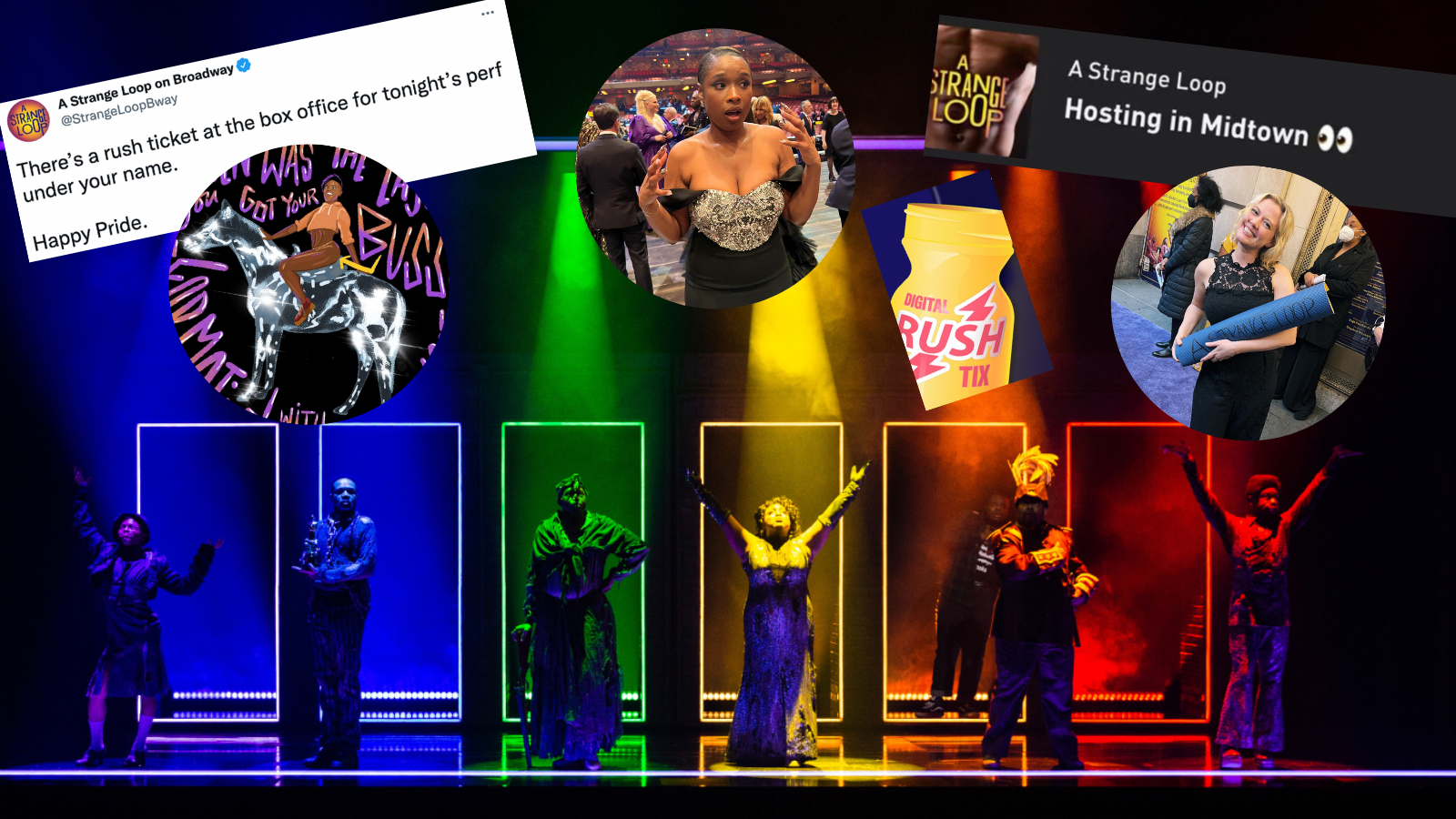 Over the past decade, social media has become a tool for fans and Broadway shows to interact with one another. More recently, productions have developed personalities that are true to the character of the show in posts and replies. Take, for example, the revival of Into the Woods, with its many Milky White puns. Funny Girl recently entered the chat by leaning into a meme of Lea Michele.

None, however, has captured the zeitgeist quite like A Strange Loop’s social team, which is run by the digital marketing agency RPM. To borrow a quote from Michael R. Jackson, it’s a “big, black, and queer ass”... Twitter, Instagram, and TikTok account. “In the cast, we refer to the audience as Thought #7 because of how important our relationship is with them. If that’s the case, I think our social media is Thought #8 in the wild multiverse of Usher’s brain,” says ASL cast member James Jackson, Jr., who appears in several posts.

To learn more, Theatrely reached out to the team and met RPM Social Media Manager Quincy Brown, who is one of a group of individuals planning the content. He knows how funny the accounts are and is well aware of the positive reaction.

“I think an important thing to remember when it comes to Broadway social media (and brand social media in general) is that you can only be as fun and fresh as your producing team allows you to be,” says Brown. “It’s always really hard for me to see people calling out brand social media accounts for not being ‘hip’ enough or staying up-to-date with the latest trends because it’s rarely at the sole discretion of the social media manager. Everything goes through a series of checks and balances…I’m very grateful to the A Strange Loop team for being willing to say ‘I don’t get it, but approved!’ to some of my more… outlandish ideas.”

Below, Brown dissects 9 of his favorite posts since the Tony-winning musical opened in April of this year.

The production decided to do a last-minute flash sale for $69 tickets during previews and we simply didn’t have enough time to put together a fully designed social asset. SO, I whipped out my phone, found this picture of June Jumbalaya… and put text over it using Instagram stories. My supervisor Caitlyn Gallip and I always like to say the tagline “this is Broadway” when we do something scrappy like this. This post worked because it’s an inside joke that the A Strange Loop audience would understand, but I also like to think of it as proof that not everything you post on social needs to be glossy and perfect.‍

I was gagged that we were getting the opportunity to run a REAL ad on REAL Grindr. We had a brainstorming session to figure out what we wanted the ad to be and I remember being SO nervous to suggest that we run with a torso picture and make the headline “[eyeball emoji] hosting in Midtown.” I thought for sure my colleagues would laugh me out of the meeting… Instead, my client director, Ryan Zatcoff laughed and said “let’s do it.” I love everything about this ad and… I hate to admit it, but it was very cool to see it pop up in my actual Grindr inbox :).‍

Bussy in Formation with Beyonce:

We had been working with this artist that we LOVE named Ryan Casey (check him out on IG, @drunkdrawn) to put together some illustrations based on A Strange Loop lyrics/quotes. I knew that the line that John-Michael Lyles says in the show “WHEN WAS THE LAST TIME YOU GOT YOUR BUSSY IN FORMATION WITH BEYONCÉ?!” HAD to be included. THEN, when Beyoncé released the album artwork for Renaissance, Caitlyn sent me the photo and said “...what if Ryan put JML on the disco horse?” The rest is history…

This post is the result of EVERYONE on the A Strange Loop team being brilliant at their job. I knew that we were announcing a digital rush and then one night… the idea came to me that we HAD to incorporate a RUSH poppers bottle somehow. The next day, I sketched a crappy wireframe of what I had in mind and briefed up the asset to send to our projects/design team to bring to life. The art director, Alex-Cruz Lebron, then came in and provided real direction based on the sketch I sent over. Our designer extraordinaire, Michael Gallucci KNOCKED.IT.OUT.OF.THE.PARK. The project managers on this post, Lisa Euker and Abby Doermann, kept this moving so smoothly that it literally only took one round of edits to have a final asset ready. Unheard of!

Coordinating TikTok captures with any cast is always an interesting process because it’s very hard to explain a vision for a TikTok without sounding INSANE. Luckily, the A Strange Loop cast has been very down to play with me whenever I send them my silly ideas. This show is particularly fun to plan content around because you get to do stuff like this that other, more traditional Broadway shows can’t necessarily do in an organic way. I have a lot of fun outtakes of the cast prancing down the hallway from this shoot.

My pride and joy. Going into Tonys night, I had a pretty good feeling that Jennifer Hudson was about to EGOT. I had been noodling around with some fun ways that we could acknowledge that moment on social, but never in my wildest dreams could have imagined that THIS would be how we did it. A stroke of divine intervention landed me on the stage of Radio City Music Hall with the rest of the A Strange Loop company after we won Best Musical and JHud was SHOOK to her core. This was a genuine reaction she had while we were talking and I whipped out my phone and said “HOLD THAT POSE!” Gold.

There’s a rush ticket at the box office for tonight’s perf under your name.

It was the first day of Pride month. I was feeling the Pride vibes. I happened to see this tweet as I was scrolling and thought “...Why not?” So I reached out to company management and explained the situation and how I thought it could be fun to save a rush ticket for this individual to commemorate the first day of Pride month and they agreed! How’s that for fostering community?‍

the NERVE to show up at our opening with stolen goods pic.twitter.com/noCp1FoTBC

Patti Murin doesn’t know this, but she was my first Glinda! The fact that I now get to have this online inside joke with her through A Strange Loop tickles me. In the early days of launching the account, our copywriter Rob Shapiro sent me a link to an old YouTube video where the ASL cast was discussing an inside joke they had where Patti Murin stole one of their yoga mats while they were rehearsing for the Playwrights Horizons run. I then took to Twitter to publicly call her out and she went ABOVE AND BEYOND with her response. Filming a video where she was sitting amongst our A Strange Loop stolen yoga mat, along with several other stolen yoga mats from various Broadway shows. Ever since then she has been a major part of the ASL social media universe. We wanted to continue the bit when opening night came around, so brought a “stolen yoga mat” for her to pose with on the carpet.

‍Inner White Girls after we had to cancel our first preview, twice:

So this was a genuinely stressful time for the production because we kept having to cancel our first preview performance due to COVID-19. As I recall, it happened once, it happened twice, and then when it happened for a third time I thought to myself “Okay we HAVE to acknowledge it at this point.” However, as I’m sure you can imagine, a funny meme was not really high priority for the production at that point in time. I reached out to one of the producers, essentially saying “Hi, I know you’re sooooo stressed rn, BUT I still think we can be fun and fresh on the internet… Can I post this?” And luckily, they loved it and approved right away.