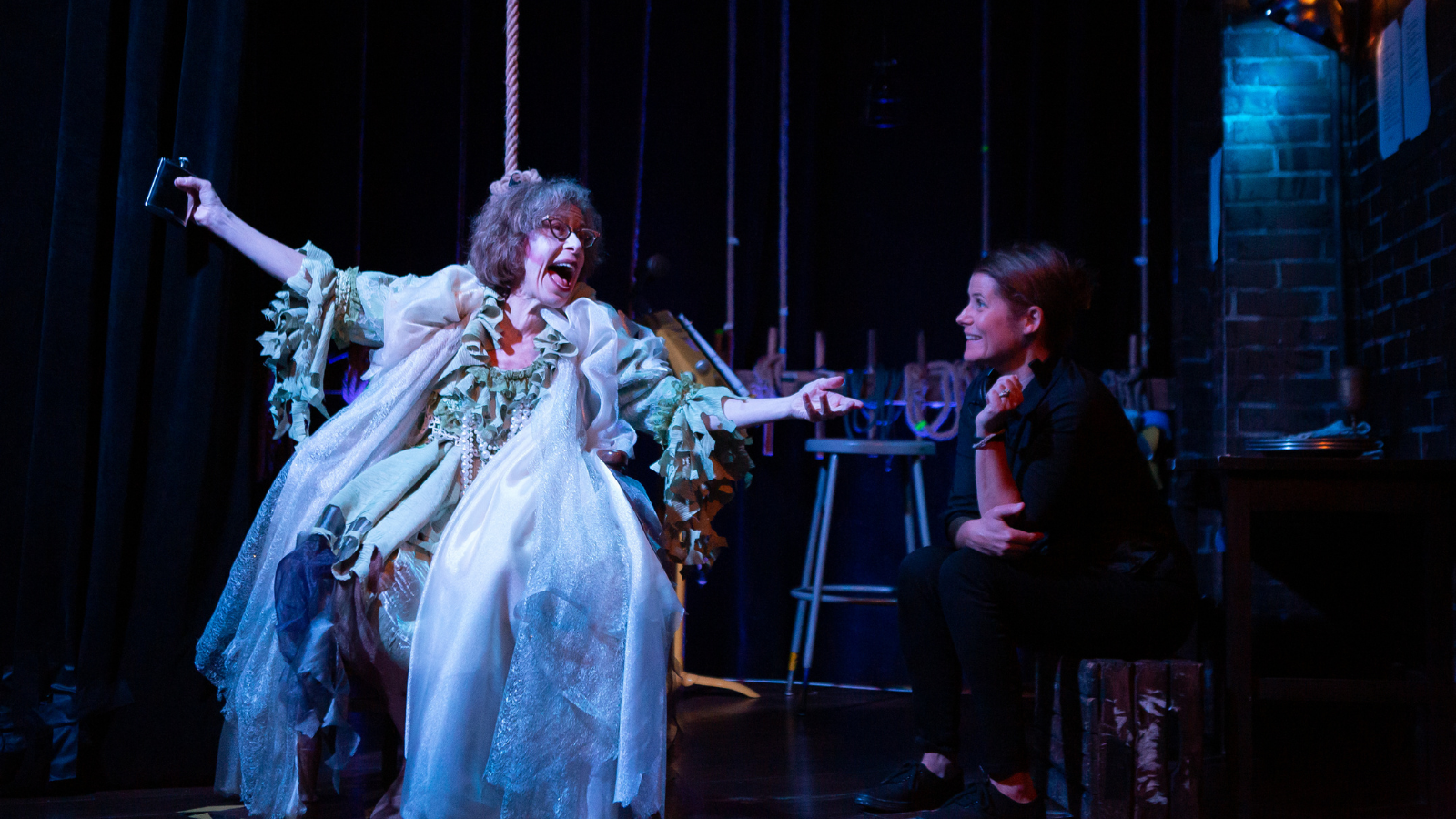 E. Dale Smith is a true theatre lover. The New Jersey playwright has had works produced around the country and is now back in New York with Fruma-Sarah (Waiting In The Wings), a comedic look at an aging community theater star waiting for her big entrance in Fiddler on the Roof.

On a recent Zoom call, I spoke with Smith about his career, developing plays throughout a pandemic, and just how dedicated theatrical comedian Jackie Hoffman truly is. At the star of our conversation, I noted my adoration for his Bernadette Peters in Hello Dolly t-shirt. He rolled up his sleeve to reveal Ms. Peter’s signature which has been tattooed on his forearm since meeting her at the stage door of Gypsy back in 2003.

Our conversation is edited for length and clarity.

When did you know you wanted to be a playwright?

Back in the 80s, being an only child in Texas definitely meant that you were spending a lot of time in your room without any kind of computer or technology to entertain you. I was always creating stories and I was always putting on shows for my parents and dragging my friends in to do the same — I think that's the genesis of it. When I was in undergrad, I was studying theater studies at University of Texas at Austin. And one thing, one of the elective courses we could take was playwriting. And I was like, that sounds interesting. And I loved it. And it just kind of went from there. I went into teaching high school, which I'm now about to start my 22nd year of doing. But when I was going to grad school, I knew as a theater teacher I could either study education, which would make me want to bang my head repeatedly into a brick wall, or I could continue to study something I loved.

Talk to me about conceiving the piece.

Braden [M. Burns, the director] and I have now collaborated on four different projects and over the years what we have learned is just how strong we are as a collaborative team. One day he just got this image of this woman, just stuck waiting to play Fruma-Sarah. This could be a very playwright thing to say but she wouldn't shut up in my head. I called him back the next weekend. I was like, yes, I need to put this person on paper — and I knew I wanted it to be grounded in community theatre, not the professional scene. I personally am involved in community and high school theater out here in Jersey where I live. And I've always been interested in the parts of theater that aren't as glamorous but still have a lot of meaning to a person.

Talk to me about crafting the play and challenges of doing so throughout the pandemic.

The challenges were pretty great, as you can imagine. I wrote the first draft of the play, which was significantly more of a monologue in 2018. It really came out of me very quickly. Arianna Rousseau, the woman playing Fruma-Sarah in my play, is really just speaking. So I started out by creating a very broad structure, which is a play told in seven movements. Each of the movements coincides with the song that's being performed on stage during Fiddler on the Roof. Maybe it gets to “Matchmaker” and that takes her story into her divorce or “Sabbath Prayer” takes our story into her relationship with her daughter.

And tell me how we got to today with performances at the cell.

Ron Lasko, one of our producers, saw a first reading and loved it, and immediately said “this needs to be done by Jackie Hoffman.” And I was like, “OK, I mean, I like won’t say no to that.” And so he took our play to the performance space, the cell, because he knew it would be a really good match. I started working with the artistic director, Kira Simring, and we had a reading for them and it went very well. And that was in February of 2020. And everything stopped. And, of course, like everyone else, we were like, OK, we're taking a three week break. I reached out to Kira in mid-April and I said this doesn't involve a lot of movement. Can we workshop this through readings on Zoom? I think the pandemic actually enhanced the play a great deal because everyone involved had a much better understanding of what it meant to be stuck. So through Zoom, it actually had a different resonance because everyone was immobile, essentially.

Are you a big Fiddler on the Roof fan?

Oh, I've always liked Fiddler on the Roof. I've seen a couple of productions, so I was very familiar with it but I didn't dig too deeply into it because one of the things about Arianna is that she's actually Italian and not Jewish. It's not part of her culture. It's part of our culture in that she loves musical theater, but she doesn't relate to it in the same way. So I didn't go really deeply into the relevance and significance of the 1964 production on Broadway. I took it more as what does this 58-year-old woman living in New Jersey who loves musicals know.

Do you personally have a favorite Fruma-Sarah performance you have seen over the years?

When I saw the Yiddish production a few years back, the woman who performed her was terrifying, so that was a good one. The other week, Carol Sawyer, who originated the role in 1964 came in and her little 92-year-old feisty self regaled us with stories from the three years she spent in the production — so she definitely shot up my list.

I would be remiss if I didn't thank Jackie Hoffman, who read this play and for whatever reason decided she would take a risk on an unknown playwright working with an unknown director. I love the amount of work that she's put into getting us out there and celebrating and supporting this piece. I couldn't ask for a better person to have taken this role! And what we're so excited about is that she is committed to the play. Both of the cast members are — Kelly Kinsella, I think is a beautiful Margo. They're both very dedicated to working with the piece as their schedules allow, as we move forward into next steps and making it all the better.

Do you have a favorite joke in the script?

Yeah, there's different ones that I love for different audiences. I happen to be very partial because when it happened and I wrote it, I laughed out loud. There’s a line where the director in the play is talking about their upcoming season and it includes an all-female Equus and an all-male The Children’s Hour.

Has Jackie put her personal spin on the piece at all?

I think that she has most influenced it through her rehearsals and her deliveries. If you write a joke and it's not funny when Jackie Hoffman says it, it's not funny. I loved our first rehearsal, she was like, “I'm going to learn all these lines. And if not, it's OK. I have a lot of experience in improv.” That's what every playwright wants to hear from their lead!

Fruma-Sarah (Waiting In The Wings) concludes its sold out run at the cell on July 25. To learn more about E. Dale Smith and his upcoming projects, click here.