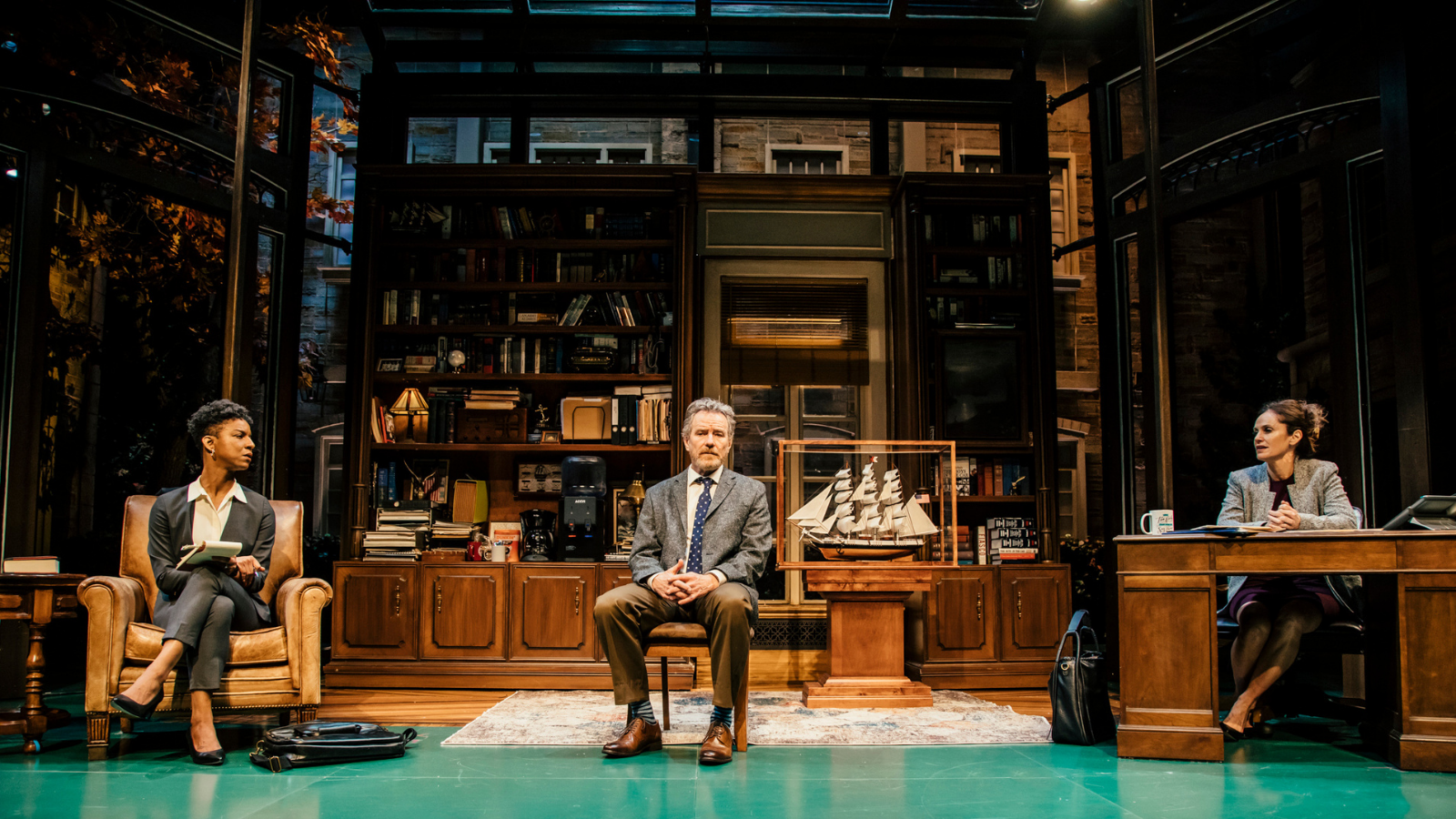 This nautical rule, quoted by Professor Charles Nichols (Bryan Cranston), sets the tone for much of Power of Sail, a new play by Paul Grellong, which received its west coast premiere last Thursday night at the Geffen Playhouse.

Power of Sail takes place, non-linearly, over the course of about 24 hours in and around Cambridge, MA. It centers around Nichols, a Harvard history professor who invited a white supremacist to speak at an upcoming symposium, and the havoc that decision has wreaked on Harvard’s campus. Before the play even begins, the audience hears shouts of protesters demanding that Nichols uninvite the speaker. Once the lights come up, we see Nichols in his office, beginning to come to terms with his student body’s reaction to the leaked speaker list. The real crux begins to show itself when the white supremacist asks Nichols to his compound and Nichols accepts the invitation, accompanied by Lucas, one of his grad students (Seth Numrich).

Shouldering most of the burden in this play is Cranston, who is on stage through the majority of the action. With a range that fans of his stage work are likely accustomed to, he deftly maneuvers through the character’s emotional turmoil while maintaining deep secrets that the play’s other characters must elicit. Cranston elucidates the material in a way that only a veteran like himself can, bringing out the best from the script and focusing the audience’s attention on the play’s critical elements.

Nichols’ primary sparring partners are Amy Katz (Amy Brenneman), a Harvard Dean who appears sympathetic to his plight, and Baxter Forrest (Brandon Scott), a former student who is now a hotshot professor and firmly against the invitation. Rounding out the cast are Donna Simone Johnson, who plays a probing FBI agent, Tedra Millan, as a scheming grad student, and Hugo Armstrong, an affable bartender. The uniformly strong cast plays on one another to elicit the most they can from the text.

This production was deftly directed by Weyni Mengesha, the artistic director at Toronto’s Soulpepper Theatre. The versatile set was done by Rachel Myers, whose turntable indicated the passage of time, both forward and backward. The evocative lighting was designed by Lap Chi Chu.

Ultimately, this is a timely and relevant play, whose importance is only underscored by the superb acting from Cranston and his cast. Cranston’s vivid portrayal is reason alone to see this show; he proves once again to be a master of his craft, and should not be missed.

Power of Sail runs at the Geffen Playhouse through March 20. For tickets and more information, visit here.