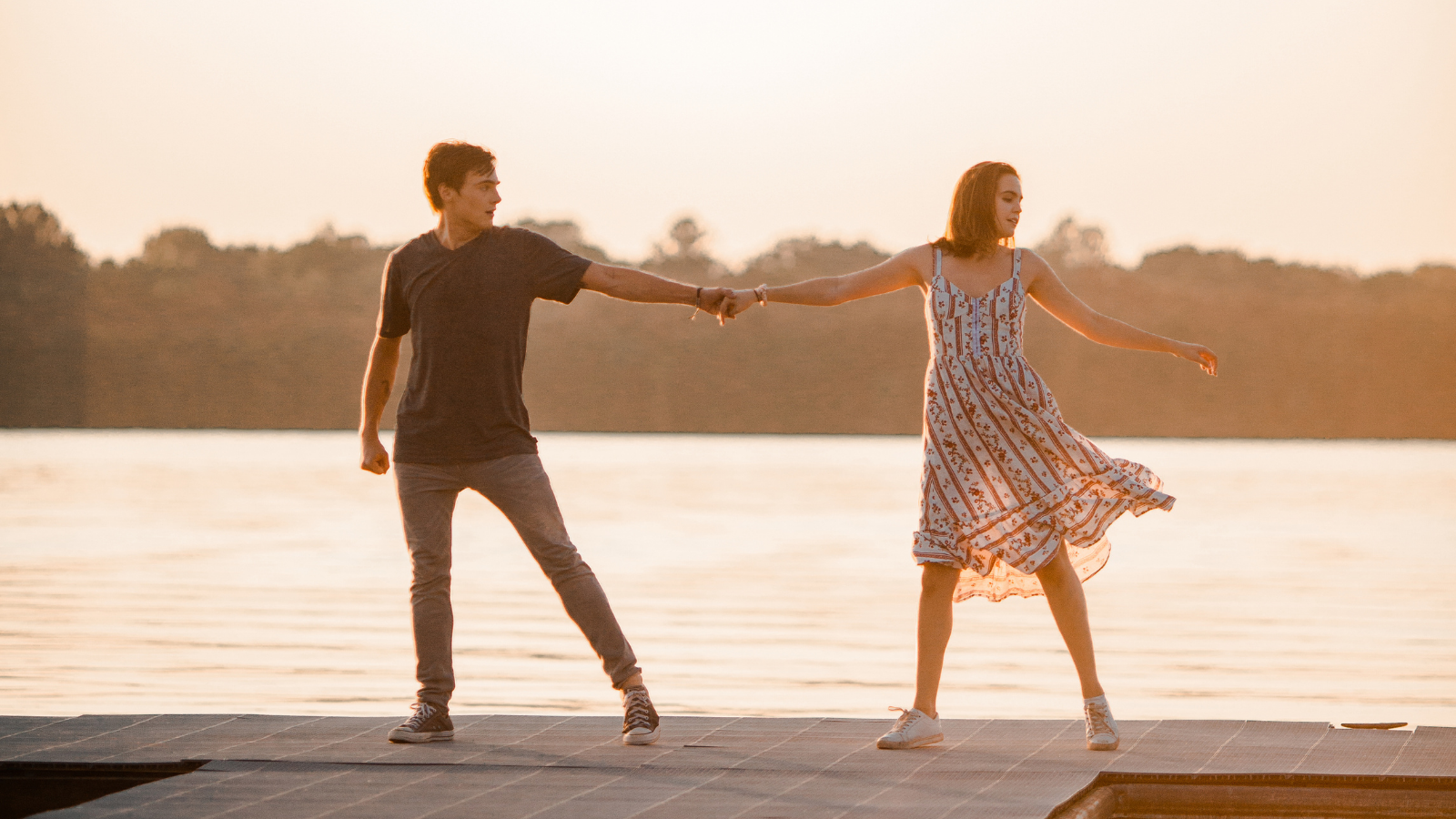 Kevin Quinn and Bailee Madison in A WEEK AWAY | Photo: Richard Peterson/Netflix
By
Juan A. Ramirez
No items found.
on
Category:
Features

A Week Away, Netflix’s newest movie musical, follows a familiar blueprint: two teens from different worlds meet over one fateful summer and change each other in ways that will last long after the school bells start ringing. It’s a tried-and-true story that works only if its leads, here played by Bailee Madison and Kevin Quinn, strike the right chemistry––something they’d inadvertently been working on since they were starting out as teens in the industry.

“Kevin was on one of the hit Disney shows and my friend Peyton [Dix] was on that show as well,” Madison said on a recent Zoom call, referencing Bunk’d, a Disney Channel series which premiered in 2015. “I went to visit her set one day and Kevin was there. We were a small group of kids who were all doing similar things, so we would always pass by each other all the time.”

While both starred in Disney Channel series––Madison had appeared in Wizards of Waverly Place and Cory in the House––as well as different Adam Sandler films, the two had almost parallel careers, with Quinn’s following a more musical path.

“I had done musical theater growing up, so this was really just performing for a camera as opposed to a live audience,” Quinn said. “It had been a while [since I’d done musical theatre], but I did a musically-oriented film for the Hallmark Channel, A Christmas Love Story, where I sang with Kristin Chenoweth.”

Despite the distinct lack of Chenoweth in her past, Madison cut her musical teeth appearing in friends’ music videos, including Meghan Trainor’s “All the Ways”.

“Music entered my life at the top of 2019 stronger than it ever had,” she said. “I was constantly finding myself with people who were writing music, and my dear friend Meghan Trainor asked me if I'd be in her music video and fall in love with a giant teddy bear. That was my first experience and I loved that, so they were great support, and a lifeline for me when it came to any questions that I had on the film.”

That experience proved handy while working on A Week Away, which is directed by Roman White. An established music video director, White has worked with Justin Bieber, Kelly Clarkson and, most famously, on Carrie Underwood’s iconic “Before He Cheats” and Taylor Swift’s “You Belong with Me”.

“I was a fan of his before stepping on that set, I had goosebumps!” Madison said. “So many of his music videos are so iconic in so many lives, and especially in my life. But especially when it came down to the music-–because this was such unknown territory for me––I did feel like I was in trusted hands.”

“Really, it felt like we intercut a bunch of separate music videos into one cohesive story,” Quinn said. “That's the coolest part about this film, is that every one of those music videos was a blast. I think Roman is an actors’ director, and I can just recount hours discussing creatively with him. “

This emphasis on performers’ personalities––perhaps what has made White so successful a music video director––helped Quinn get into a character who is introduced at a low point in life.

“I tried to just find the layers of the character, what was going through his head as he was singing in these moments,” he said. “He really helped me find those layers that I so desperately wanted to find with this character. Although he does come from a music video background, I feel like we're just scratching the surface with his capabilities.”

Post-production proved its own set of challenges once the COVID-19 pandemic shook up the film world. The film, which wrapped up during the summer of 2019, found itself with a delayed release.

“I was fortunate enough to have been able to step in as a co-producer,” Madison said. “So the waiting period for me, as someone who likes to know everything that's going on... I was grateful to be in that role, because I think I would have lost my mind.”

Madison and Quinn said that, though the pandemic cast doubts as to how the film would be released, the cast’s active group chat and eventual Netflix distribution deal smoothed over lingering concerns.

“This movie would have come out sooner if it were not for the pandemic,” Quinn said. “ I know that the producers had discussed theatrical distribution and, while that would have been great, I just don't think any other partner could have been Netflix. This is the kind of movie that kids want to watch over and over again, and we want to encourage them to do that.”

“A Week Away” is now streaming on Netflix. For more information, visit here.