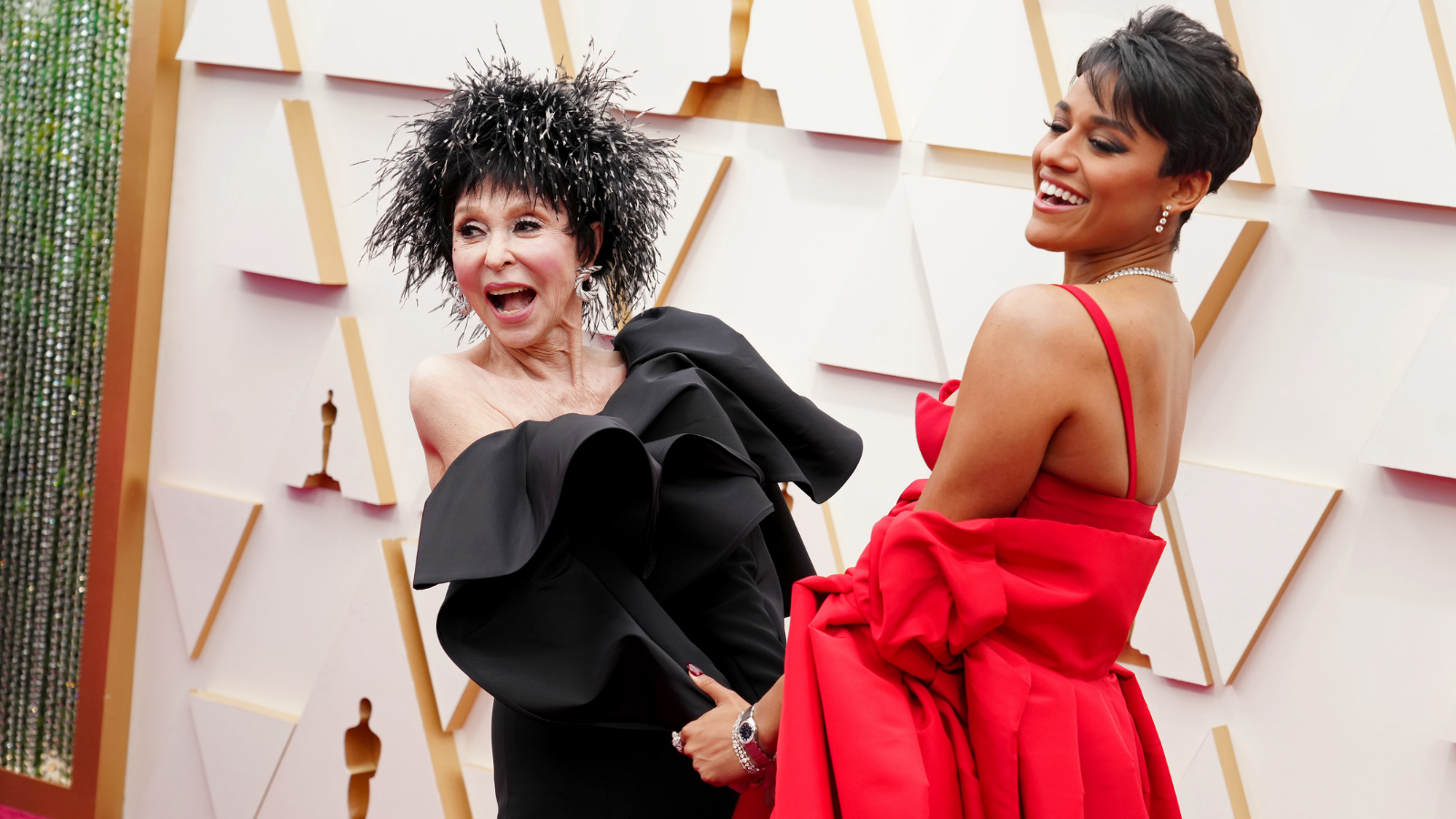 By
Jake Sokoloff
No items found.
on
Category:
Features

Some people say that the Oscars red carpet is the grand finale of award season, even if we all secretly know that it’s the lead up to the Tonys. From Disney’s West Side Story to Netflix’s tick, tick…BOOM!, movie musicals are continuing to take center stage in Hollywood, allowing theatre performers to become stars of the screen. Lucky for us, that means there was no shortage of Broadway talent walking the red carpet at this year’s Academy Awards. Below we break down some of the night’s most memorable looks from some of theatre’s brightest stars.‍

‍Even at 90 years old, Rita Moreno still knows how to stop the show. Her sleek, black Carolina Herrera gown featured sculptural sleeves, an element we have seen in several of her other looks this season. The real standout of the look was a whimsical feathered headpiece made for her by hat designer Adrienne Landau.

‍Andrew Garfield has charmed on many red carpets recently, most often seen in bold double breasted suits of various fits, fabrics, and colors. His final look of the season was a purple velvet custom Yves Saint Laurent tuxedo. His silk black shirt and bow in place of a tie offered a whimsical twist to this masculine look.

Halle Bailey stunned in a bright turquoise Roberto Cavalli dress. The silhouette felt like an ode to the character she will play in the upcoming live-action remake of Disney’s The Little Mermaid, with a one shoulder bra top and flowing skirt.

Ariana DeBose's red carpet journey through this year’s award season has seamlessly blended a variety of styles. Her choice of gender-neutral looks allowed both the masculine and feminine to be showcased. Tonight, we saw this culminate in the ultimate Oscar’s power look: custom red Valentino haute couture. A masculine trouser paired with a feminine bralet and dramatic cape was the perfect ensemble to accept her first Oscar in.

‍Timotheé Chalamet has always embraced risk with his fashion on the red carpet. This year, he wore a sequined black suit by Louis Vuitton straight from the Spring 2022 Womenswear collection. He chose to skip the shirt, instead accessorizing his two-piece ensemble with jewels from Cartier.

‍Paloma Garcia Lee made her Oscars debut wearing custom Patrick McDowell. This dress is ethical and eco-responsible, with a silhouette that embodies Hollywood glamour with a modern edge.

Amy Forsyth was a standout on the carpet in a glamorous gown by Marchesa. The structural details complimented a full skirt and thigh-high slit, adding a sexy peek of skin to a classic Hollywood moment. Amy paired her red dress with a red lip and simple red sandal to match.

‍Maddie Ziegler stepped onto her first Oscars red carpet looking flawless in a strapless black Giambattista Valli gown, and accented with Swarovski diamonds. She looked mature and elevated, like a true star.

‍Jessie Buckley looked flawless in a minimalistic dress by Erdem. The fluid satin fabric hugged her body and flowed to a full skirt that pooled at her feet. She accessorized the look with stunning Chopard earrings.

‍Rachel Zegler has been a staple on the red carpet this year, donning Christian Dior several times this season, and tonight was no exception. Even with short notice, Christian Dior Couture still had time to whip up this custom black and beaded sheer gown for her and it did not disappoint.

Jake Sokoloff is a freelance fashion stylist based in New York City. In 2015 he founded STYLE BY SOKOLOFF, and has been dressing Broadway talent for editorials, concerts and red carpet appearances ever since. He lives on the Upper East Side with his fiancé and their cat, Freddie Purrcury.