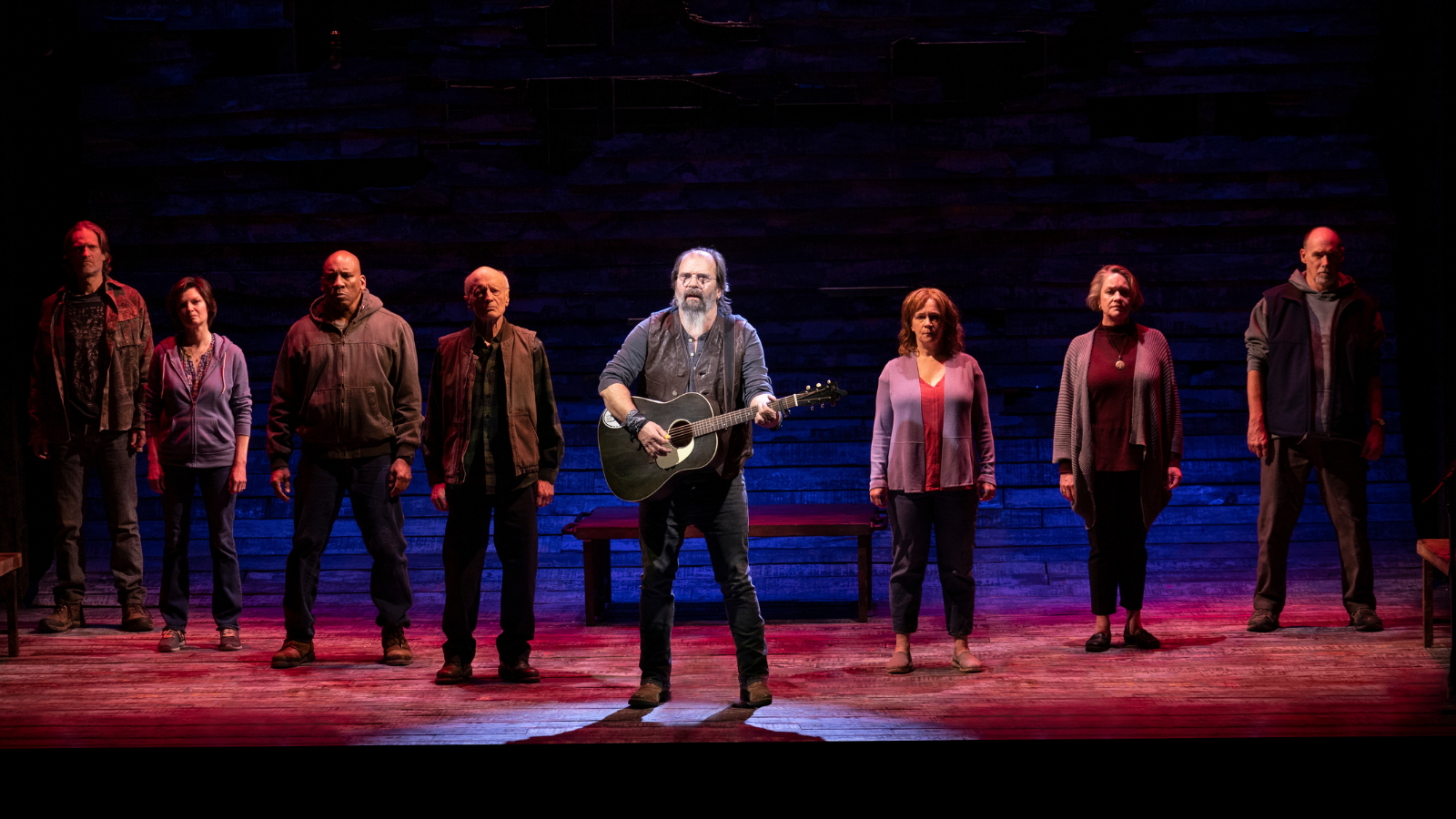 There is something that feels very inauthentic about Coal Country —  a musical by Jessica Blank and Erik Jensen, with original music by Steve Earle — which just opened at the Cherry Lane Theatre after its original 2020 run at the Public Theater (which here co-produces with Audible) was cut short by the pandemic. Not so much a musical as a one-act documentary play with the occasional sung interlude, soulfully performed by Earle himself, it presents a group of eight people affected by a coal dust explosion which killed 29 people at West Virginia’s Upper Big Branch Mine in 2010.

The disaster, it is made clear early on, was entirely preventable by the mining company’s bosses, who left the situation relatively unscathed. On Richard Hoover’s bare, wood-paneled set, the show follows the hours, then days, then weeks after the explosion, as the townspeople — all of whom rely on the mines as the town’s main source of income — grow disheartened and angry at the employer they’d come to think of as family.

Though assembled from interviews Blank (who also directs) and Jensen conducted with friends, families, and coworkers of the deceased, it can’t shake off the same North-South condescension that plagues so many works about the American South. It does not mock —  after the 2016 Presidential election, we seem to have moved past mockery and insist on granting (gasp!) humanity, as if such things can be bestowed. But, like the similarly icky 2020 film Hillbilly Elegy, it can’t help itself from presenting everyone involved with an air of, “Look, they’re people too! Nevermind their possibly different political leanings, Southerners are just as valid as others!”

Questions of authorship and of who gets to tell a story have been around almost as long as the field of ethnography itself — hell, there’s a whole ‘nother Public Theater-incubated musical up at the Richard Rodgers that (purports to) deal with this issue. Depending on how radical a person you ask, the act of putting pen to paper when the tale is not yours will always involve a degree of violence, but these matters are often laid to rest through charm, poignancy, or a particular angle accentuating the reality. Here, as we listen to graphic descriptions of mangled corpses and grieving mothers, it feels unearned and pornographic.

The often affecting cast includes Mary Bacon, Amelia Campbell, Kym Gomes, Ezra Knight, Thomas Kopache, Michael Laurence, Deirdre Madigan, and Carl Palmer, but Jensen’s direction enforces a flat, presentational affect on all of them, stamping out most hints of personality in favor of the piece’s insistence on taking these people as one body, one community. What should have been a cathartic call to revolutionary action, a solemn ode to these victims of capitalist negligence, feels like an exercise in Liberal tearjerking.‍

Coal Country is in performance through April 17, 2022 at the Cherry Lane Theatre on Commerce Street in New York City. For tickets and more information, visit here.