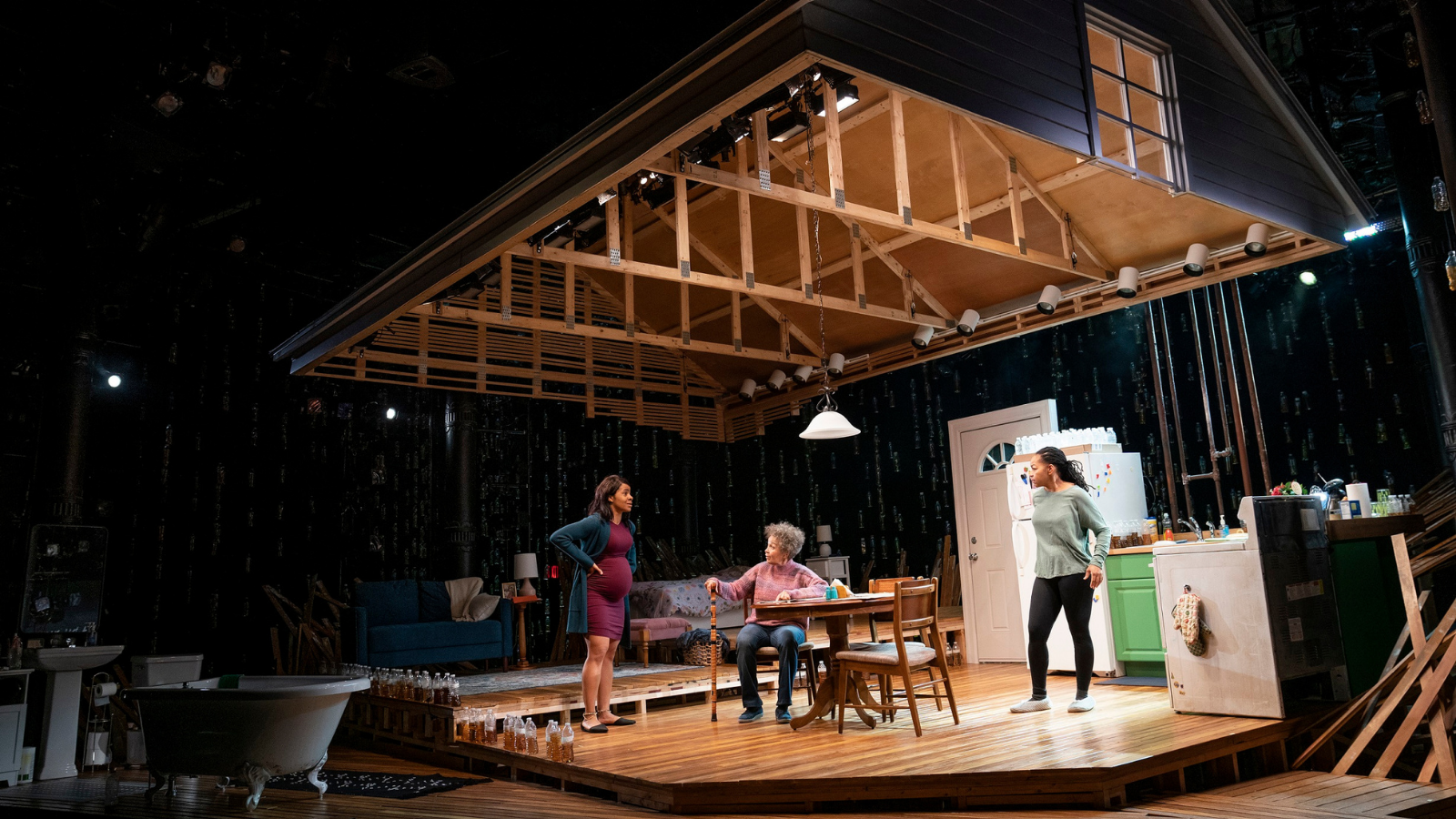 Erika Dickerson-Despenza, the writer of Cullud Wattah, a magnificent new play which just opened at the Public Theater, calls herself a ‘cultural-memory worker.’ I’d usually bristle at the self-proclaimed title, so vague in its implications, but anyone who can follow the stunning shadow/land—the first installment in her epic 10-play “Katrina cycle,” released as an audio production by the Public earlier this year—with a work of such breathtaking beauty can do just about anything, including convincing me of their title. Because, while Dickerson-Despenza is a playwright of the once-in-a-generation kind, these two works assert her mastery at combining the intimate family histories of classic memory plays with the political sharpness of an agile social worker.

Wattah is not part of her “Katrina cycle,” but it similarly deals with a tight-knit family of Black women struggling with that most sacred of elements, water, turned against them by a hostile government. Set in Flint, MI in November of 2016, it concerns Marion (Crystal Dickinson), a third-generation General Motors employee, and the two generations which surround her. Working at the factory is grueling enough, and the years of lacking clean water only make matters worse. The lethal combination has already taken out her father and her husband, permanently disabled Big Ma (Lizan Mitchell), and medically affected both sister Ainee (Andrea Patterson), and daughters Reesee (Lauren F. Walker) and Plum (Alicia Pilgrim), who suffers from leukemia.

Candis C. Jones directs this heady work in a manner elegant in its magical realism, and grounded in her attention to the talented cast, which turn in equally affecting performances. Reflective of the playwright’s genuine care for her characters, she writes each one to be as indispensable to the drama as they are to each other. With these fully realized women, to go into their individual ails, dreams, and woes is to unravel the tight thread work that the play so carefully and beautifully weaves and undoes throughout.

Dickerson-Despenza’s play is striking in its combination of the personal, familial, and political—creating a context in which each sphere is inextricable from the other. Steeped as deeply in Yoruba ideologies as it is in current governmental ills—the women chant “Snyder’s playing god with water,” referencing the former mayor of Michigan while invoking the supernatural strength of a disenfranchised community’s resilience.

The production evades claustrophobia through Adam Rigg’s gorgeous scenic design, which views the family home as an ark, elevated from the floor and with wooden slats splintering outward. Brown-water bottles line the floors and tables, and float like tainted raindrops around them, where they are strung up and beautifully lit by Jeanette Oi-Suk Yew. Tallies marked on the chalkboard walls that envelop the seats extend the onstage tragedy out into the audience, reminding us of the unforgivable number of days, still ongoing, that Flint has gone without clean water. Sinan Refik Zafr’s sound design is equally terrific, remixing apocalyptic broadcast announcements with ominous sounds of burbling and fatal submersion.

It is unclear when Dickerson-Despenza’s “Katrina cycle” will continue, or if it will comprise the rest of her immediate output. I’ll admit to an initial disappointment at the discovery that Cullud Wattah was not the second play in the project, but that was washed away seconds into this production—surely one of the best of the season.

Cullud Wattah is now in performance at The Public’s Martinson Hall through December 12, 2021. For tickets and more information, visit here.