Daniel K. Isaac Leaves Us Parched With Thirst Traps For a Good Cause (And Ticket Sales) 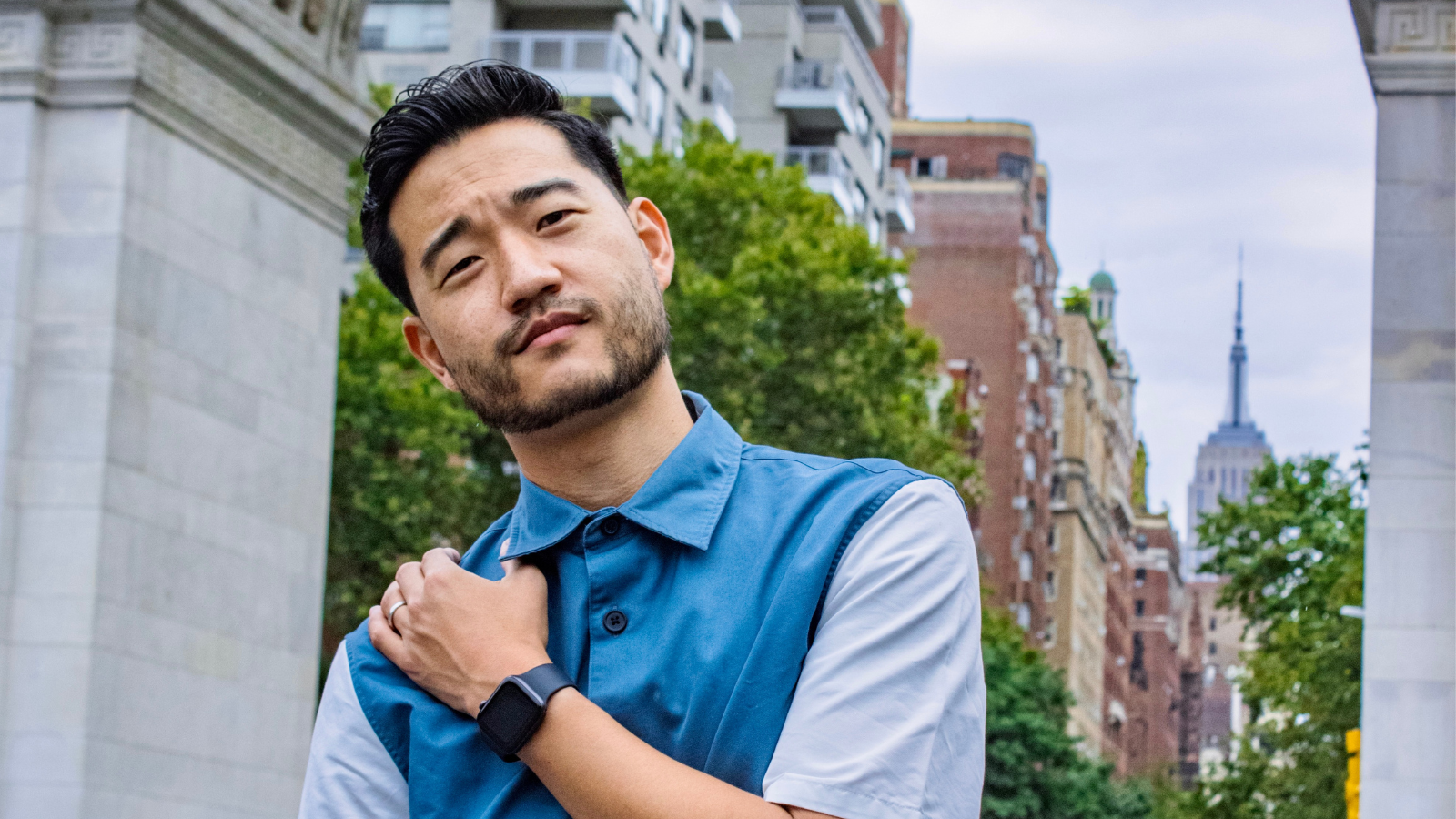 It’s been an hour since actor-playwright Daniel K. Isaac has arrived at Washington Square Park. After a photo shoot, several mosquito bites (thank god he brought Cortisone) and reminiscing about our respective days as an Eagle Scout (we both quit after reaching the highest rank because…gay stuff), I finally get to the question I’ve been dying to ask him: Are the thirst traps working?

Over the last few years, Isaac has posted several shirtless Instagram selfies to promote a good cause in the past: the NYC Marathon charity he ran for, a beat cancer fundraiser, and even a celebration of his run in The Chinese Lady. “Taste the Atung,” he captions, looking seductively in the mirror.

This time around, though, Isaac’s cause is selling tickets for his NYC playwriting debut. Once Upon A (korean) Time is now in previews at La Mama Experimental Theatre, and will open August 31. The Ma-Yi Theater Company production is directed by Ralph B. Peña, who joked to Isaac that they should create a reverse fundraising thermometer. As ticket sales rise, they can remove a piece of clothing off of a poster of Daniel—that’s how popular he is.

Using sly, sexy humor, Isaac has posted at least two shirtless photos, so far, to boost sales. One is reminiscent of those NYC Marathon training posts; the other is not a selfie, but a dudeoir portrait by Emil Cohen of Isaac getting dressed on the edge of his bed.

“I used to really feel insecure about how scrawny I was,” says Isaac. “[I wasn’t] the buff, built jock that I think parts of our gay community might still prize.” After entering his mid-20’s, though, the writer-performer decided to be thankful for whatever body he had. “It can literally change on you or it can be taken away, and so that helped me look at ‘thirst traps,’ differently.” He even looked to queer fiction to solidify his view. Somewhere, he read that the concept of youth is wasted on the young. “An older character tells a younger character, ‘You’re never going to appreciate the body you had [back] then’...and I felt that perspective.”

The star has already encountered a few milestones that have marked his journey. “Last year, I trained for the marathon. So, I think that also changed my conception of my body and what I was able to push my body to do.” Plus, it helped that the show that gave him his big break, Billions on Showtime, made him take his shirt off with practically zero notice in the winter. “I thought, well, if you can take your shirt off for cable television and strip tease with Damian Lewis and David Costabile and random other actors in an elevator, you can just own whatever state you’re in.”

There’s an ulterior motive, too, beyond fundraising or selling tickets: reversing the de-sexualization of Asian men in America. “If I have some political bent, it is to say, ‘We have sexuality and agency and can be sexual.’” And so, since Instagram tells Isaac that many of his followers are men of a certain age who also like men, he posts the thirst traps for those who will double-tap the post—and more importantly, buy tickets to see Once Upon A (korean) Time.

He’s not the only playwright to do that, either. Johnny G. Lloyd, whose play Patience is currently scheduled to run at Second Stage Uptown through August 28, has also posted shirtless mirror selfies to gain traction.

“We were joking with each other because this is both of our playwriting debuts in the city, asking ‘Does [posting] work? I hope it works.’ It seems to work. What do you have to lose?” And if someone doesn’t like it or loses respect, Isaac doesn’t care. “They’re probably not the audience I want for my show.”

Ultimately, Isaac says, he’ll do whatever it takes. Not only because Once Upon A (korean) Time is his NYC debut, but also because he wants to support the team that’s lifting up his play. “I care about Ma-Yi a lot for being an Asian American theatre company that only does new works.” Being a small company is already up against a lot: Broadway, TV, film, to name a few. “I wonder if people are still hesitant to go to the theater,” adds Isaac. “I want to help shine a light on this company, these people, and this team. So, yah, I’ll get naked for them, it's fine.”

Of course this is all moot without a piece of art to present. Isaac began writing a while back after a few text messages with his mother went viral and launched According to My Mother. A TV pilot project for that blossomed and is still in development. “I knew that I wanted to keep writing and that the medium of film and TV felt slow for me, which is ironic, because the theatre producing pipeline can also be incredibly slow but I love the medium.” For Isaac, stage work inspires a more in-depth conversation than the screen—and that goes for reading as well (hence his #DKIReads book club on Instagram).

That’s why Once Upon A (korean) Time is inspired by the genre of Korean folk tales and fairy tales. Growing up in southern California as the only son of a single immigrant mother with little money meant a lot of his escapes were found in the library. When thinking about where to begin with his play, he realized there was a lot of Western influence on his mind—from Chekhov to Marvel—but very little of his own heritage. “I was going to children’s books again to learn about fairy tales and folk tales so as to figure out something about my motherland.”

Thankfully, memories of going to a “homemade Korean school,” in his words, led him to rediscover exactly what he needed. Similar to the Brothers Grimm, these East Asian stories have a more gruesome bent. “Depending on the storyteller, they have a weird sense of humor, which I felt very aligned with,” Isaac adds. “So, I’m hoping to capture some of that...and fear that it will tonally be so jarring for some people. [laughs] We’ll see if it works or not.”

Isaac tells me that he’s a bit nervous tackling the genre, worrying that he doesn’t have a full grasp on these tales. That’s almost besides the point, though, as his goal is to share a new story via this rich oral history tradition.  “[The stories shift] as they’re told from person to person. Some my mom told me, some I found from books, and some I interviewed Koreans and Korean Americans and asked them to recite their favorite stories to me. And all of that lives in the DNA of the play now.”

In addition to the storytelling framework inspiration, Isaac says he wants to inspire audience members to leave the theatre questioning what aspects of history they know—and go searching for answers about what they don’t. “I think I bit off so much in trying to do this play,” he says with a laugh, adding that he and director Peña emphasize that this will not be a history lesson. “America’s involvement in Asia… is really complicit with violence and trauma. It’s a sort of historical meddling, which we understand but I don't think we talk about. [Continuing] to question that might be an ulterior motive of mine. What I hope [audiences] take away is more about storytelling, family, resilience, and hope in the face of extreme darkness or hopelessness. And I think we could all use a little bit more light in our lives right now.”

The play follows multiple generations of a Korean family dealing with myriad traumatic events. “It’s generations of people passing down stories…that family tree is fabricated, though I guess partially inspired [by the fact that] I never had grandparents growing up; they all passed before I was born. I don’t know my father or his side of the family.” There’s a void that most people have the privilege of experiencing, so Isaac is summoning a family tree on stage to recreate what he missed in his own life.

Don’t feel bad for him, though. “I ultimately care about my chosen family,” he says. Isaac recently held a commitment ceremony with his life partner Chad Reed in Provincetown, surrounded by his closest friends and a few family members. “If I have a thesis in life, which comes back to this play, too, then... I think you have to create your family wherever you go….To have all these people come from around the world and spend all this money and time, for this act, felt very mind-blowing and something I can never repay. I have trouble articulating how grateful I am for it, but it was special.”

That level of gratitude is something he is sharing with his Once Upon A (korean) Time cohort as well. It’s a big ask of any director and design team to tackle a new work, especially when it’s being given a full production. “I’ve been in workshops and readings and developmental stages for this piece and other plays for a while, but it’s totally different [now]. I’m constantly in awe that all of these people came together and said ‘yes’ to my play, my little thing—or really, it’s epic, impossible, jarring and all over the place. [It’s a] beast of a story, and they said ‘yes!’”

Still, battling imposter syndrome isn’t easy, so there’s a constant question of “Do I belong here?” and accepting a certain relinquishing of control that all playwrights face ahead of opening night. “I do feel the most vulnerable doing this than I have [before]....You know, if someone said ‘go be naked on stage’ or to do an embarrassing thing for television, that doesn’t bother me as much as this thing that is fiction that I'm putting out in the world.”

Despite the feeling of vulnerability, that collaboration is still his favorite thing to do—it’s what he loves most about the theatre. For example, he writes crazy set design directions and lets someone else make them up.

As for what’s next, Isaac says he doesn’t have a star-on-the-rise mentality—he’s focused on providing for his family, chosen and biological, and perhaps saving up to have a child. “There are so many people in this city that I love and admire and no one knows their names. I’ve watched them work and I think, ‘This is a hard hustle, you’ve been doing it for decades, you’ve raised a family, you have a place in the city…how incredible!’ I set that as my barometer because I want to be in this city for a long time.”

Whatever comes next, he’s got a legion of fans waiting for him, whether he wants to think about his fame or not. They’ll be ready for the next project, the next performance, and of course, the next thirst trap.