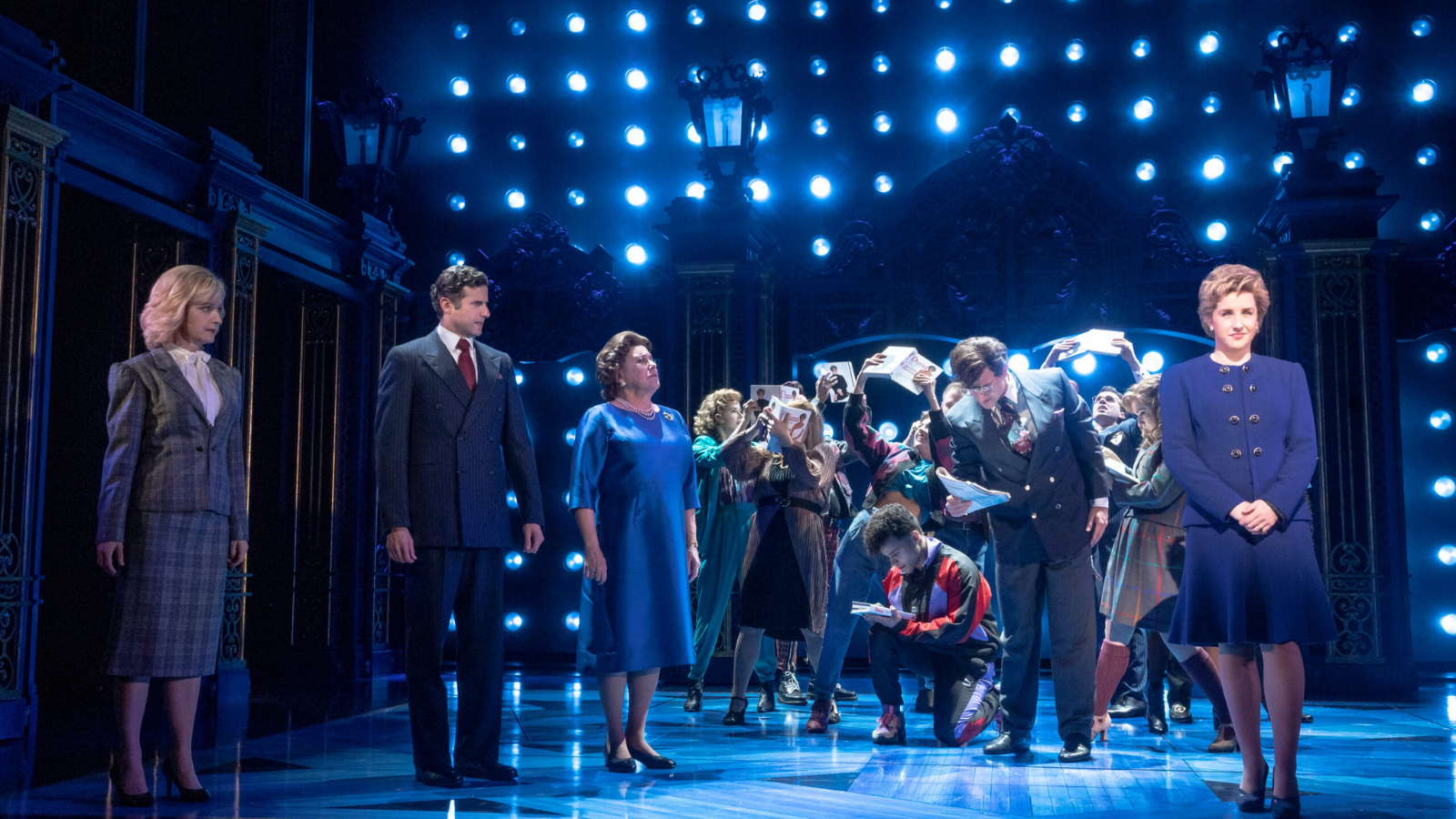 The company of Diana, The Musical | Photo: Matthew Murphy

I will level with you. Diana, the new musical which just opened at the Longacre Theatre, is not “good” by cis-hetero-patriarchal standards of quality. But let’s decenter that trade and focus on what it approximates: a maxi-challenge on RuPaul’s Drag Race blessedly mixed with a Simpsons parody of Evita (which, of course, they’ve already done). It has the preposterous high gloss of a Ru production, with The Simpsons’ innate understanding of the overly-literal silliness that makes the form work.

That it premiered at all is somewhat of a miracle; you have to admire its persistence.This year alone, we’ve seen the People’s Princess grace Netflix’s The Crown and hotly anticipated Kristen Stewart’s first-ever emotive performance in Pablo Larraín’s Spencer, not to mention the fact our current Buckingham-escapée, Meghan Markle, dragged the Royal Family from the comfort of Oprah’s backyard. To paraphrase Ms. Winfrey, when it came to princess discourse, we were having that conversation.

Then, the musical’s toughest battle: its producers' baffling decision to release a pro-shot on Netflix a month ahead of live performances. Twitter did its thing and mocked it into oblivion but, like the cockroaches that will outlive us once the bombs drop, Diana has finally made it to Broadway. And, well, it is the most fun I’ve had in a theatre in a long, long time.

The pinnacle of this glam grotesquerie? “This Is How Your People Dance,” in which Diana (a winking Jeanna de Waal) wishes her first date with Charles (the handsome Roe Hartrampf) at a private cello recital were more aligned with her clubby ideals. Raiding Bach’s public domain oeuvre, the song powerblasts his Cello Suite No. 1 into a pop-rock extravaganza that has the Blonde ambitionist sing, “Alright, I’m no intellect / but maybe there’s a discotheque / where the prince could hear some Prince / and we’d all get funkadelic.”

At one point in the number, as the good sister takes over cello duties while Charles fist-pumps in agreeance and the ensemble throws its entire Buckinghussy into the hyperkinetic choreography, you wonder: When was I last genuinely surprised at the collective mania an onstage troupe can generate in an audience?

If mania is what they inspire, it is definitely not what they play. The ensemble members here—particularly Holly Ann Butler, Tomás Matos, and Chris Medlin—are firing on all cylinders, operating with infectious, pitch-perfect enthusiasm. Their commitment to performing each increasingly unbelievable number at 100% is what makes the production, directed with an apocalyptically deranged sense of fun by Christopher Ashley, gel.

Oh, and how there are unbelievable numbers: Diana’s visit to a hospital ward for AIDS patients, has each male ensemble member go suddenly sybillant, and her lover’s second act introduction features the six-packed Gareth Keegan hitting a shirtless falsetto astride a riding saddle.

What is taste? What is camp? Who cares? As the planet burns and floods, who am I to gatekeep this singing girlboss from a public hungry for in-person joy. Diana is not interested in the emotional nuances of the icon’s life—there are plenty of speculative stories around that already—nor is it a particularly sharp take on celebrity, or history. Rather, it is the blissfully bitchy tale of a kindergarten teacher who is pseudo-abducted into the nefarious romance between Charles and his longtime lover, Camilla Parker Bowles (Erin Davie, sly). It is the happily frantic musical that rhymes “bulimia” with “the media,” and has Queen Elizabeth II (Judy Kaye) openly wish for her daughter-in-law’s demise (intrigue!). The princess suffers a bit, laughs a bit, sings a lot, wears a couple of vengeful dresses, then steps out of the palace into eternity.

And this is where the leveling kicks back in. Theatre ain’t cheap, and there are a lot more, shall we say, prestigious productions around that people will rightfully crown the best of the season. But if you have the means, and a favorite flask or narcotic of choice, Diana is just about the most revelatory explosion of unadulterated joy you can have this side of a K-Hole.‍

Diana is now in performance at the Longacre Theatre on West 48th Street in New York City. For tickets and more information, visit here.