Farce Is Back In Fashion at POTUS — Review 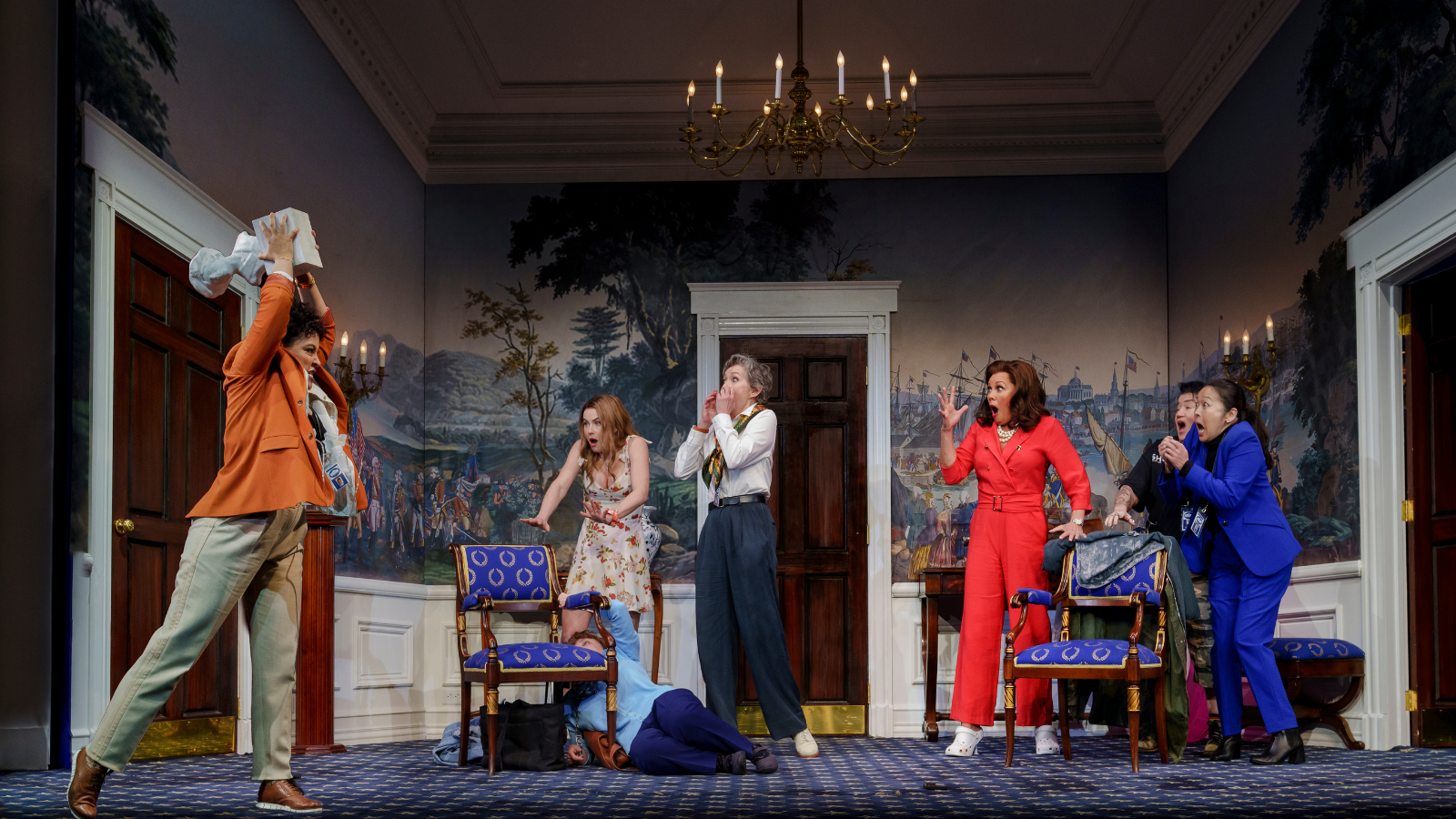 If you want to hear someone say “cunt” onstage in this Broadway season, may I recommend POTUS: Or, Behind Every Great Dumbass Are Seven Women Trying to Keep Him Alive? The new comedy, now playing at the Shubert, says a variety of choice words in its two hours of dialogue, but manages to keep audience members laughing for the entirety. There’s fighting, press briefings, and even a bit of ass play. How can we find more plays that showcase this level of spontaneity and vivacity? Now that’s the eternal question.

The artistic pairing of Broadway legend Susan Stroman (multi-hyphenate and multi-Tony winner) plus Broadway debut playwright Selina Fillinger (Something Clean at Roundabout and Faceless at Northlight) is a perfect ticket. It’s a straightforward comedy—open with a problem and stumble through a solution—but POTUS stands out. Be it an Instagram link that’s titled “BETTER THAN C-SPAN,” or a frequently referenced, equally good Bitch Beats playlist, POTUS captures it’s chaos and cements itself as the most fun and spirited play on Broadway this season. It knows who it is and it knows what it wants.

Stage veterans Lilli Cooper (Chris) and Julie White (Harriet) hold strong in their quips, familiar faces from both musicals and plays. Comedy players Lea DeLaria (Bernadette) and Suzy Nakamura (Jean) surprise not only with their on-stage romance, but also with the physical humor.

Julianne Hough (Dusty) is a star and a wildcard. She flies through comedy and choreography just as intended, and effortlessly commands a bit of song (don’t act surprised! She was in the 2011 remake of Footloose, after all). Hough spars well with Vanessa Williams (First Lady Margaret), an “earthy” vision in fuschia, who handles her delivery and on-stage presence with ease.

Lest I forget a performance so unhinged by Rachel Dratch (Stephanie) it makes me wonder why she hasn’t run through a Broadway house before. We may have missed some opportunities there (put her in The Music Man as a “Pick-a-Little, Talk-a-Little” woman next, please!) I'm just glad she’s at the Shubert, rolling around, smearing blood on the walls, etc., etc.

Scenic design by Beowulf Boritt seamlessly directs the action with a segmented turntable. As we leave each scene, audiences sit in the anticipation of simply who is going to be in the next room. While some of the earlier vignettes may have been on the shorter side, the production avoided any choppy blackouts or scene changes. Instead, lighting sequences (neon pink) by Sonoyo Nishikawa and sound sequences by designer Jessica Paz and arranger and music director Sonny Paladino amplify the fun of it all. Yeah, it’s a turntable and a Katy Perry song, but when the reveal is Williams, I’m happy to play along.

Fillinger’s script is classic and contemporary—bickering and bitching, avoiding any direct mention of the problem at hand. Audiences meet seven women, some working in the White House and some…visiting…and watch their messy interactions unfold while the stakes only intensify. In contrast to others, dare I say a Mamet, Fillinger’s skirted conflict is one I actually care about. And the possible plans and schemes discussed, well, they’re actually executed. POTUS plays to the extremes of comedy and directly to the overzealous and overcomitted woman out there.

Prior to viewing, I wondered if I would spend any time thinking about exactly which “POTUS” this show is about. Who’s the man at the center of it all? Ultimately, it didn’t even cross my mind. Even with the politics and optics of the administration, I was too wrapped up in the depth of each woman and the dynamic between all of the characters. Getting fired, feeling phased out, navigating relationships—these moments stand out within a spectacle and create a well-rounded piece worth taking out-of-town family to.

I can understand a lot of the criticism that POTUS will eventually receive. It’s a little vulgar, a little nonsensical (again, Dratch), but somehow, it is also the most enjoyable play I’ve seen in a while. POTUS is a heck of a good time and a hell of a laugh. Let me go again, next time I’ll wear Crocs.

POTUS: Or, Behind Every Great Dumbass Are Seven Women Trying to Keep Him Alive is now in performance at the Shubert Theatre on West 44th Street in New York City. For tickets and more information, visit here.