School of Fish: The Musical - What on Earth?! 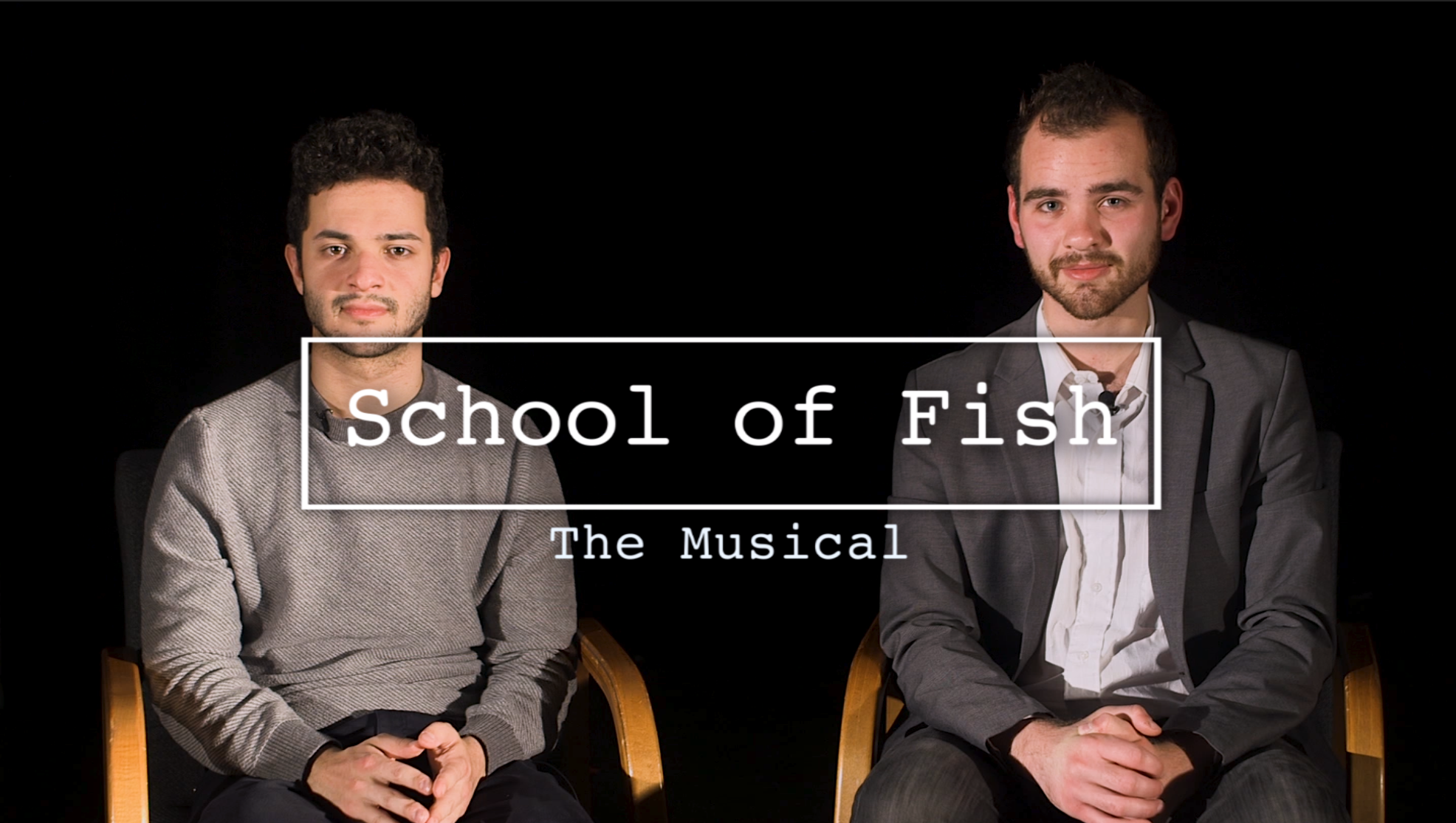 “No mom, we aren’t stealing people’s money... it’ll be returned!”

A few months back I noticed my friends talking about a certain Kickstarter campaign that attempted to raise $200,000 to fund an off-Broadway musical. I investigated more and learned of a new show entitled School of Fish: The Musical

which was indeed about…

Yes, you read that right, a musical about high school fish during World War II.

As time went on, and the Kickstarter continued popping up and gaining traction, I was ready to find out more information.

As the astute investigative journalists that we are here at Theatre Talk Boston, I was intrigued to find out that this wasn’t a real musical but, in fact, a new comedic web series ABOUT hoping to make this fish musical a reality.  A wild, drunken night landed Jimmy Bie and Adam DeAngelo with the premise for this comedic series, told exclusively via Kickstarter updates (and now YouTube as well). School of Fish: The Musical is a delightfully-wacky treat from start to finish.

I caught up with Bie and DeAngelo at an Upper West Side Starbucks this past December to talk about all things SoF. “Being a film student, I would always see my peers create a campaign to raise money for their final project or thesis so we thought, what if we create the most absurd idea, and ask for an absurd amount of money”, noted Bie. The musical, set in 1941, follows fish during their high school years as they navigate the ocean. It is wonderfully disturbing to watch but that was their goal from the start.

The series follows characterized portrayals of Bie and DeAngelo as they go through the trials and tribulations of creating a new musical. Everything from auditions, costume design, and meetings with potential investors is included. They even went so far as renting out the famed Boston Playwright’s Theatre to put School of Fish on its feet for a staged reading in front of an audience of 30 unsuspecting members of the public - I will leave you to watch the episode to get their unfettered reaction. They both noted they drew inspiration from comedian Nathan Fielder and his hit show on Comedy Central,  “Nathan For You”. The delicious uncomfortableness of the piece is a highlight of the series.

As avid lovers of comedy and theatre, this was the perfect melting pot to bridge the two subjects. Both Bie and DeAngelo were part of the popular comedy-improv group Liquid Fun while at Boston University, and enlisted many of their friends to help produce this series. For the last two months of their senior year, along with a cast and crew of almost 30, the created School of Fish.

Bie and DeAngelo thrive off the unexpected in this web series, even down to their guest appearances.  We start with a wild shoutout to Anthony Ramos of Hamilton fame in hopes that he would join the cast. “We wanted someone famous, but not Lin-Manuel Miranda level famous,” Bie said. “It was wild to watch because he was really blowing up as the episodes were being released. I still get the Facebook notifications from all of the Hamilton fan groups we joined!” Sara Bareilles was also on this short list of wishful thinking to join the cast. In fact, they even hired Anthony Scaramucci...yes that is correct, the ex-White House Director of Communications...to record a Cameo for them. “It was just the wildest idea, and from the video it is so clear that he has no idea who Sara Bareilles is and we loved every second of it,” Bie told me.

One of my favorite episodes was when the two creators headed to a bridal shop to look for a wedding dress to go over their fish costume. Who comes on the screen but Krystal Hernandez, a Boston actress making quite a name for herself in the theatre community. With star turns in ART/Company One’s Miss You Like Hell and Huntington Theatre Company’s Quixote Nuevo recently, Hernandez was named one of the top Fresh Faces in Theatre by the Boston Globe. I spoke with Krystal about filming the series and she had nothing but praise and compliments for Bie and DeAngelo. “It was almost entirely improvised,” Hernandez recalled. “They told me to just have fun with it and pretend I was helping any other bride. It was so random but so much fun.

On August 12, 2019, School of Fish: The Musical ’s Kickstarter was officially launched. When asked about cutting down 20 hours of footage to roughly 90 minutes, DeAngelo stated, “We had so much video to go through and it was hard to cut away good jokes, but we always had to remember and go back to the quasi-reality of this. If we winked at the audience too much, it would lose its effect”.

By the 30th day of the Kickstarter campaign, they had raised $3,840, or 1.1% of their initial $200,000 ask. “We wanted to keep stressing that it was an all or nothing goal so for those who did donate, they would get their money back,” said Bie. “This was one of our goals all along, we wanted to make something so absurd, but have just the slightest hint of...wait is this real”?  For all the love and hate (yes the internet is filled with trolls) they received, Bie and DeAngelo took it as a compliment. When questioned what would have happened if the goal was reached, they joked that legally they would have had a musical to put on!

I spoke with an expert to dive deeper into the humor behind the series. Alexander Davis is an adjunct professor in visual and performing arts at Endicott College who frequently studies comedic techniques. He noted the brilliance of the piece and observed that it is in line with evolving comedic trends; Davis harkens it to the likes of the unduly canceled "American Vandal" which can be seen on Netflix. “If we generally look at popular comedic television over the past twenty years you go from a show such as "Friends" (which is one of the last laugh track comedies and was filmed in front of a live studio audience) where the comedic content is internal and situational, to something like "The Office" where we are given an external structure (documentary or mockumentary in this case) which frames and generates the comedy as much as the actual content. We are now seeing a trend where not only are we able to generate comedy from the internal content, and external structure, but also from the ability to comment on how these structures fit in our society (context). School of Fish has a clear  perspective, and utilizes everything at its disposal (content, structure, and context) to put on a great show.”

So the final product? An absurd and wildly hilarious 90 minutes of entertainment and shockingly catchy tunes. Bie is credited with the score, DeAngelo with the book, and both with the lyrics. They enlisted Izzy Raye and Kian Ahi of FOOL to record their title song, and yeah I’ll say it... it’s a bop.

‍
I asked what was next and for now Bie and DeAngelo are living and working in New York while continuing to write. “We both had a great time working on this  and I hope the viewers get a laugh out of it.” So take the plunge and start with the first episode - you’d be a clownfish not to!