FLYING OVER SUNSET On a Smoothed-Out Trip — Review 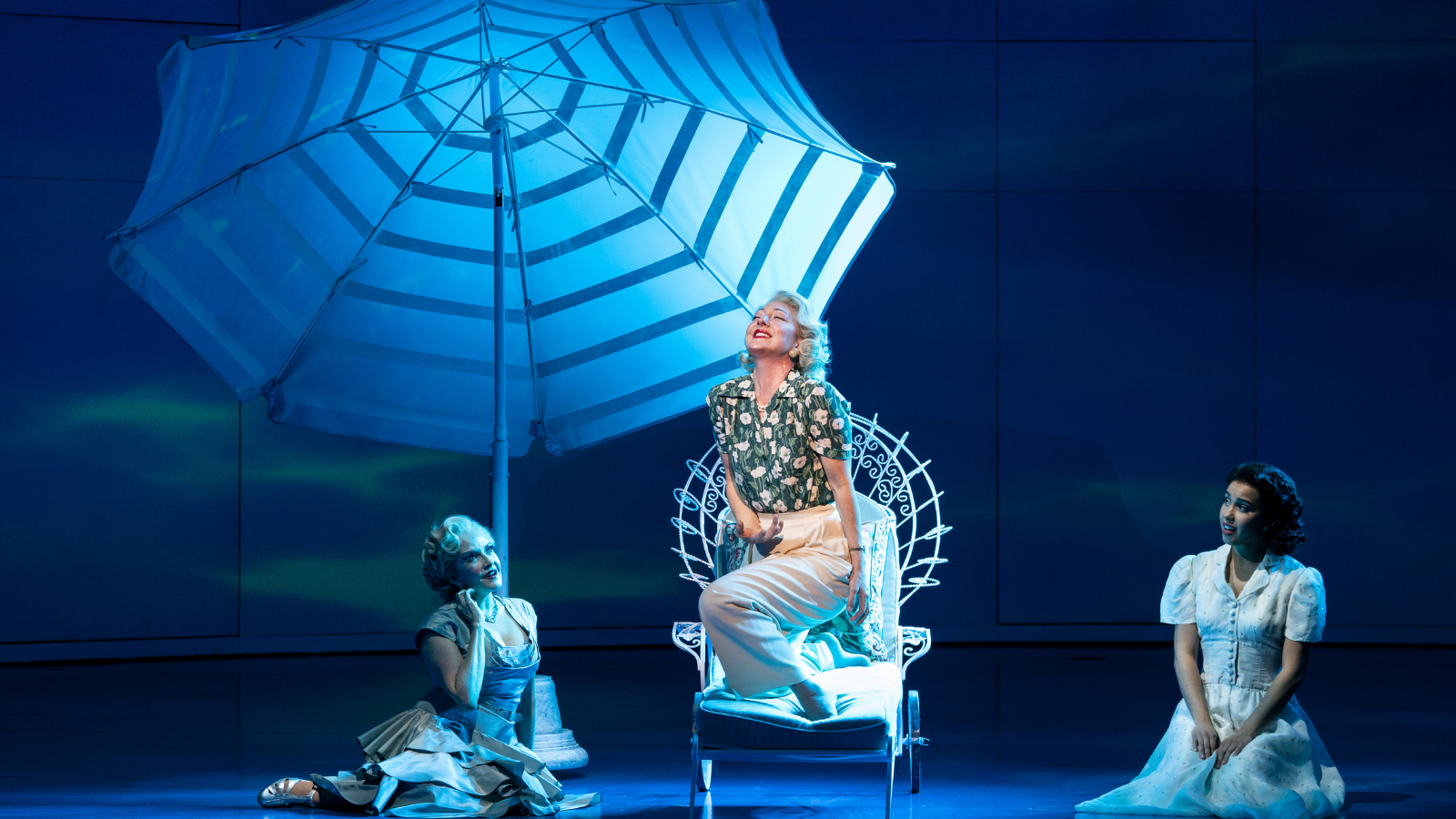 The Doors of Perception is an anomaly: the hyper-literate Aldous Huxley’s 1954 book about his experiences with mescaline, it married his breathtaking combination of crystal clear sociopolitics to a still-unmatched first person account of being under the influence of psychedelics. Equally bizarre was Clare Booth Luce, a staunch Republican congresswoman and ambassador to Italy whose 1936 play, The Women, famously featured no men and gave rich insight into the lives of Manhattan socialites. And then there’s Cary Grant, one of the handsomest Hollywood leading men who mastered the art of screwball while dodging lifelong gay allegations created by his living with another actor.

The three were personalities at a time when the idea of public personas was still a novelty and, as it turns out, were diehard fans of LSD. To throw them into a musical staged on Lincoln Center’s massive Vivian Beaumont Theater (and backed with their budget) should produce enough material for a twelve-hour opus. And yet, Flying Over Sunset takes up this extraordinary mantle and struggles to prove its two-and-a-half-hour runtime.

It’s strange, given the production’s remarkable pedigree: a book by James Lapine, who also directs; music and lyrics by Tom Kitt and Michael Korie, respectively; and committed leading performances by Harry Hadden-Paton, Carmen Cusack, and Tony Yazbeck as Huxley, Luce, and Grant.

Lapine apparently has been an LSD aficionado since the ‘70s, so it’s puzzling that his work here does very little to engage with the mind expansion makes tripping such a profoundly ego-shattering experience: an indescribable — this is why Huxley’s Doors is such a novelty — journey into the Self that seems to spit you out into the center of the universe. The metaphysical revelations it encourages in users, though, is here unimaginatively rendered as armchair a-ha moments that would put a Freud 101 student to sleep.

After a prolonged prologue of a first act, in which we see each of the three icons come to the same conclusion about why, golly gee!, they’re actually kind of into this stuff, the second act imagines them all gathering at Luce’s Malibu home to discover that their neuroses are all about … their mothers. It would be a spoiler if it weren’t so terminally basic.

There are moments of genuine fun — a broken clock is right, etc —which ultimately provide glimpses of what a countercultural joyride this could’ve been. A fourth lead, the trio’s friend and spiritual guide, Gerald Heard (Robert Sella), is buried under the weight of non-fame, as if scared that, as an openly gay lover of psychedelics in the work’s tidied-up 1950s, he could overtake the entire show.

The leads, sharp in Toni-Leslie James’ mid-century costumes, are uniformly great, with Hadden-Paton mining great laughs from his Brit-on-the-loose, Cusack nailing her full-chested 11 o’clock song, “How?” and Yazbeck proving himself, once again, one of the sexiest people ever to tap dance, in the electric “I Have It All.” That early number, in which painful memories of his abusive father berating his dress-wearing younger self (Atticus Ware) surface as he first experiments with the drug, is a tremendous encapsulation of the sheer terror that can be brought about by truly facing yourself, and uses the manic, mounting anxiety generated by tap dancing as a psychic precipice off of which Grant is careful not to fall.

Excellently lit by Bradley King as a memory-ridden shadow play, it approaches the dizzying heights the title implies, as does Beowulf Boritt’s astonishing set, which collapses in and out of itself to reveal the many folds of the characters’ minds and memories. 59 Production’s projections aptly illustrate the melty illusions of a good trip, with wall patterns shimmering and wood panels oozing out of themselves.

But alas, the startling contradictions and dazzling talents that made legends out of Huxley, Luce, and Grant are left unexplored by Lapine’s thudding book, and are rendered tediously monotone in Kitt and Korie’s score, which neither mirrors nor rebels against its time period’s soundscapes.

Late in the second act, the diplomatic Luce casually refers to the liberated Heard by a politely homophobic term, and the still-tripping Huxley and Grant attempt to deescalate by acknowledging that they are just on “separate planes.” It’s one of the few times the book candidly addresses the ideologies, or drug-induced mental gymnastics, at play in the hypothetical situation. Quickly smoothed over, though, it comes to represent the schism between a cautious book and score, and a cast and production team ready to fly over the horizon, into more exciting realms of perception.

Flying Over Sunset is now in performance at the Vivian Beaumont Theater. For tickets and more information, visit here.