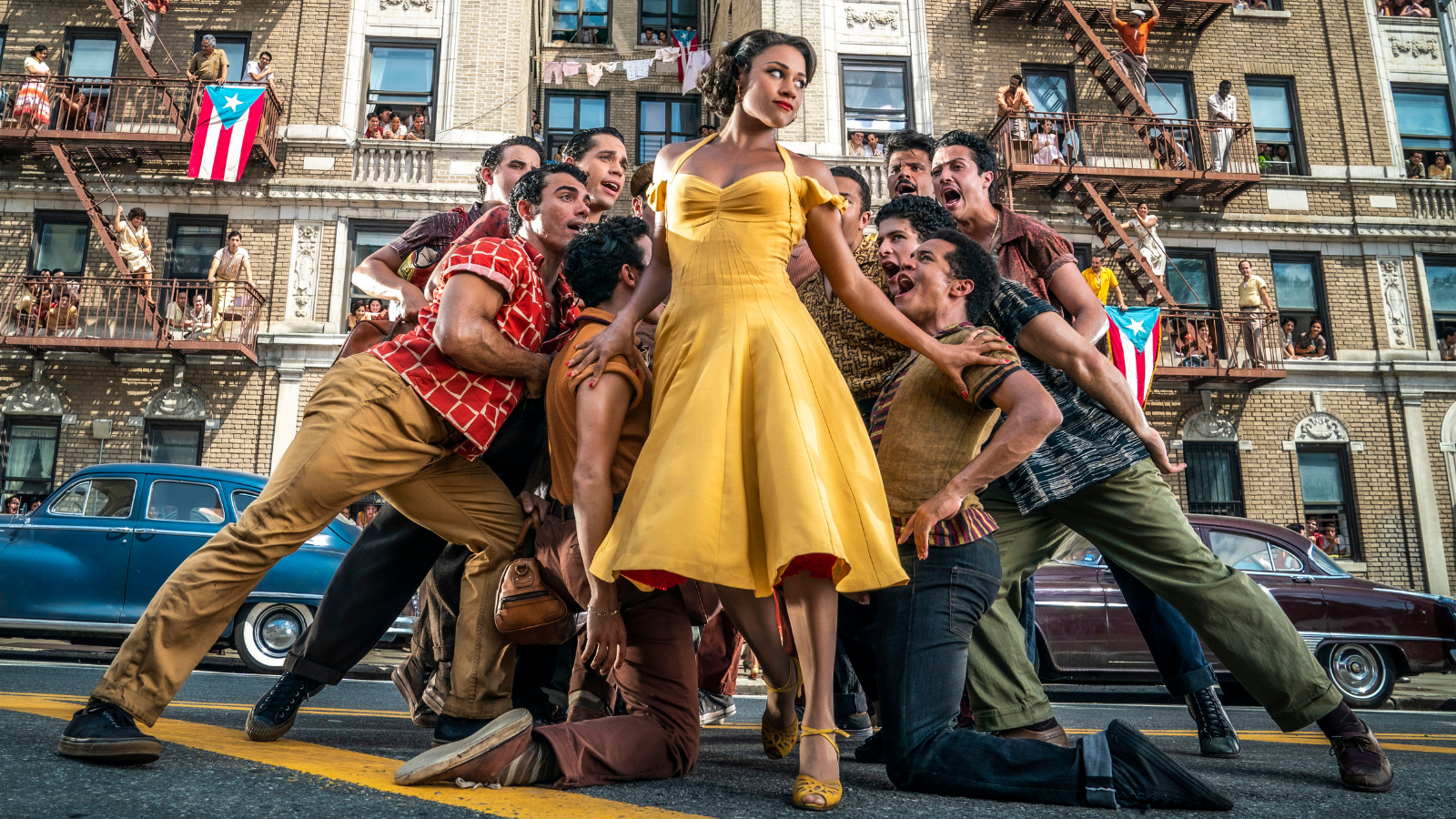 Something’s coming, something good… and someone familiar! The most recent adaptation of West Side Story hits movie theatres everywhere on December 10, helmed by director Steven Spielberg, with a new screenplay by Tony Kushner. The film features a large cast of multi-talented actors, ranging from veteran performer and beloved EGOT-winner Rita Moreno to newcomer and New Jersey-native Rachel Zegler.

Drawing from Romeo and Juliet, West Side Story follows María and Tony, young people who fall in love despite their allegiance to rival groups in town (star-crossed much?) There have been a total of four Broadway productions (1957, 1980, 2009, 2020), one previous movie (1961), and a number of tribute albums (including this absolutely wild version of “Gee Officer Krupke” featuring Salt-N-Pepa).

Whether traditional or overtly modern, each production of West Side Story requires incredible talent. Spielberg’s 2021 film has cast more than 100 performers, showcased throughout the film’s overwhelming 156 minutes. Many theatre-goers will recognize familiar faces from stages near and far, and maybe from a feature on a screen or two. From Broadway, to national tours, to dance competition reality shows, many of these cast members have made quite a name for themselves.

A number of performers from the film have previously been featured in Broadway productions of West Side Story, both the 2009 revival and the 2020 revival. For clarity, these credits are not mentioned below, but their performances are acknowledged here nonetheless.

This revival’s Anita is played by Ariana DeBose, who joined the cast after starring in Summer: The Donna Summer Musical in 2018. DeBose is also known for her role as the Bullet in the Original Broadway Cast of Hamilton. Many Hamilton cast members, from both Broadway and the National Tours, are featured in West Side Story including Josh Andrés Rivera (Chino), Ricardo A. Zayas, Tanaira Sade Vazquez, Sean Harrison Jones, and John Michael Fiumara.

Throughout the years, some WSS cast members have also performed roles in Billy Elliot the Musical. This includes David Alvarez, who plays the key role of Bernardo in West Side Story. Cast members Daniel Patrick Russel, Julian Elia, Ben Cook, and Myles Erlick have also played Billy on Broadway, the National Tour, and productions throughout Canada.

In addition to the Sharks and Jets, seasoned actors Brian d’Arcy James and Corey Stoll feature as law enforcement figures Officer Krupke and Lieutenant Schrank. James has a wide array of Broadway credits, including Something Rotten, Shrek, and The Ferryman, just to name a few. Stoll has multiple credits from The Public, Shakespeare in the Park, and Classic Stage Company.

There are also two notable sets of theatre siblings in this film:

Brothers Jacob and David Guzman play Sharks Junior and Tino, respectively. Jacob Guzman is best known for his roles in West Side Story (Broadway 2020,) Fiddler on the Roof (2015,) Newsies, and in the Angelica tour of Hamilton. David is also known for his work in Hamilton (Broadway) and Newsies.

Sisters Sara and Leigh-Ann Esty dance with the Jets. Both sisters have toured nationally with An American in Paris. Sara also spent time in the show on Broadway, and currently plays Meg Giry in The Phantom of the Opera. Leigh-Ann joined the cast of the film after her time in Carousel.

Three cast members of West Side Story have big Broadway plans and promise to be ones-to-watch this winter. Gabriella M. Soto, who plays Shark “Conchi,” will make her Broadway debut in Wicked this month. Jets members Daniel Patrick Russell and Eloise Kropp will both be featured in this year’s revival of The Music Man, set to begin previews at The Winter Garden Theatre on December 20th.

Since this production (and all of them, frankly) is full of intense choreography, it’s no surprise that the film features some famous dancers as well. Dancer Gaby Diaz, a Shark, is well-known for winning So You Think You Can Dance Season 12. She was also featured in the 2021 Netflix adaptation of tick, tick… BOOM! Ricky Ubeda, the winner of SYTYCD Season 11 is also featured in West Side Story. After winning his season of the popular competition series in 2014, Ubeda went on to perform in On the Town in 2014 and Cats in 2016. Ilda Mason, who plays Luz on the Sharks side, has performed as a professional dancer on Dancing with the Stars Panamá. Mason won the second season of the show. (Note: Ariana DeBose has ALSO performed on So You Think You Can Dance! DeBose ranked in the show’s Top 20 during Season Six.)

Outside of the theatre-sphere, two of the film’s actors have also had recent notable performances in pop music videos. Adriel Flete, who plays Shark “Julito” can be seen as a featured dancer in “La Canción,” a video by J Balvin and Bad Bunny that has been watched over 466 million times on Youtube. Talia Ryder, who plays Jet “Tessie” (and was in Matilda 2015-2016) can be seen as Olivia Rodrigo’s co-star in the music video for “deja vu.”

Whether you saw them onstage in a theatre last night or maybe back in 1996 (check out this Instagram throwback from cast member Yassmin Alers, whose previous credits include time in the Original Broadway Cast of Rent), the cast of West Side Story is undeniably eye-catching. From previews and early screenings alone, Spielberg’s latest has garnered some early Oscar season buzz and promises to keep the conversation going.

West Side Story will be released in movie theatres everywhere today, December 10. The release (previously postponed due to COVID) takes place 60 years after the original film's debut, which won the Academy Award for Best Picture.