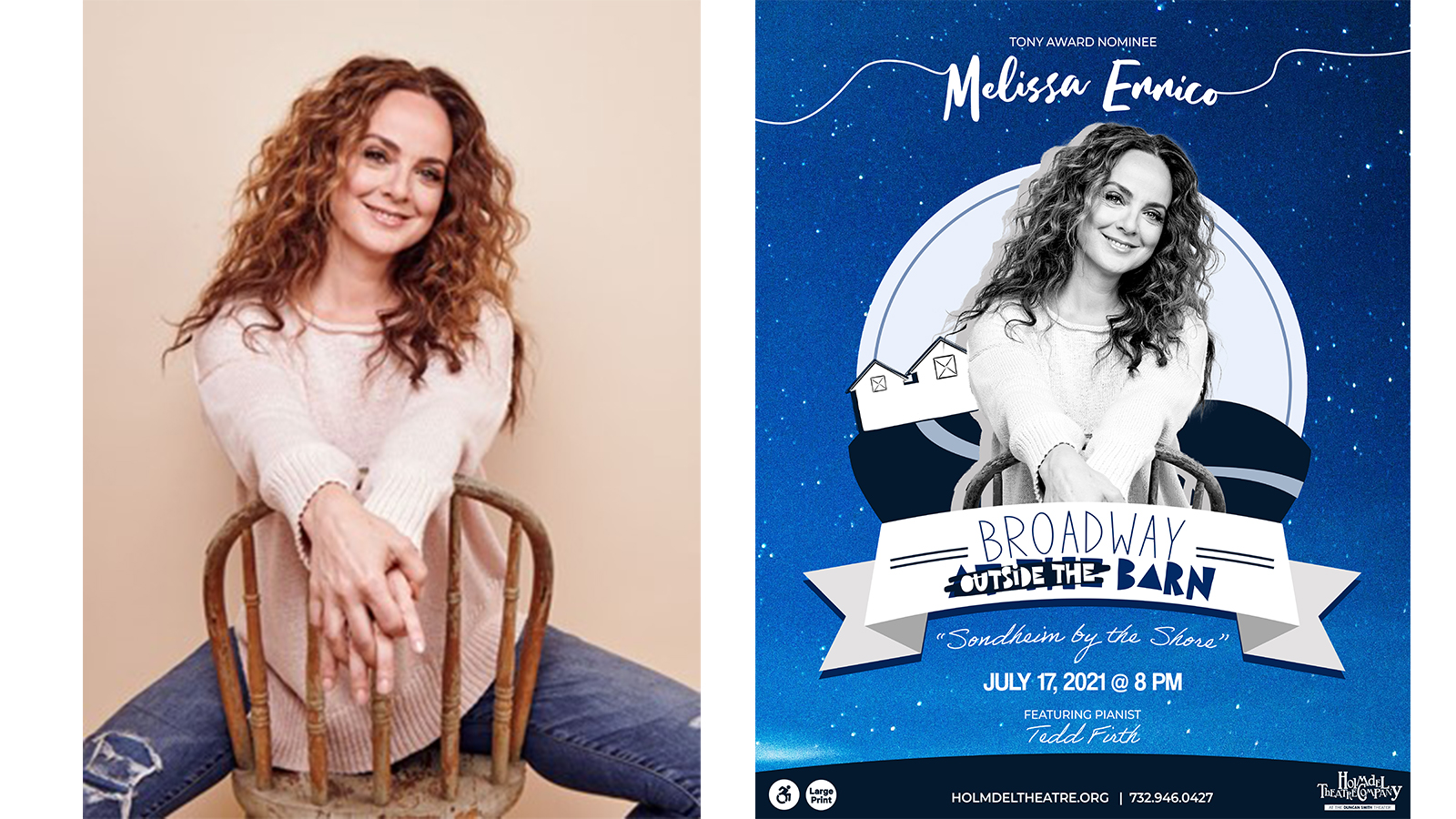 Holmdel Theatre Company is proud to announce their next installment of their 2021 Broadway Outside the Barn series with Melissa Errico: Sondheim by the Shore on Saturday, July 17th at 8 PM ET.

“No concert in which the irresistible Melissa Errico appears could ever be anything but worth seeing, “ declares The Wall Street Journal, and now, after multiple sold-out engagements on stages from London, Paris, and coast-to-coast in the USA, Tony Award-nominated singer, actress, and writer Melissa Errico will dazzle with a special concert Sondheim by the Shore to mark her Holmdel debut.

She brings her gorgeous voice, and a unique and unpredictable intelligence, wit, and mischief to a set list focusing on the music and lyrics of Stephen Sondheim, but peppered with some of her other musical “passions” and obsessions including Rodgers & Hart, Stephen Schwartz, Randy Newman, Joni Mitchell and Michel Legrand.

Come and experience this “matchless cabaret singer “ with a “beautiful voice and impeccable diction” (Wall Street Journal) as she shares classics and curios from Into the Woods, Follies, Sweeney Todd, Anyone Can Whistle, Company, and A Little Night Music. This concert is one no Sondheim or Broadway fan should miss! Accompanied by the great jazz pianist Tedd Firth, Melissa will soar and delight with such Sondheim classics as "Send In The Clowns", "Children and Art", and "Goodbye, For Now".

Tony nominee Melissa Erico made her Broadway debut as Princess Kitty Scherbatsky in the 1992 production of Anna Karenina. Over the course of her acclaimed career, Errico has returned to Broadway in My Fair Lady, High Society, Amour (Tony nomination for Best Actress in a Musical), Dracula The Musical, and Irving Berlin’s White Christmas. In addition to Broadway, Errico has performed at the Kennedy Center, where her history with Sondheim began when he selected her to star as Dot in Sunday In The Park With George. Additional Sondheim projects include starring roles in acclaimed New York productions of Passion (Clara) and Do I Hear a Waltz? (Leona).

Tedd Firth is a NYC based musical director, pianist and arranger who has worked with the upper echelon of talent from the worlds of Broadway and Jazz. Appearances include Carnegie Hall, Lincoln Center, the Blue Note, Birdland, the Iridium, the Algonquin, the Cafe Carlyle and Feinstein's at the Regency and the White House.

“I am ecstatic to welcome Melissa and Tedd to Holmdel, '' said Holmdel Theatre Company Executive Director Colleen Cook. “Our audiences love Sondheim and to be able to bring such gifted and versatile performers to Holmdel is a dream come true.”

In order to provide the safest environment for its patrons, the wildly popular and award-winning series Broadway at the Barn has been temporarily renamed as Broadway Outside the Barn, taking place outside the intimate Duncan Smith Theater, a 125-year old renovated barn that has been transformed into a charming 99-seat theater. The set up will include socially distanced clearly marked out pods on the lawn and attendees will bring their own lawn chairs.

Tickets are $40 and now on sale online. Should the event be cancelled due to inclement weather, patrons will be issued full refunds. Sound and lighting design by HTC Technical Director Chris Szczerbienski. This installment of Broadway at the Barn is sponsored by Doreen DeMarco and Kimberly Ardise of Berkshire Hathaway HomeServices - Fox & Roach Realtors, Joe and Keri Todisco, JGS Insurance