In IT’S NOT A TRIP IT’S A JOURNEY, Black Femmes Wander into New Worlds — Review 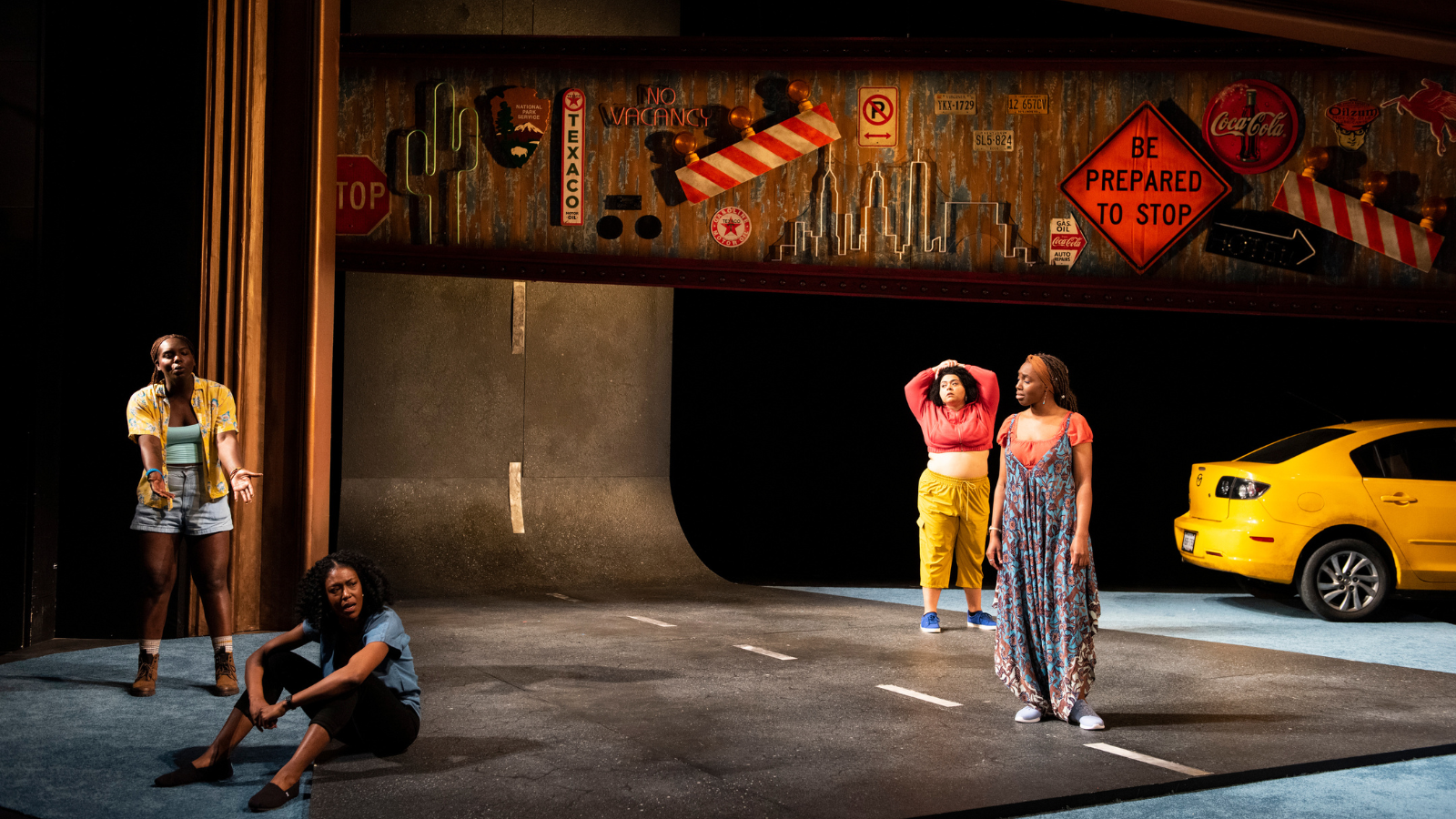 The journey towards the Western frontier has long been a part of America’s mythology, but it’s also one that’s excluded or comes at the expense of people of color. Historically, manifest destiny seemed like a lovely promise for white folks. But if you were Indigenous, your land was being stolen; if you were Chinese American, you could be banned from entering the country for decades; and if you were Black, you could be banned from literally existing in the state of Oregon,

Journeys westward have been particularly fraught for Black Americans, who are under constant external and internal policing in this country. Narratives of Black people going on epic journeys are usually ones full of danger, whether they’re running from the law (like in the controversial film Queen & Slim), or fugitives/maroons from slavery (like in the surreal book/series The Underground Railroad).

But there’s another American history of Black explorers setting off for journeys, in spite of and because of their identities. Academic Sarah Jane Cervenak calls them “wanderers” in her 2014 book Wandering, which explores Black artists and philosophers who wander spiritually through the world. Cervenak writes “...because wandering exceeds the terrains of the visible and the physical and because it’s not possible to know and legislate the private ambulations of the spirit, antiwandering laws and acts don’t spell the end for black freedom.”

I was reminded of histories of policing and wandering while watching Round House Theatre’s kinetic production of it’s not a trip it’s a journey. Charly Evon Simpson’s new play, making its repertory premiere as part of the first annual National Capital New Play Festival, carefully intertwines policing and wandering to both liberating and devastating effect. Watching it’s a journey feels like going on the circuitous road trip the show's characters go on: it’s sometimes leisurely, sometimes roaring to life, but always moving, physically and emotionally.

The show begins at the journey’s end, with the show’s Black woman lead June (Erin Margaret Pettigrew) undergoing something like a panic attack while staring at the Grand Canyon. Then, we’re taken back to the start of the journey: June is in NYC and is dead-set, for some unknown reason, on going to the Grand Canyon. She first recruits her boisterous friend Frankie (Cristina Pitter) for the ride. Despite Frankie’s hesitations about journeying into the American midwest—she even suggests bringing a token white friend for protection—she’ll do anything for her friend, and agrees to go along.

June and Frankie convince two other Black friends to join their odyssey, with the promise of visiting eccentric American landmarks on the way. The recently-heartbroken Rain (Afua Busia) agrees to go in order to see a large sculpture of an elephant in New Jersey; the sincere, trans femme Willie (Dezi Bing) agrees to go in order to see the world’s largest ball of twine, a long-held obsession of theirs. With the group assembled, they hit the road, jamming to the bops of Missy Elliott, Janelle Monae, Destiny’s Child, and especially Solange’s ebullient jam “Junie.”

That last song made me hesitate when hearing it initially. “Junie” is a track more than 3/4 of the way through Solange’s album A Seat at the Table, an extended meditation on microaggressions Black women face. The song arrives late in the album as a hard-fought celebration. I wondered if it’s a journey might be skipping straight to the party, without doing the leg-work of exploring these characters’ clearly aching inner lives.

However, as the friend group continued their journey through America, my fears slowly melted away. This is a play that is far more strange, and subversive, than the comedy road trip it may appear to be (and that the conventional-looking set full of Americana memorabilia prepares the audience to expect). Director Nicole A. Watson is using music to lull the audience into a sense of sororal bonding, before Simpson’s play sneakily wanders into themes and worlds you had no idea were going to be staged. It’s like an eccentric playlist: every song transports you into a new headspace.

The most subversive material in the show is playwriting itself. Using the structure of the road trip to tell the story episodically, Simpson continually wanders into new genres. We’re given a queer rom-com, an upsetting meditation on self-harm, a wacky slapstick sequence, a chill hangout movie, and even a spaghetti Western. Sometimes this genre mashup messes with the pacing. Many vignettes don’t exactly feel aimless, but rather a little lost on a side-road and not on the dramatic highway of tension. But the point of these ever-changing genres shines through: life for Black femmes is multidimensional, and can also switch from a comedy to tragedy in seconds.

The subversion continues in the performances as well, in which each character (and performer) dismantles the “type” each one fashions for themselves. Pitter slowly undoes the tough-as-nails persona of Frankie, lending her a surprising tranquility. Busia allows us to see the enormous pressure driving many high-achieving Black women like Rain to success. And Bing does a fantastic job of giving sensitivity to Willie; some of her scenes of queer intimacy are almost unbearably tender.

With every episodic step on the journey, the play’s true focus begins to emerge: a rebuke of femmephobia, which writer Ozy Frantz once described as “the devaluation, fear, and hatred of the femininine: of softness, nurturance, dependence, emotions, passivity, sensitivity, grace, innocence, and the color pink.” Simpson’s response to this femmephobia is to alternate between her characters grappling with this oppression and defiantly celebrating themselves; she’s working in the tradition of ntozake shange’s for colored girls, Solange, and Aziza Barnes’s BLKS. But Simpson’s also mapping this tradition onto two other ones: the fugitive escape narrative and the Black wanderer. It feels radical, a sort of reclamation of American journeying that never feels naive to America’s horrors.

That brings us to the second act, which (without giving away too much) becomes almost an Adrienne Kennedy play, full of strange, visceral, mournful imagery told through monologue. I can see why Watson was attracted to directing this play, having previously created the Adrienne Kennedy Festival on behalf of Round House and the McCarter Theatre Center. It’s Pettigrew’s June that initiates the monologue, since June feels like there’s a ball of words in her chest needing to come out.

Pettigrew delivers my favorite acting performance I’ve seen this year. She doesn’t just spit out the words. She masticates them, breaking language down in her mouth until it dissolves on her tongue, words becoming both hollowed of their meaning and an essential part of her body. It’s an astonishing feat, one that encapsulates all of June’s sprawling desires and fears, and truly demonstrates the racing mind of a Black wanderer.

What are we to do when witnessing such a spectacular act of self-unraveling? Maybe all we can do is watch in solidarity, as Frankie, Rain, and Willie have been doing the entire play. Long road trips aren’t necessarily always fun. But June’s friends agreed to go with her in order to make sure she wasn’t alone as she processed her pain, wandering America in order to find some missing part of herself.

It’s a similar journey the audience has to go on, regardless of their race: we must wander with these Black femmes, through suffering and joy, for their characters to even exist onstage at all. I’m reminded of words by the Combahee River Collective: “If Black women were free, it would mean that everyone else would have to be free since our freedom would necessitate the destruction of all systems of oppression.” With it’s not a trip it’s a journey, Charly Evon Simpson asks us to imagine what it would take for Black femmes to be free. She asks us to let our minds wander into a new world, one borne from our painful reality.

it’s not a trip it’s a journey performed its final performance at Round House Theatre in Bethesda, MD through and had to suspend the rest of the run to a non-Covid related illness. For more information visit here.