IS THIS A ROOM Unsettles Reality — Review 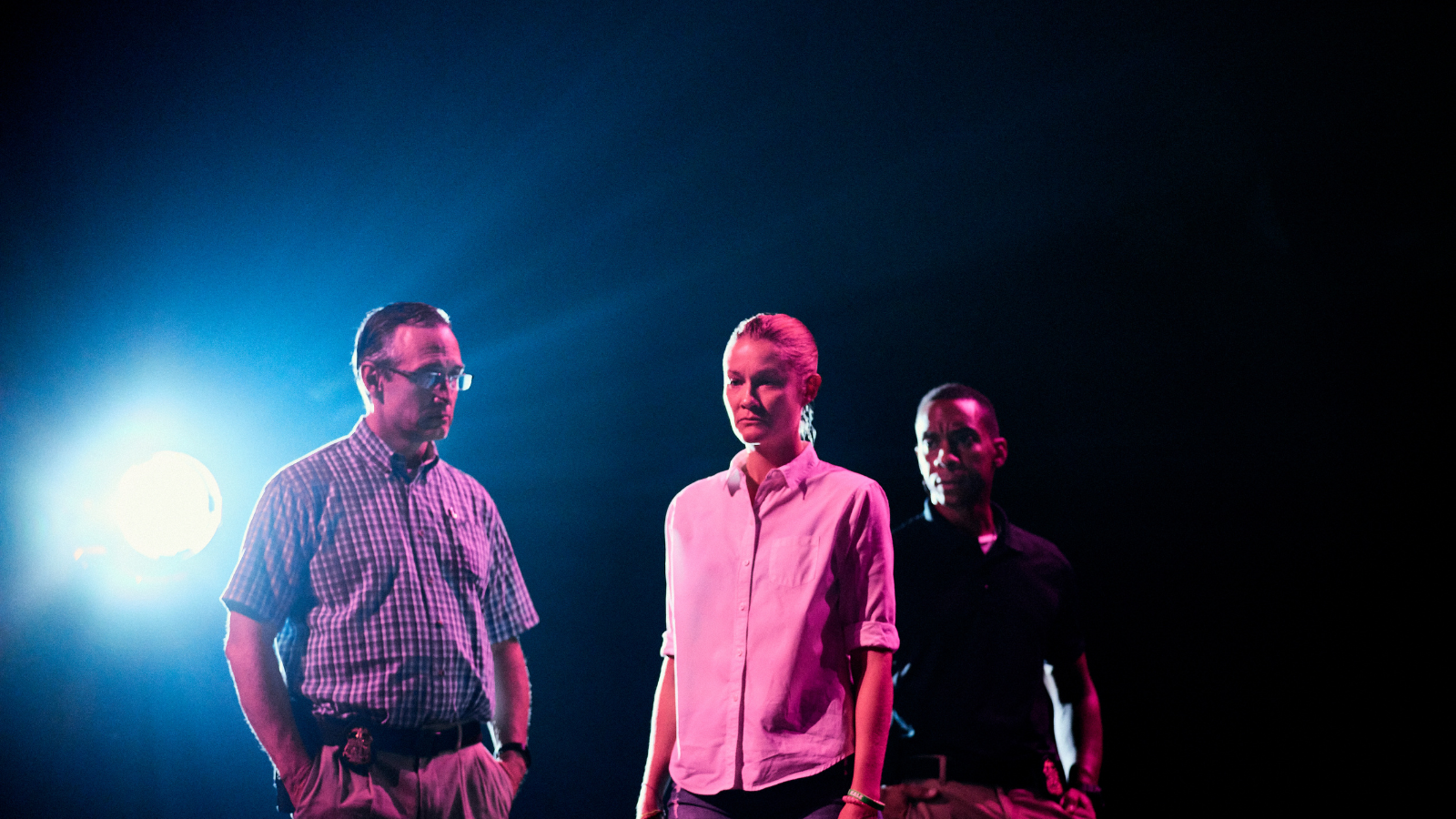 There is something that feels unfinished about Is This A Room, Tina Satter’s docudrama which just opened at the Lyceum Theatre after successful runs off-Broadway. Not undone—though its lead, former intelligence specialist Reality Winner, who was convicted of leaking classified government information in 2018, certainly ends up that way—but unsettled. The play just sort of starts and ends, without fanfare or adornment, and yet, in its heightened presentation of reality, emerges as one of the most radical works on Broadway.

Winner (yes, that is her real name) was getting back to her pets on June 3, 2017 when FBI agents approached her at her house in Georgia. Taken from the actual transcript of her interrogation, Is This A Room is not so much a dramatization of her arrest as it is a laying bare of the fraught emotional landscape taking place within the real words spoken by the people present.

Immaculately directed by Satter herself, and staged on a flat platform flanked by elevated stands designed by Parker Lutz, the production finds agonizing claustrophobia in the mundanity of bureaucracy—of purposely blank systems built on talking around everything, of getting to the point, of facing the inevitable. Winner (played indelibly by Emily Davis) has to know why these three men have come to her home, and still no one dares make the first move. Agents Taylor (Will Cobbs) and Garrick (Pete Simpson) ask about her cat and CrossFit routine as a third colleague, listed in the program as Unknown Male (Becca Blackwell), paces around mumbling on his walkie-talkie. They exchange pleasantries, leisurely acting out the politeness of strangers on a loop that threatens to last a lifetime. Winner’s cat, too—a static puppet designed by Amanda Villalobos—peeks from the proscenium with the petrified anguish of a Munch painting.

The unavoidable becomes inescapable and, once she begins to crack, the conversation starts to pour down like the sweat drops rolling down Davis’ tortured face. Suddenly, it's all moving so fast, capturing the dizziness of consequences suffered after decaying delay.

“With everything else coming out, why isn’t this getting released?”

Winner was flustered by the 2016 Presidential election and its surrounding media circus, but we are never given her motivations. She, herself, might not have acknowledged them or, even more gut-wrenchingly dreadful, she had no real motivations.

Broadway is not known for inconclusive, untidy works, and Satter’s docudrama stands out as a challenge to the notion of finality. Is This A Room offers no answers, no solutions, and no reprieve. What it does present is a tour-de-force performance by Davis, whose slow release of her character’s Air Force trained stolidness becomes almost unbearable to watch. Matched by Thomas Dunn’s stark lighting and Sanae Yamada and Lee Kinney’s excellent, buzzy sound design, her personal descent into hell becomes an existential imperative, plunging the whole world into an abyss of unknown impulses and unfinished consequences.

Is This A Room is in performance at the Lyceum Theatre on West 45th Street, where it plays in repertory with Dana H., through January 16, 2022. For tickets and more information, visit here.