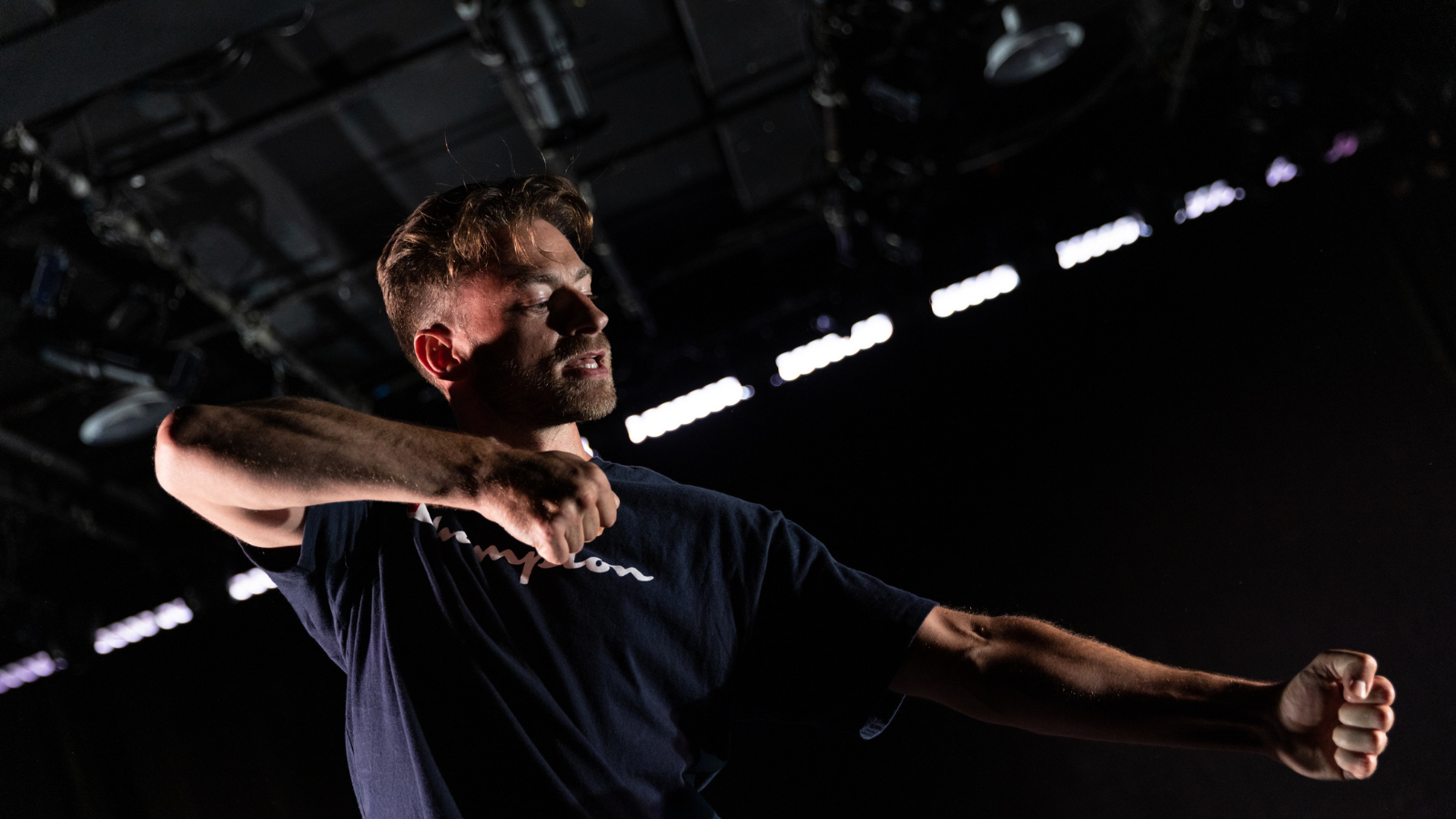 On Saturday night, I trudged through the rain to get to the arena- I mean theatre, for Liza Birkenmeier and director Katie Brook’s Islander. I accidentally wrote arena because when I walked into the theatre at HERE Arts Center, there was energetic, intense music playing, just like before a big sports game. Islander is a play about the devastating 2017-2018 season for the New York Islanders (that’s the hockey team for those of you who don’t follow sports.) Composed of materials from interviews, podcasts, and game commentary, this verbatim play explores white masculinity (and fragility) in the face of humiliating defeat.

David Gould plays our protagonist (Man), a player for the Islanders. At first this player is cocky and arrogant, crediting his success in previous seasons up to skill and not luck and believing that it is his right to be successful in this upcoming season. His entire way of existing feels pinned on cliches, like when he calls ‘good... the enemy of great.” Mr. Gould plays this character with an endearing sense of childish naivete and spectacular cluelessness that makes it irresistible for the audience to fall madly in love with him, despite the fact that his words mean almost nothing. As the play goes on and the Islanders continue to lose game after game and we begin to see our protagonist alter his previous beliefs. The belief that his success is all skill and no luck gives way to full superstition. He begins to question summers he took off and previous choices he made. He doesn’t take back any of his previous words and statements, he just changes their meaning. It’s slick yet slimy, but the changes in the way he references his game play reflect the way the catastrophic season preys on his psyche. Even though the team is being annihilated, this character maintains a sauve level of chill.

With the intentions of the text so focused on examining white masculine fragility, it would be easy for Mr. Gould to become a caricature of this player, yet he doesn’t. His performance is layered. Even through absurd moments, he maintains seriousness and honesty. As the prospects of making it to the playoffs deteriorate and rumors that John (the star player) may be leaving the Islanders for another team begin to swirl, our protagonist keeps calm, cool, and collected. Once it’s official that Jon is leaving though, our boy gets angry. In a hilarious scene, Man lashes out at Jon, played by 5th grader Aksel Latham-Mitchell. Watching a grown man berate a child is absolutely ridiculous and goes to show how outrageous white fragility is.

Playwright Liza Birkenmeier and director Katie Brook have done a commendable job compiling the various sources that make up the text and condensing them into a thorough(ish) narrative. While our main character feels complete and well rounded, and Jon has been created as the perfect theatrical device, there is another character (Other Man) who doesn’t totally fit into the narrative. Played by Dick Toth, his relationship to our hero is unclear and with his entrance is about 75% into the play, he feels more like an after-thought than an equal to our protagonist. Other Man offers the same type of cliche inspiration that our man has been spewing for the last hour, perhaps Other Man is there to exemplify how Mr. Gould’s character is beginning to lose faith in his way of thinking, but that connection isn’t explicit enough to offer a fresh idea to a play that ran almost 20 minutes longer than the running time on the program. Though the play is a bit longer than needed, director Katie Brook keeps things interesting. Towards the beginning of the play, Man delivers game commentary about his performance in the game into a mirror. It’s effective in expressing how Man’s sense of self worth is interwoven into his performance in the games. But this device is only used twice and by the end of the play, I had almost completely forgotten about it. There’s also a lovely dance that Man does. It demonstrates the grace of this player and was performed with such precision and verve that it really helped to highlight Man’s skills as a player.

While it’s clear white fragility and toxic masculinity is not limited to hockey and other sports, the play seemed to shy away from its hockey context in an attempt to serve as an Everyman story, but it fails to remove itself entirely from its setting and wounds up existing in a no-man's-land that made the story less effective and slightly confusing, especially since so much of the marketing materials seem to highlight that this is a play about hockey.

Despite its flaws, Islander is an enjoyable evening of theatre. I laughed throughout the entire performance and after a year and a half of misery and despair, laughing in a room with others was enough to make it a worthwhile evening. What really warmed my heart was that this felt like a sign of the return of the theatre industry in New York. We’ve focused so much attention to the plays opening up on Broadway, but to me, the health of the theatre industry must be assessed by the presence of the off-off-Broadway scene. Sitting in a packed house last night proved that the art of theatre is being practiced again and risks are being taken. The ultimate success of those risks is inconsequential, what matters is that spaces to take risks are returning and the entire theatre industry in New York City is ready to emerge from the pandemic triumphantly.

“Islander” plays at the HERE Arts Center through September 4. For tickets and more information, visit here.