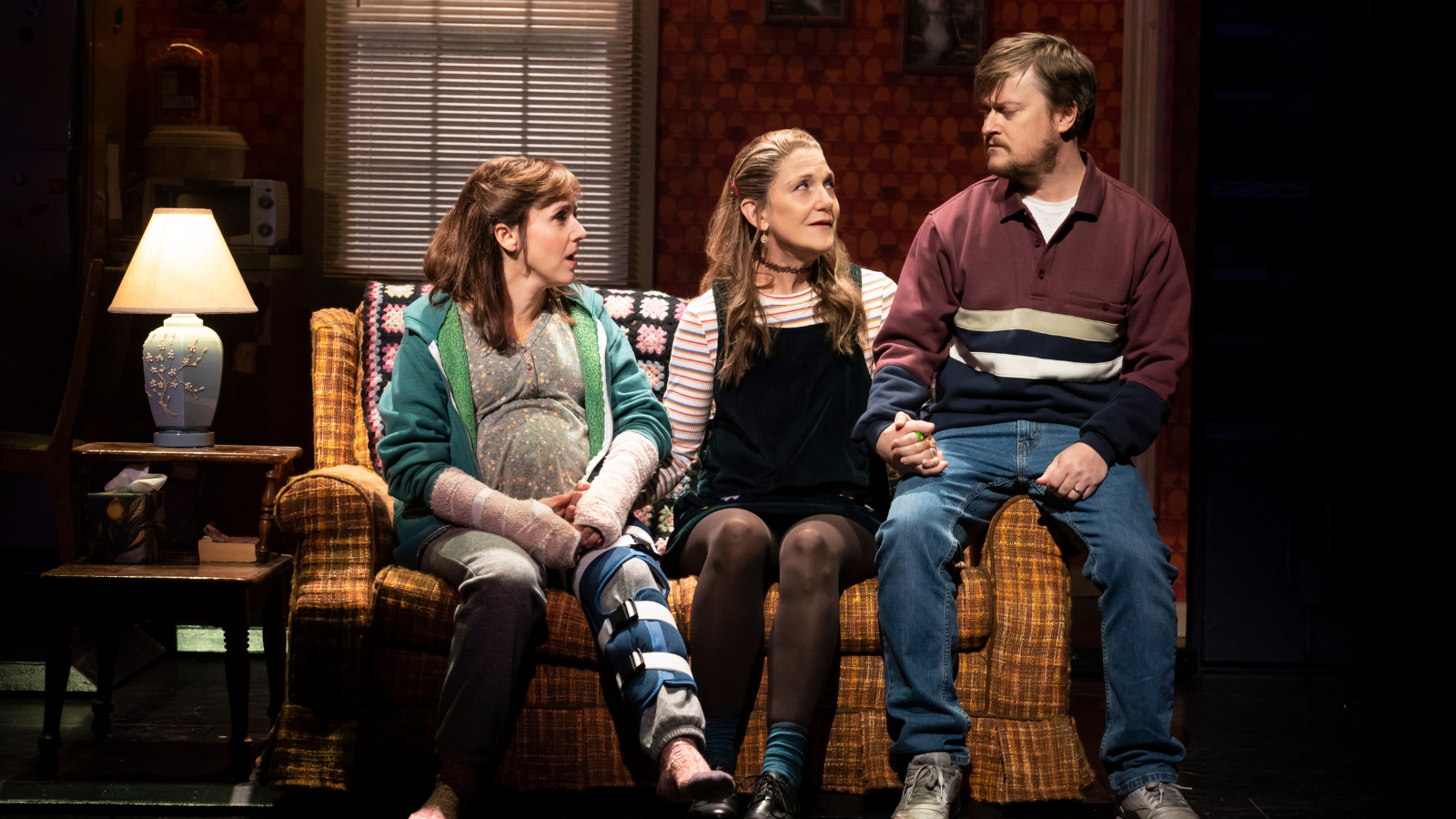 I worried about how Kimberly Akimbo would transfer to Broadway as its titular character’s parents fret over their next baby being nothing like the last. Except I, of course, wanted things to stay the same. The musical’s premiere at the Atlantic Theater Company last year, which I made damn sure to catch twice, was like lighting a bottle: a gorgeous new Jeanine Tesori score, with piercing lyrics and a bold book by David Lindsay-Abaire, and all-around excellent performances, led by a radiant Victoria Clark. But an intimate story without bells and whistles, birthed in that Chelsea space’s former church walls, seemed too precious to hold true north of 42nd Street.

Now at the Booth Theatre after what felt like a lifetime of anticipation, it arrives on Broadway not only unscathed, but even better, proving itself one of the greatest musicals of our time, and something close to a miracle.

Very few things have shifted in transferring—it’s still adapted from Lindsay-Abaire’s 2000 play of the same name and focuses on Kimberly Levaco (Clark), the new girl in a ho-hum New Jersey town whose rare genetic disease causes her to age faster than normal. Though trying to fit into the high school scene is unenviable enough, she’s more preoccupied by her fast approaching 16th birthday—the year most people afflicted with her condition pass on—and a chaotic life at home, where her deadbeat dad and selfish mother (Steven Boyer and Alli Mauzey, each developed in their performances) are too busy bickering to warm up dinner.

Her resignedly optimistic demeanor, a remarkable and desirable mix of head-down but chin-up, is disturbed by her aunt Debra’s (Bonnie Milligan) criminal reappearance, and  nerdy-cute classmate Seth’s (Justin Cooley) invitation to collaborate on a biology presentation about diseases. She (deviously) wants to rope her and her classmates into an elaborate scam; he (guilelessly) wants her to amplify her condition for a higher grade. Kimberly mostly just wants her Make-A-Wish dream to come through in time, but finds timid happiness flirting with Seth, who introduces her to his love of word puzzles. This leads to one of the sweetest love songs in the canon, “Anagrams,” which Clark delivers with eye-watering warmth.

Milligan, reviving one of last season’s buzziest performances, smartly does not broaden herself for the bigger space, her brassy characterization finely tuned from the jump. The only thing that’s increased here is the size of the ovation she receives after her stunner of an act one solo, about the joys of seizing the day (and a check).

Conversely, the young Cooley has turned what was a lovely surprise at the Atlantic into a proper breakout; what I thought to be a tiny, quirky performance off-Broadway happily fills up the Booth Theatre, revealing a richness that was always there, now scaled up to match the sensational Clark’s veteran wisdom and ability. His lovely voice has filled out and he carries himself with a leading man surety that promises an exciting career.

And the young performers around him, who urge us to care about their teens’ trivialities, remain the same—Olivia Elease Hardy, Fernell Hogan, Michael Iskander, and Nina White—but have similarly grown into Broadway performers of considerable talent. They are delightfully uncool, and the season’s most joyful ensemble and backup dancers. (Iskander was out on Opening Night, understudied by the wonderful Miguel Gil).

I found myself thinking that the maturity of the show lies in its sincere appraisal of its teens’ dilemmas—Kimberly’s, of course, but also those of her peers. Their dramas might mostly be about clothing and crushes, but Lindsay-Abaire and Tesori—whose complex work is worth its bittersweet salt through a sharp combination of singsongy plunks and penetrating strings and woodwinds—never condescend.

“Our Disease,” one of the score’s highlights, is a masterful buildup of dread that collapses the gap between the teens’ classroom anxieties and Kimberly’s existential assignment. As the music swells menacingly in anticipation of her uneasy biology speech, we’re kids in school again, afraid to mess up our presentation, but adults in the audience, afraid to meet an uncaring and untimely end.

The grownups in the show are in a comparable state of arrest, their young dreams dashed by life and their own mishandlings of their plights making perpetual children out of them. They are crass, petty, and unobservant of consequences after lives forced to suffer through them. But however much you might hate them at times, as Kimberly certainly does, or want to condemn them, they are written and performed with a humanity that’s impossible to shake. We can’t write them off, and that complexity is burdensome, even taxing, but artistically and spiritually so, so rewarding.

Thus Kimberly Akimbo, among so many other beautiful things, is a show about what we’re given, and whether we accept them as gifts or curses—sentences. Scramble enough anagrams, this musical teaches us, and a sentence can become something new and unexpected.

Kimberly Akimbo is in performance at the Booth Theatre on West 45th Street in New York City. For tickets and more information, visit here.