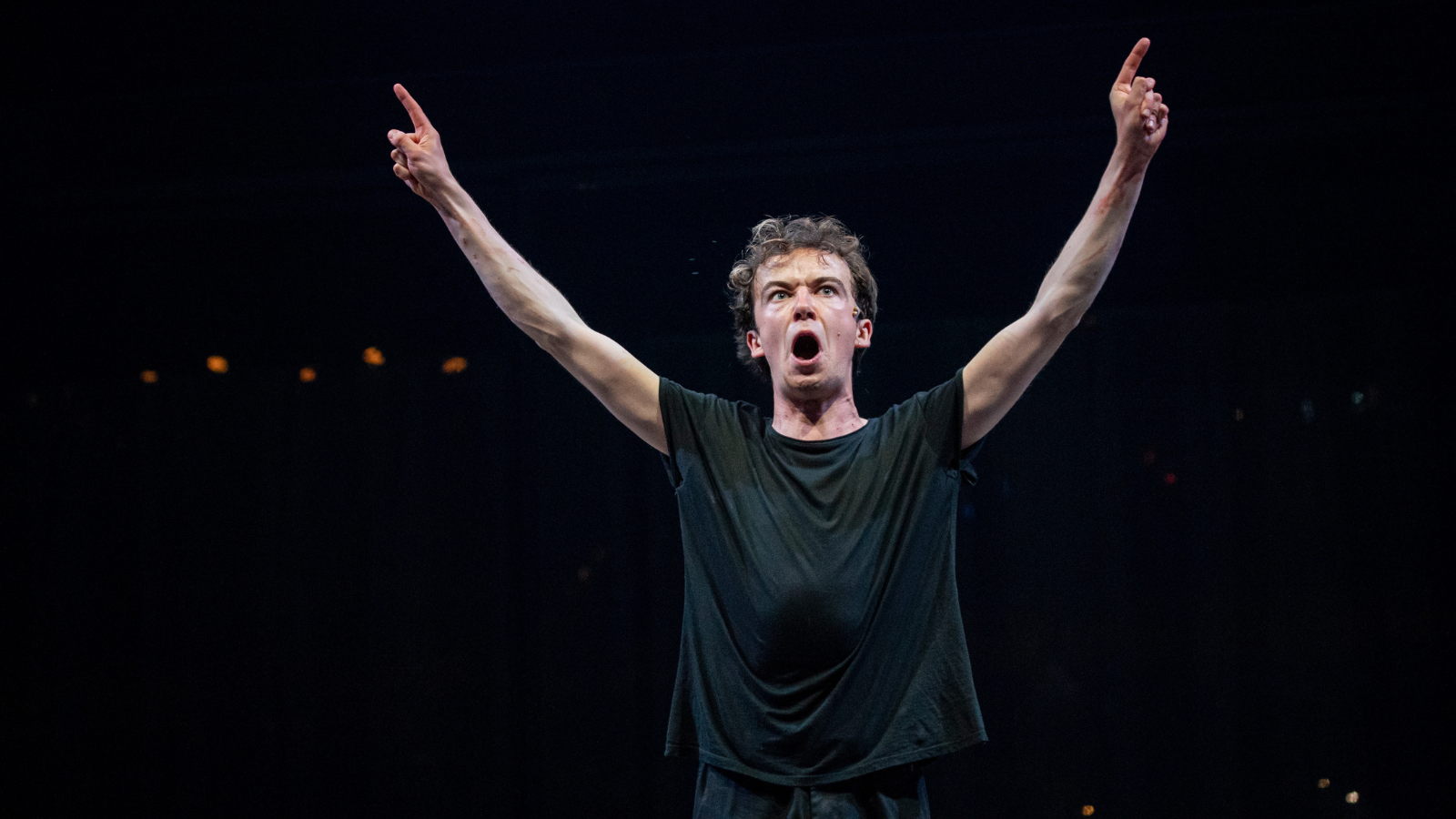 Sprawled out on a leather couch, draped in moody teen all-black clothing, Hamlet idly leafs through a book entitled Houseboy, by Ferdinand Oyono. Asked what he is reading, the despondent Prince waves it vaguely in the questioner’s direction, letting the pages float open and close without a care: “Words, words, words.”

But in fact, it’s all about the words in Robert Icke’s lean, precise staging of Shakespeare’s arguably best-known and certainly over-produced work. New York audiences were not dying for another Hamlet, and understandably so. Yet following Sam Gold’s muddled, confusing 2017 iteration at The Public Theater, it’s a relief to take in a production with such clarity of focus, clearness of language and–no snark intended–such clear enunciation.

It’s not that Icke’s staging, which makes its Covid-delayed transfer to Park Avenue Armory following an acclaimed Almeida premiere in 2017, is strictly traditional. (What even is a ‘traditional’ Shakespeare staging anymore?) The dress is modern. The palace, sleek and shiny. Hamlet’s father makes his first ghostly appearance on surveillance cameras, a flickering black-and-white form from the beyond.

But all of Icke’s present-day touches, and most of his (few) adjustments to the play, are strictly in service of drawing out the text. Glass on all sides evokes a life lived in public, with the grieving young Prince constantly on view. Live video reminds us of the happy fictions which Hamlet’s mother and uncle seek to present to the outside world. The austere modern space is as stifling as it is vast, a very elegant cage for a boy with nowhere to turn.

Alex Lawther, a little lad, squirms and writhes his slim frame to delightful effect as Hamlet confronts overwhelming terror, fleeting joy, and, of course, constant uncertainty. What is the right thing to do? Is there such a thing as right? Does he control fate at all anyway? Lawther cuts a sad figure but can be hilarious, as when he flings himself over a couch to avoid detection like a chipmunk leaping into the tall grass.

Lawther’s Hamlet gradually shrinks into himself, even as his revenge plot supposedly barrels forward. Withdrawing from the world, he seems to grow smaller before us, his vigor seeping away as doubts take terrifying hold. In Lawther’s hands, the distinction between Hamlet’s “real” self and his performance of madness at first seem clear cut–a feigned insanity put on for doddering Polonius is dropped in a flash when friends Rosencrantz and Guildenstern arrive.

But as events spin out of control, he lets the lines blur. Why such cruelty to Ophelia, or to his mother? Is it all part of the act? Does he even know himself? Lawther suggests not. His Hamlet only suggests clarity in the final act, at which point he seems to have accepted his inevitable doom. Only then can he sit with a grave digger and, quietly, truly consider death. In his hands, “Alas, poor Yorick,” provokes not knowing titters, but a somber recognition.

A mostly stupendous ensemble supports him. Angus Wright makes a commanding and oddly likable Claudius, as likely to gain your vote as plot your murder. Peter Wright’s Polonius is sweetly useless, a nice counterpoint to typically broad interpretations. And a particular standout is Joshua Higgott as Horatio, whose close bond with Hamlet is more keenly felt here than one normally finds.

The women of the play get shorter shrift–not a new problem for Hamlet, but nor is it one that Icke seems equipped to solve. Jennifer Ehle was a late addition to the cast as Gertrude, and it unfortunately shows. Mother and son’s confrontation in Act III is one of few scenes where Icke’s hand feels unsteady and the takeaway muddy. To what degree Gertrude truly hears her son, or understands the depths of his pain, feels unclear.

Kirsty Rider is stronger as Ophelia, but is saddled with an unfortunate concept for her final moments. The scene typically sees a broken Ophelia absently handing out flowers and herbs, but Icke here repurposes “rosemary” and “pansies” as descriptors for various self-inflicted bruises on Ophelia’s person, an inauthentic notion which feels tacked-on.

Elsewhere, Icke’s toyings with the text are more successful. Especially brilliant is having Hamlet face Claudius on his failed first revenge attempt, rather than lurk unseen behind. Claudius acknowledges a gun in his face yet mostly ignores the boy all the same, his silent disinterest proving more deflating than any words could. As he walks away unharmed, Wright delivers a terrifyingly triumphant, Earth-shaking laugh.

Admittedly, even with Icke’s tinkering, none of this qualifies as radical stuff. All that ends up feeling radical is the straightforwardness of the thing, the plentiful space provided for old Will’s gorgeous language to shine through unadorned. With that sincerity comes not only a clear understanding of the words (a hurdle in itself), but wondrous clarity of feeling. Betrayal, uncertainty, madness–when the words sing, these are not concepts but felt things, exquisite as they are heartbreaking.

Each time Hamlet speaks to us, Lawther does so from the same spot. Each time, the same faint glow spreads out from stage to seating, joining us with him in a shared warmth. “Am I a coward?” he asks in one such monologue. He tilts his head forward expectantly, as if an answer might come back. Alas, only vast silence. Someone give this poor boy a hug.

Hamlet is now in performance at the Park Avenue Armory in New York City. For tickets and more information, visit here.