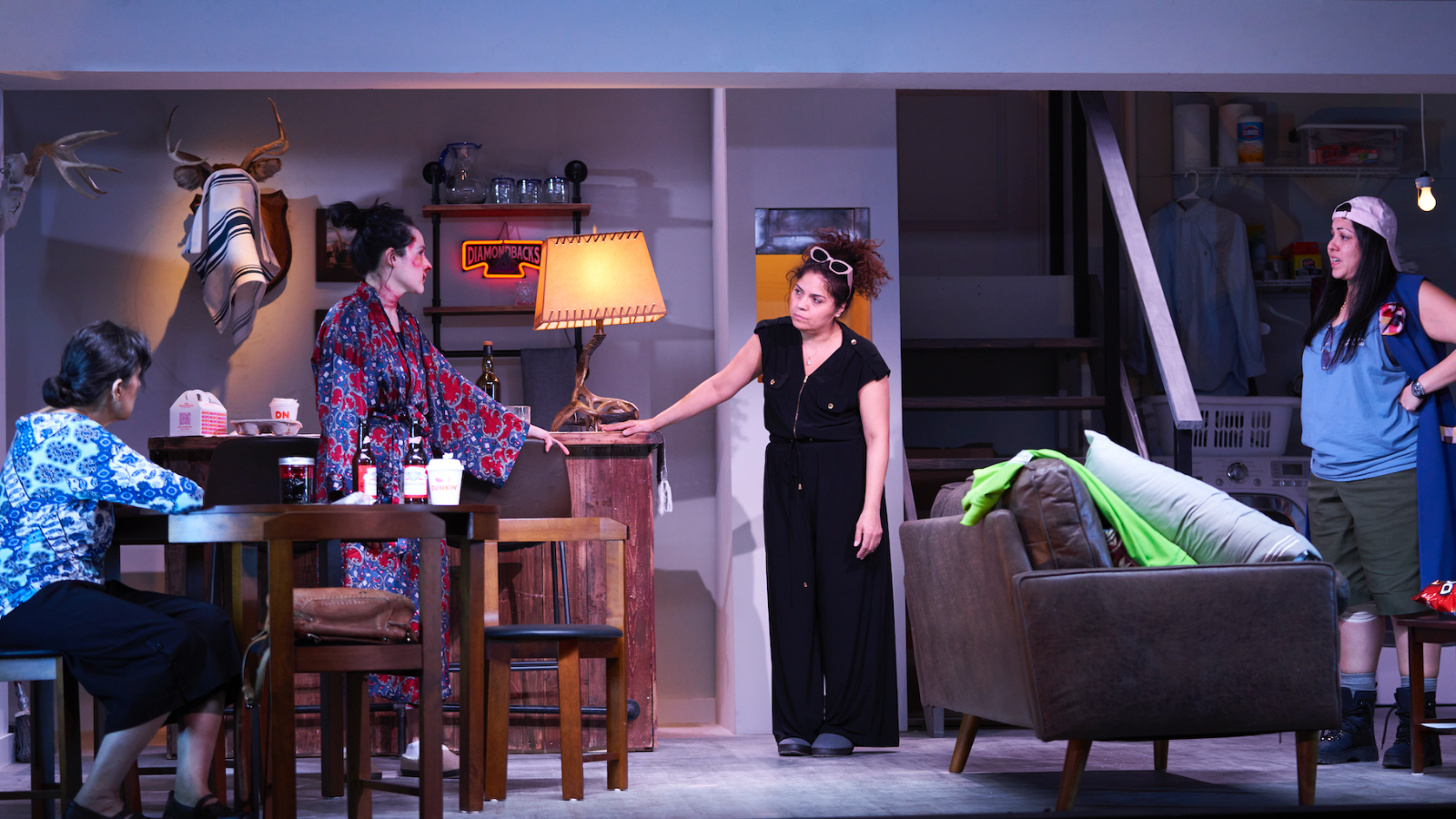 By
Jerry Portwood
No items found.
on
Category:
Reviews

The guy to my right was literally on the edge of his seat as sounds of ominous thunder and rain filled the small theater, so that when the next surprise lighting and sound effects hit, he jumped back, like he was smacked, and laughed nervously. That’s the type of audience response one hopes for in a horror show. And for many, Man Cave will deliver enough surprises and creepy thrills to satisfy the need for a little visceral fun. But John J. Caswell Jr.'s supernatural dramedy, currently playing at the Connelly Theatre in New York’s East Village, wants to be much more than a genre spectacle.

Having set the play in the basement of a Republican Senator’s home in Sedona, Arizona, Caswell sets out to explore the complicated hypocrisies of the region’s various demographics, and director Taylor Renolds keeps things moving along briskly. The three Mexican American women at the center of this story—Imaculada, Lupita, and Rosemary—all work in domestic service, but are experiencing their own conflicts. Since Imaculada (Annie Henk) began working as a housekeeper for this rich family, she got gastric bypass surgery, wears flattering dresses, and drives a Tesla. But she isn’t content since she knows something sinister is possessing the home. When Rosemary (Jacqueline Guillén) and Lupita (Claudia Acosta) barge in unexpectedly, things get tense since Rosemary is bloody and bruised from the latest fight with her husband, a white police officer. She then reveals her plan to exact revenge by using blood from a goat and his fingernail clippings in some sort of ritual. Although Lupita supports her friend and wants her to leave him, she isn’t buying this latest ploy: “You're over here denouncing your heritage, acting like you weren't one trimester away from living in Sonora the rest of your life. Now you wanna take it all the way back to the magical homeland con brujería?”

The next morning, they are joined by Rosemary’s mother Consuelo (Socorro Santiago), who hopes to help her daughter escape town but is soon conscripted into using her own innate psychic powers. Things get zany as the supernatural elements escalate with props banging and falling and glowing mysteriously. Caswell’s dialogue pulls no punches either, sometimes straining credulity with hyper-articulate critiques, like when Lupita succinctly blasts Imaculada’s car choice for funding the “astronaut ambitions of a billionaire manboy with the face of a blob fish…” But we’ve left realism behind long ago, so just strap in and enjoy the ride. Or as Lupita chides: “Oh my God, please, I saw this movie twenty different ways back in the ‘80s.”

After Rosemary gets the spells pulled up—“On her MacBook of Shadows,” Consuelo quips—and invokes the magic words, things get even weirder, until the ritual is over. Are the women finally free? Are the bad men going to pay for their crimes? The final scene, performed in Spanish (with English supertitles projected on the set), is poignant and a surprisingly satisfying resolution for the Latina actors portraying the various roles. Although the final outcomes are left ambiguous, and the women question whether any of it was real, they all leave together, deciding to take a much-needed vacation. No matter what, the world has changed for them and they’ll never be the same.

Man Cave is now in performance at the Connelly Theatre from Page 73 in New York City. For tickets and more information, visit here.

Jerry Portwood is a writer, editor and critic who's been covering theater and culture for over two decades. He was formerly the Digital Editorial Director at Rolling Stone, Executive Editor of Out magazine, Editor in Chief of New York Press, and founding editor of CityArts and teaches at the New School.