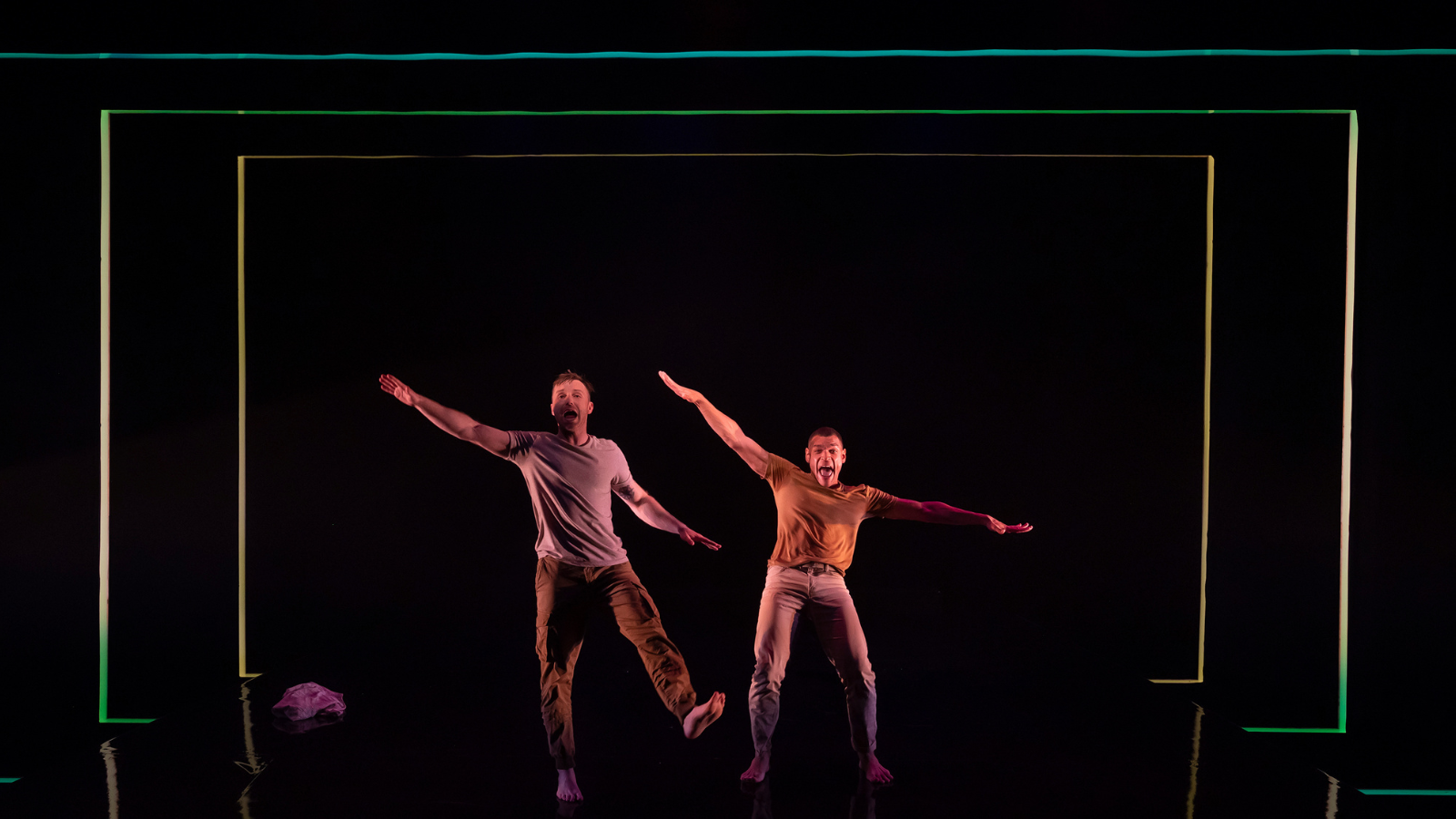 There’s a scene midway through Benjamin Benne’s play In His Hands, now having its world premiere at Washington D.C.’s Mosaic Theatre, that struck me as simultaneously liberating and terrifying. Onstage, two queer men Daniel (Michael J. Mainwaring) and Chris (Josh Adams) are making out. Suddenly, Daniel pulls away to nervously admit that he has a medical condition causing scars on his chest. Chris, instead of being repulsed, asks to feel the scars. When the two men touch each other again, a spiritual recognition passes between them that feels both attractive and dangerous.

Watching the scene, I was reminded of the Carravagio painting “The Incredulity of Saint Thomas,” which similarly depicts the touching of scars between two men (in Carravagio’s case, it’s between Jesus and his apostle John, who touches Jesus’s crucifixion scars out of disbelief). In Carravagio’s depiction of the Biblical story, there’s something undeniably queer about the intimacy between Jesus and Thomas; it’s a physical affection that verges on the carnal.

At the same time, there’s a religious violence churning in the painting that goes beyond Jesus’s scars. Queer Christian men, like Daniel and Chris in In His Hands, are constantly presented with images of two men touching each other in sanctified ways. But to actually hold another man in real life—to consummate attraction with even a touch—is often considered a sin within the church.

It’s this Christian tension between tenderness and repression, sparked by the touch of two men, that animates In His Hands. Throughout his play, Benjamin Benne sublimely dramatizes spiritual and physical moments like those seen in Carravagio’s paintings. However, Benne places these moments in a contemporary and explicitly queer context, with his two protagonists both struggling in their Christian faith. The result is a superbly written and complex show, brought to lustrous life in this Mosaic Theatre production.

In His Hands (like the Book of Genesis) begins with a dark void. Although we soon settle into a specific time and place—Daniel and Chris’s meet-cute in Seattle, Washington—the sense of the eternal still lingers throughout the show. The rest of the play unfolds under a state of heightened realism. Daniel is a secretary for a tech company, who has ambitions to become a Lutheran pastor; Chris is a newly-arrived coder. Daniel falls for his new coworker quickly, and the first few scenes of the show play out like a flirtatious queer rom-com (a la Heartstopper or Fire Island). Per the rom-com genre, nothing is ever quite as simple as it seems, and outside forces start affecting our central couple’s budding love.

Although Daniel isn’t afraid of expressing his queerness fabulously, he is nervous about outing himself as a devout Christian (Daniel tells the audience in an aside, “if he’s like any other typical homonormative gay / he’s definitely about to ghost me”). A different kind of ghosting occurs onstage that Daniel wouldn’t expect, however. At every moment when Daniel and Chris are at their closest, two domineering men appear upstage (Sasha Olinick and Joe Mallon), who turn out to be Daniel’s therapist and father, respectively. These ghosts of Chris’s past punctuate scenes of romantic and sexual bliss, and force Chris to relive the conversion therapy and Christian upbringing he’s spent so long trying to forget.

Working in the tradition of plays like Chay Yew’s A Language of Their Own, Benne has created a lyrical show defined by the slow-burning queer intimacy between its two leads. Like Yew, Benne’s work is also formally inventive, maintaining a flexibility that allows for the show to jump quickly within time and space.

Particularly impressive are Benne’s use of lists throughout the script. They first appear as humorous asides to the audience, as when Daniel and Chris list absurd things as a way to get to know each other, such as their favorite Mario Kart tracks (don’t worry Nintendo fans,  Rainbow Road is given a wonderful spotlight). This list format is soon subverted by Olinick’s therapist figure, whose therapy-guided lists conflate homosexuality with horrors like beastiality and assault. For Benne to create a unique theatrical language and then flip it on its head is a stunning thing to witness.

The two leads of In His Hands ably carry out Benne’s words, never letting his lists feel dry or repetitive. As Daniel, Mainwaring is fabulously expressive, and thoroughly convinces both Chris and the audience why Daniel’s so committed to his faith. As Chris, Adams is more reserved, but still endearing, and down-right hilarious when frankly discussing sex.

Although Benne explores many topics throughout the show (including assimilation into predominantly straight institutions and whether love can exist across religious divides), Benne’s super-theme is touch, specifically how men touching other men is indulged in or surveilled by queer Christian bodies. To illustrate this theme, director José Carrasquillo stages moments of stylized choreography throughout the show, which adds a level of simultaneous abstraction yet rawness to the action onstage.

This movement is aided by the starkness of Tony Ciseck’s scenic design and William D’Eugenio’s lighting design. Their design elements work seamlessly to make Daniel and Chris feel like they’re floating in a black hole, one surrounded by concentric rectangles of pulsing light.

If there’s one place where In His Hands could improve, it’s in the characterization of Daniel. With the presence of Chris’s family and past onstage, the show quickly becomes a study into Chris’s interiority—and how white, Midwestern evangelism can corrode a queer person’s soul. Unfortunately, Daniel’s family is nowhere to be seen onstage, and they are only mentioned briefly in dialogue.

Some scenes in the play indicate that Daniel is somewhat of an allegorical figure, a potential savior figure in Chris’s life. I wished that despite his allegorical status, Daniel emerged as more of a real person. The script only notes him as a “person of color,” so we don’t get any of the cultural, regional, or even racial specificity that Chris is given. If Benne had written Daniel as specifically Black—or Latinx, or Asian, or any other specific race—it would’ve gone a long way to making his character more fleshed out. It’s a shame, because through Chris, Benne has shown himself as particularly adept at crafting rich backstories for his characters.

Still, I walked away from In His Hands not thinking as much about Chris and Daniel’s backstories as much as I did the vivid, painterly stage pictures Benne and his collaborators have realized onstage. Important moments of the script take on a near tableaux effect. They’re indelible images that still burn like candles in my mind; this production uses a chiaroscuro lighting approach that renders Mainwaring and Adams’ bodies incandescent.

My favorite of these tableaus comes early in the play: Daniel and Chris lie down not side by side, but facing away from each other, their heads leaning against each others’ shoulders and their arms outstretched, hands clasped. They’re both in the same position as Jesus on the cross, and the image feels unspeakably tender and also unnervingly strange.

It’s moments like this where Benne and his production team surpass recreating Christian imagery, and venture into something deeper. You won’t find many of the kinds of touch between Daniel and Chris in any Biblical story or Renaissance painting. Yet Christianity is how Daniel and Chris arrived to intimate touching in the first place, and there’s a divinity to be found in their queer love, too.

In His Hands is playing in Washington D.C.’s Mosaic Theatre through July 17, and is streaming on demand from July 6 through July 17. For tickets and more information, visit here.