Nick Adams’ Character Is Queer and Catty in FIRE ISLAND 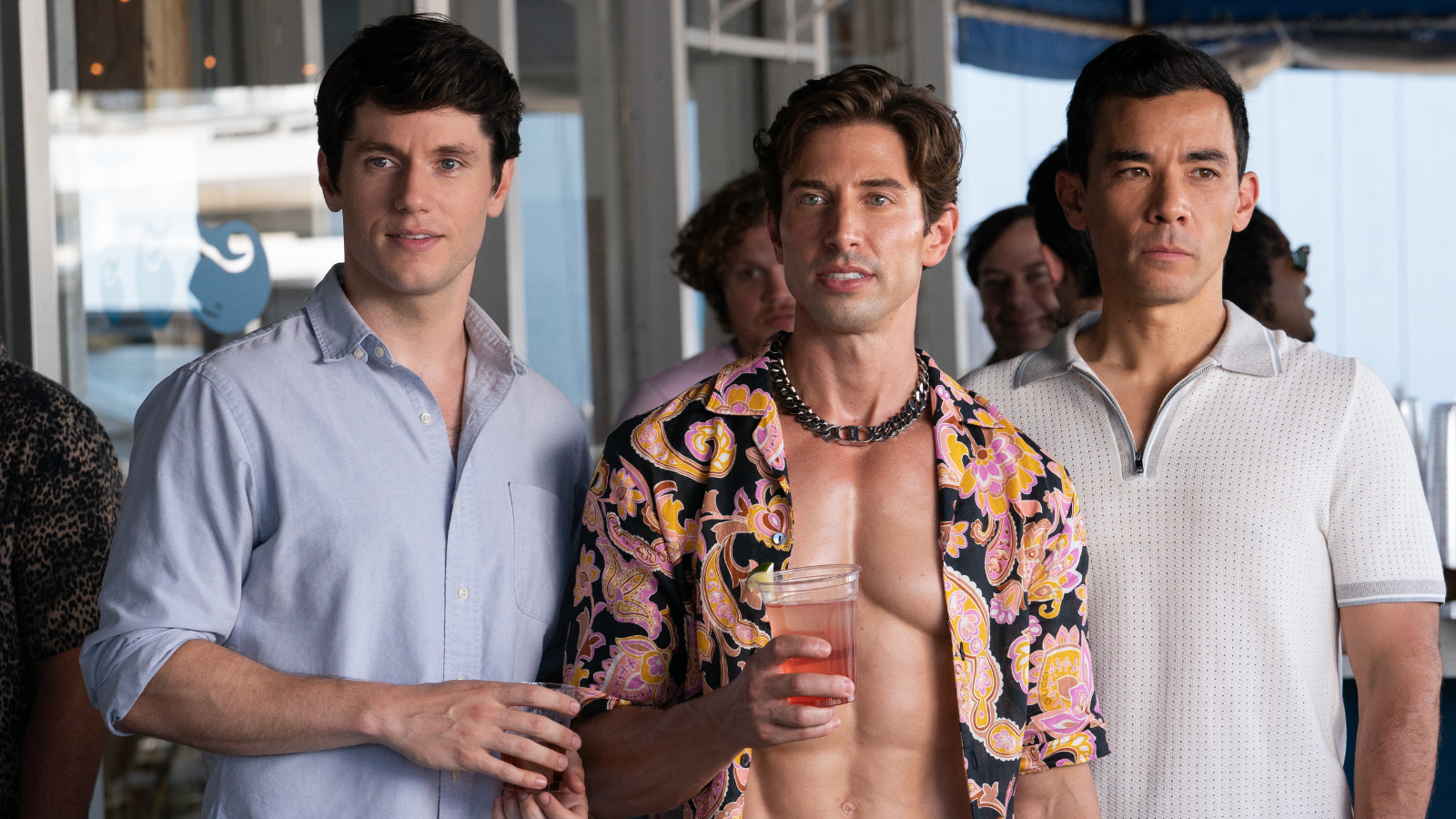 Jane Austen fans might recognize Nick Adams’ character in Fire Island, Cooper, from a certain novel. The movie is inspired by Pride and Prejudice with Cooper serving as the parallel for Caroline Bingley with a queer twist.

Whether communicating disdain solely through a glare or bemoaning the fact that he’s forgotten his mother’s birthday—again!—Cooper is an excellent foil in this summer rom-com. Below, Theatrely chats with Nick about playing a villain, the state of queer cinema, and his upcoming star turn in Drag: The Musical.

Did you have conversations behind-the-scenes as you were developing your character?

It was completely intentional to touch on the real experiences that we have, not only within the gay community and the LGBTQ+ community, but also exclusively in the microcosm that is Fire Island. It’s a world that exists where there’s no straight people, really, so you don’t have that oppression on top of you—just the one that exists within the community. [Fire Island] is able to explore the complexities of what it is to navigate those little microaggressions and classism that exists between us in the way that we oppress each other… but [it doesn’t] point a finger at one specific type of individual. It just lays the facts on the table. In the true form of Pride and Prejudice, the people that are making the assumptions and have issues with everyone on the island are flawed.

I found it refreshing to have a character be so blatantly vicious.

It was a blast to get to play a departure from what I normally do. To play a villain and something that is so far from yourself, I think, is sometimes the most fun to play. People will be like, “I know that person.” They’ve met that person at a bar or on the island or at the gym. Everybody comes in contact with him in some way in their lives. And I definitely have. [laughs] He’s such an awful human. There were some other scenes that didn’t make the final cut where you kind of got to see a little bit more as to why he behaves that way. But I think it’s really smart that they streamlined the story to just show that he doesn’t need to have any redeeming qualities.

It was everything because it came at the end of this shutdown of our industry. So, for me to not have really done anything creatively for almost two years and then to be given that gift was so special. I think when you watch it, you can tell how close we all actually are. It really felt like a little family at gay summer camp. Everyone was so accessible, real, and down to earth with no ego involved. The whole process was just so fun! I really wish it was longer, it was the fastest two months because [I was so] eager to be there and happy to work with everybody.

It is really like a love letter to the island and the choose-your-own-adventure experience that you can have out there. Even the beginning, that opening sequence of first seeing the island, my friends saw it and they turned to me and said, “That’s exactly what it feels like!” They did such a beautiful job of really capturing that. It’s so sunkissed, too…visually, it looks like an art film. The takeaway that I’ve been getting is, “Wow, this is way more than I expected.” It’s sexy, funny, charming, and it has something to say. It feels like it’s a historic moment in queer cinema… I’ve been a part of some really important gay works in theatre in my career. So now to translate that to film and to be a part of something, it feels so large. The weight of it, I’m really paying attention to that. It’s an honor to be a part of this ensemble cast.

What would you love to do next?

I want to do more more gay storytelling, honestly. Somebody asked me the other day, "are you afraid of getting typecast?” That statement is such a outdated product of the heteronormative culture that we have existed in, especially in entertainment, where you’re afraid if you do too many gay roles or something, that you’re going to be pigeonholed, and I’m like, “Bring it.” [laughs]. I feel like I’ve carved a path for myself by leaning into who I am. It’s been a tool…a way in for me as opposed to a hindrance. I want to tell more gay stories. And if I never play a straight person again, I don’t care. I’m about to start working on a new musical where I play a drag queen once again and I’m thrilled about it.

Tell me more about Drag: The Musical!

I star opposite Alaska ThunderFuck, who is one of the writers, along with Tomas Costanza and Ashley Levy. They crafted the score first and then wrote a book and they pitched it to me last summer. Spencer Liff is directing and choreographing it, and we have a lot of history together, coming up as dancers at the same time on Broadway…we worked together on Falsettos a couple of years ago, which was amazing. So he contacted me and said, “Look, there’s this project that I’ve been kind of toying around with and I’ve become a part of it, and I thought you’d be perfect for this role.” The story is about these two rival drag clubs that exist across the street from each other and they have to unite because they both are facing financial troubles. And the two owners of the clubs, myself and Alaska, are mortal enemies that have a very sordid history, but we have to unify to save each other. It’s high camp and crazy. The score is really fun, kind of like Rocky Horror meets the Sex Pistols meets Green Day. I’m going to be in full drag again for this presentation, which I haven’t done since Priscilla, Queen of the Desert.

Can we hear any music from the show yet?

We recorded a studio album, which came out May 13. I’m doing a workshop presentation in L.A. in June and hopefully it goes much further beyond that. My favorite song is “She’s All That.”